June 11, 2018 Michael J. Roberts
While shooting a TV commercial in Los Angeles, actress Marla Frees was given a message. The father of the actor sitting across from her wanted the actor to know he was happy about the new baby.
But there was a twist—the father was deceased.
The actor was shocked. Frees was “God-smacked.” As she writes in her rollicking, utterly fascinating new memoir, American Psychic, this was just one more example of the strange yet love-infused events taking place in Frees’s life.

Today, Frees is a former actress, new author, and she uses her gifts as a psychic medium to help families from the heartland to Hollywood find healing. 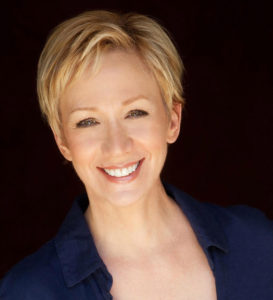 Meet and be amazed by Marla Frees, author of American Psychic, at a special evening hosted by Jim Corti, Frees’s longtime friend and Artistic Director of Paramount Theatre, Saturday, July 14, at 7:30 p.m., at the Copley Theatre, 8 E. Galena Blvd. in downtown Aurora.
Frees and Corti will lead an on-stage discussion about listening to your intuition. Frees will then work with the audience sharing her psychic and mediumship gifts.

Tickets are $20, or $35 for the show plus a signed copy of Frees’s new book American Psychic. Following the show, a reception will be held at 9:30 p.m. in the Atrium just outside the Copley Theatre.
To reserve tickets or ticket+book packages, visit ParamountAurora.com, call the box office at (630) 896-6666, or stop by the Paramount Theatre box office, 10 a.m. to 6 p.m., Monday through Saturday.
More about transformational psychic medium Marla Frees
Marla Frees spent 25 years as a successful TV and stage actress with roles on Seinfeld, Married with Children, Everybody Loves Raymond, Cybil, Roseanne, Murphy Brown, Diagnosis Murder, Strong Medicine, The Drew Carey Show and a recurring role on Lois and Clark: The New Adventures of Superman, to name a few.
In Chicago, she was nominated for a 1990 Joseph Jefferson Award for Best Supporting Actress in a Musical for her role as Lina Lamont in Singing in the Rain at Drury Lane Theatre in Oakbrook Terrace, Illinois.
Increasingly messages from deceased loved ones, and a powerful psychic awareness psychic awareness demanded her attention. Frees followed her heart, left acting and never looked back.
Today, Frees is able to see, hear and feel information that provides truly unique insight about any aspect of a person’s life – their family, health, work, home, relationships and even pets.
It is also Frees’s experience that consciousness survives death. She can facilitate relationships between the living and those who have crossed over. Frees can hear what the dead have to say, she can feel their emotions and she can see what they want to show us.
Frees’s new book American Psychic: A Spiritual Journey from the Heartland to Hollywood, Heaven, and Beyond was just released on June 5, and it is filled with stories of spiritual transformation that take readers into realms that astonish, inspire and heal.
It’s the story of a Pennsylvania pig farmer’s daughter who survived danger in her home and later in the world of national and international mobsters and then landed in Hollywood where she balanced sitcoms, spirits and a stalker.
“I was on the ride of my life. Dead people, murder, Hollywood heartthrobs, sex, psychic visions, and UFOs were all a part of it. I found myself catapulted and positioned into situations with psychic awareness and messages from deceased loved ones to assist people from all walks of life—including the most skeptical,” says Frees.
Ramey Warren, co-creator of Crossing Over with John Edward, called American Psychic a “brilliant and inspiring read from one of the most respected and gifted psychics in the country.”
Frees has appeared as a psychic medium on A&E, Bravo, History Channel, SyFy, TV Land and Gaia TV’s Beyond Belief with George Noory. On the radio, Frees has appeared on George Noory’s Coast-to-Coast, Lisa Garr’s Aware Show and dozens of international podcasts. She is a co-host on Unknowncountry.com’s Dreamland.
Most recently she appears in YouTube teleconferences with physicist and author Tom Campbell, blending physics with metaphysics to understand the “science” of how Frees works, making the paranormal—normal.
For more information, visit americanpsychicbook.com or marlafrees.com.
About the Copley Theatre
The Copley Theatre is an intimate, 173-seat live performance venue in the heart of downtown Aurora. It is one of three live stages programmed and managed by the Aurora Civic Center Authority (ACCA), which also oversees the Paramount Theatre, located right across the street from the Copley at 23 E. Galena Blvd., as well as RiverEdge Park, downtown Aurora’s summer outdoor concert venue at 360 N. Broadway.
In 2019, ACCA will also open the new Paramount School of the Arts in the John C. Dunham Aurora Arts Center, currently under construction adjacent to the Paramount. The new school will encourage and train young actors, dancers and musicians for a culture-filled life, nurture the arts in Chicago’s western suburbs and add to the excitement, cultural and economic activity in downtown Aurora.
Registration opens in the fall for a full roster of classes, private lessons and camps in acting, music and dance to launch in early 2019. Courses for children as young as six months will be offered with opportunities for adults and seniors, as well.
For more, visit ParamountAurora.com or call (630) 896-6666.