Chicago native Caroline Baran discusses winning over the America’s Got Talent judges with her soulful rendition of ‘Take Me To Church’ on the June 5, 2018 Audition round. On the heels of the most viewed season in five years, the 13th season of “America’s Got Talent” is back and premiered as the #1 digital reality competition show season premiere of 2018 with creator and judgeSimon Cowell, Mel B, Heidi Klum and Howie Mandel.

Supermodel, entrepreneur and CEO Tyra Banks joins the team as host, and the series returns to Los Angeles with live shows from the famed Dolby Theatre.

About CAROLINE BARAN (From socicbids.com):

Caroline began her singing career at her mom’s school, ABC Music Academy, where she spent most of her time as a child. Her mother, Joanna, is a piano teacher and showed Caroline the wonderful gift of music. Caroline started playing instruments ever since she was 7. At first, she played the piano and gradually more instruments started coming in the picture.  And at age 10 she sang at a singing group in her mom’s school. 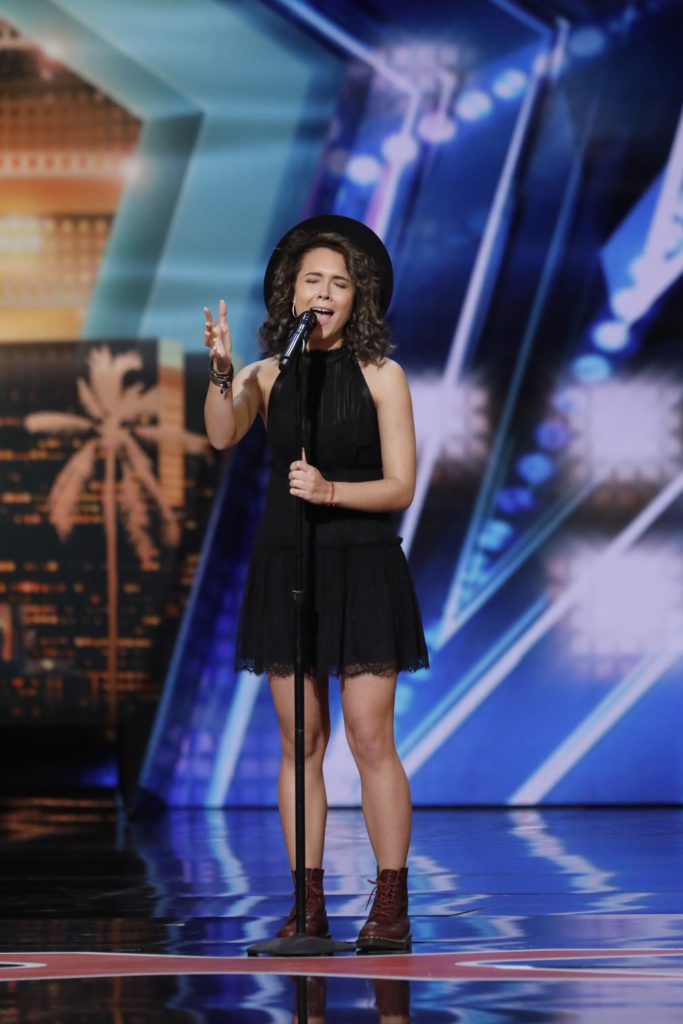 Caroline has received many awards from various competitions. 2011, Council of Educators in Polonia gave Caroline the award of “The Winner of the Ninth Annual Talent Show”. 2015, with her band Profusion, Caroline received the title “Artist of the Year 2014” from the polish radio (92.7fm). In 2015 she also received the same award “Artist of the Year 2015” but this time with her partner Daniel Jonak. Baran had great achievements in England when winning the Top Polish Charts with her cover of Creep. 2015, along with Profusion, Caroline received three awards on the Krzysztof Klenczon Festival in Pultusk, Poland. As well as getting an individual award from the director, Pawel Sztomka, for her outstanding vocals during the competition.

Caroline’s young age is a big factor of why a lot of people are paying attention to her talent. She has performed at multiple stages like House of Blues, Park West, Copernicus Center, and much more. She does not only perform in Chicago. She has also performed in Texas, Minnesota, Los Angeles and more. She also travels to Poland and plays a few concerts there. She has gone too many workshops to expand her musical knowledge. She went to Los Angeles, Hollywood (Musicians Institute) for three years now. For the first two years she took vocal workshops, but the third year she took an independent artist program so she can learn how to be a better individual in the music business. Summer 2016, she graduated from a jazz workshop in Pulawy, Poland. She attends many other workshops so she can learn more about her craft. Caroline takes music theory classes so she is not only known as a singer but as a well rounded musician.

She was part of a teenage rock band, Profusion. She played the bass and sang lead vocals in that band. She is involved with another band called CTP, Caroline & the Priority. This band lets her showcase more of her soul side and really shows what a rich voice she has.

AMERICA’S GOT TALENT Tuesdays at 8/7c on NBC

With the search open to acts of all ages and talents, “America’s Got Talent” has brought the variety format back to the forefront of American culture by showcasing unique performers from across the country. The series is a true celebration of creativity and talent, featuring a colorful array of singers, dancers, comedians, contortionists, impressionists, jugglers, magicians, ventriloquists and hopeful stars, all vying to win America’s hearts and the $1 million prize.

Season 12 has over 2.7 BILLION (yes that’s billion – with a BB!!) video views! Last year’s winner, Darci Lynne was YouTube’s 4th Top Trending GLOBAL Video of the year and well over 250 million Facebook views. The show was the Sixth Most Popular TV Show on the Internet for 2017.