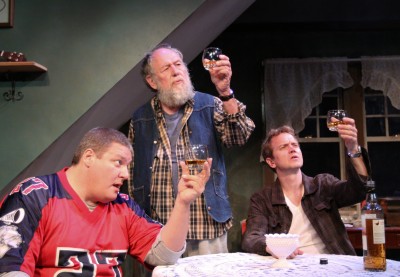 Sometimes in life, you just have to take a breath and let things that bother you go. Holding a grudge can have a devastating effect on a person’s psychological state of mind. Playwright James Still’s new play, Illegal Use of Hands, which is having its world premiere at the American Blues Theatre explores this conundrum.

Smartly directed by Sandy Shiner, Illegal Use of Hands tells an interesting but segmented story of two old high school football buddies, Cody (Steve Key) the handsome quarterback, who now prefers balls of another kind, and Roy (Howie Johnson), who is embittered by a bad call Vietnam vet Wallace (Dennis Zacek) made decades ago while refereeing the championship game. The “bad” call, which was an illegal use of hands, seemingly costs the team first place and because of that that, Howie has used that one event as an excuse for not being a success in life. Cody and Howie pay a visit to Wallace’s humble abode, for initially nefarious reasons. But through our old friend, a bottle of blended scotch, we see what emotional scars living an inauthentic life can have on a person.

The acting and pacing are quite good and every actor gets their moment to shine. The best moment is when Cody is told one of his high school “friends” committed suicide because he could not cope with the fact that he was different. Mr. Key mostly silent emotional break is riveting to watch. The problem is in the script itself which leaves three characters that you end up caring nothing about. There is no real plot development and the comedy and the drama never seems to come from any place of truth, which is unfortunate with the immense talent on the Victory Gardens’ stage.