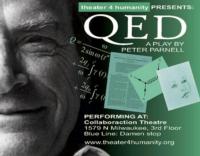 theatre4humanity, in association with Collaboraction Theatre, will present the Chicago Premiere of “QED” by Peter Parnell, a day in the life of maverick physicistRichard Feynman. Featuring Rob Riley as Feynman, “QED” opens Wednesday, October 24 at 8 p.m. at Collaboraction Theatre, 1579 N. Milwaukee Ave., 3rd Floor. For tickets visit
www.theater4humanity.com or call 866-212-4077.

Written byPeter Parnell, “QED” is an up-close and personal portrait of Feynman, Nobel laureate in physics, lifelong advocate for creativity and originality in science, as well as founder of the field of nanotechnology, and inspiration to young and aspiring scientists the world over. “QED” relives a day in the life of Feynman, storyteller extraordinaire, artist, musician, and well-loved character in 20th century science. theatre4humanity founder Maureen Payne-Hahner directs.

“I consider myself a scientist first and a theater producer second,” said Producer Dr. Christoph Hahner. “This play shows the many dynamic and artistic sides ofRichard Feynman. It demonstrates how closely related art and science are, as both require creativity, an open mind, curiosity, the willingness to experiment and to push the limits. Feynman was a scientist who established a milestone for the science world and ultimately the world we live in.”

Riley first portrayed Feynman in the 2010 production of “QED” produced by ETOPiA, The Engineering Transdisciplinary Outreach Project in the Arts, at the McCormick School of Engineering and Applied Science atNorthwestern University. Payne-Hahner also directed that production.

theatre4humanity combines art with humanitarian work, strives to give charities a platform while donating proceeds to selected entities.