A Gorgeous “Merry Widow” at Light Opera Works in Evanston 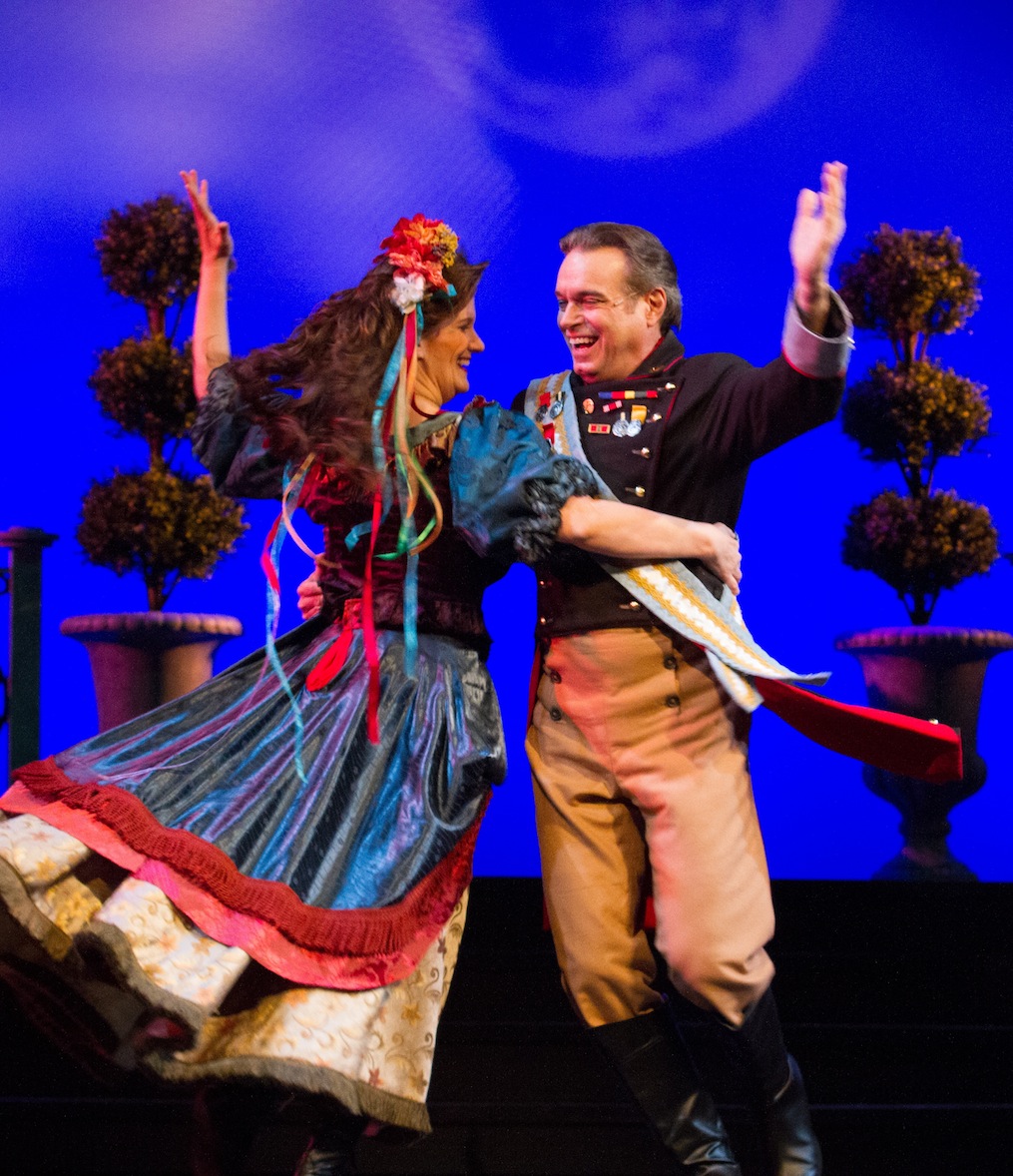 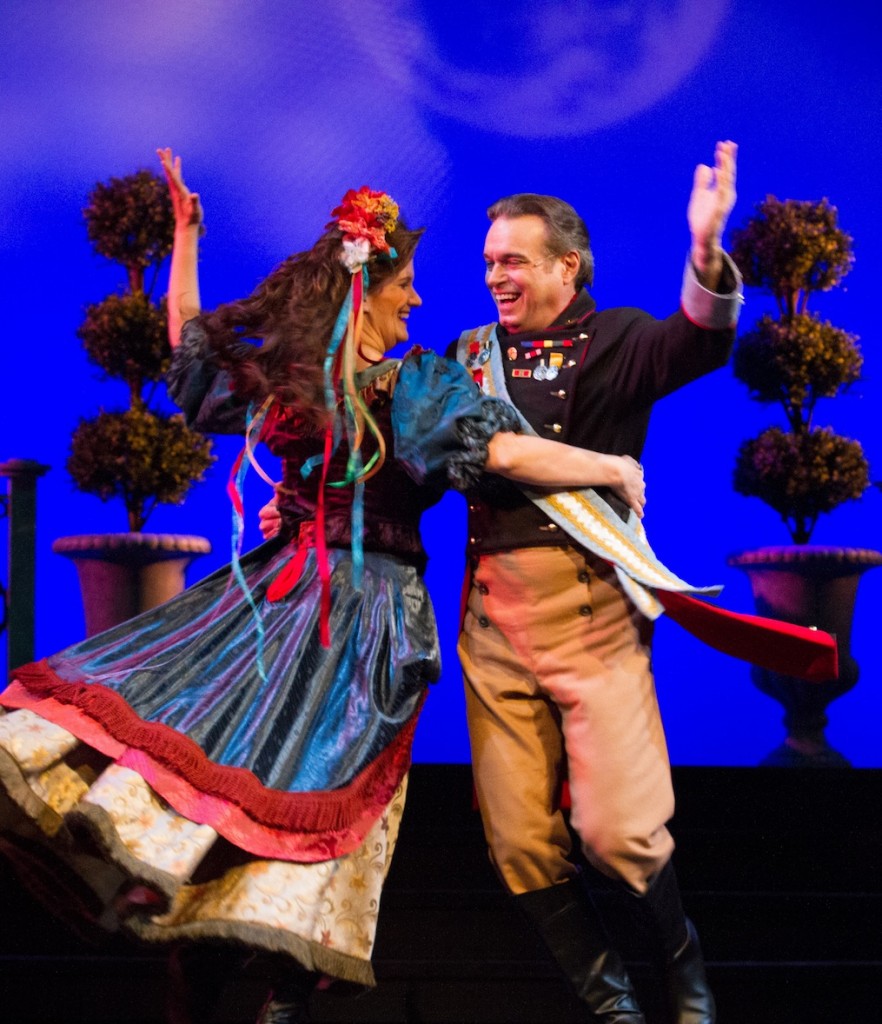 Light Opera Works in Evanston, Chicago’s premiere musical theatre staging the operettas of bygone days, has a real Christmas treat: a gorgeously sung, designed and staged production of Franz Lehar’s The Merry Widow starring the magnificent Stacey Tappan and Chicago favorite Larry Adams, reprising their roles from the 2005 Light Opera Works production. With a clever new translated book and lyrics by Chicago playwrights Jack Helbig and Gregg Opelka taken from the original libretto by Viktor Leon and Leo Stein this Merry Widow indeed lives up to its name.

The Merry Widow by Viennese composer Franz Lehar took the world by storm when it originally premiered at the Theater an der Wien in 1905 and launched new women’s fashion and hairstyles and intoxicating the world with the beautiful Merry Widow Waltz. Today it is hard to imagine an operetta having such a tremendous impact on the world but along with the music it is the love story about two middle-aged people who have been in love for years and never said the words “I love you” getting a second chance.

The plot revolves around Hannah Glawari, the merry widow, (sung beautifully by soprano Stacey Tappan) whose husband died and left her with millions. The handsome Count Danillo (played to perfection by Larry Adams in one of his signature roles for Light Opera Works) and Hannah had a brief but intense love affair and wanted to marry however Danillo’s family would not allow it because she lacked a fortune. Danillo gives in to his family and swears to remain a bachelor for the rest of life.

The secondary plot involves the womanizing Camille de Rosillon (a fine comic performance by operatic tenor William Dwyer) and his love affair with a married woman, Valencienne (played by the delightful Sarah Wasserman with a crystal clear soprano voice) who is married to the Baron Mirko Zeta (the incomparable Light Opera Works favorite Alex Honzen). Camille, who gets a rush from the danger of the affair carelessly writes the words “I love you” on her Valencienne’s fan which eventually falls into the hands of her husband, the Baron.

In Act 2 everyone is invited to Hannah’s country house outside of Paris. While Camille and Valencienne are having a secret tryst in Hannah’s summer pavilion the Baron is informed of the event but not told that it is his wife who is in the pavilion with Camille. He peeks through the keyhole and discovers it is. Hannah exchanges places with her to save her reputation and informs all that she is engaged to Camille. Count Danillo, who realizes he is still in love with Hannah storms off in jealousy to his place of escape, the famous Maxim’s, and Hannah finally realizes that he is still in love with her and sets off to Maxim’s to get her man.

Light Opera Works always casts some of the finest singers in Chicago while presenting the original score in tact which is played by a 30-piece, union orchestra. Director Rudy Hogenmiller has assembled a stellar ensemble of voices for this Widow and staged an absolutely gorgeous production. Some particular highlights of the evening are Hannah’s second act aria Vilia (handled magnificently by Tappan), the love duet between Camille and Valencienne and I Love You So, the gorgeous love ballad between Hannah and Danillo (which fires because of the chemistry between Adams and Tappan both physically and vocally). Veness’ sets are breathtaking (particularly the Act 2 gardens of Hannah’s estate and Act 3’s Maxims) and got applause when the curtain went up. Jesus Perez’s and Jane Debont’s costumes are rich and beautiful (with a few minor details that felt out of place and period) and Andrew Meyer’s lighting design provided an element of fantasy of a Technicolor movie from Hollywood’s golden era.

Under the baton of conductor Nyela Basney the orchestra provides the lush, full sound that, combined with the singers, soars and gives Lehar’s score flight.

Some standouts from this fine ensemble are Robert Quintella’s Vicomte Cascada’s Spanish diplomat and Tobias Wright’s Parisian diplomat Raoul de St. Brioche (what a hilarious name). The varieties of accents are very well done by all and remain consistent throughout (a first for Light Opera Works) and they handle Helbig’s and Opelka’s witty text quite well.

For those who appreciate beautiful and fine things, this Merry Widow is a jewel that you should rush out to see. It will thrill your ears, dazzle your eyes and touch your heart with its beautiful and timely story of love and second chances.