A Dazzling GUYS & DOLLS at Light Opera Works in Evanston 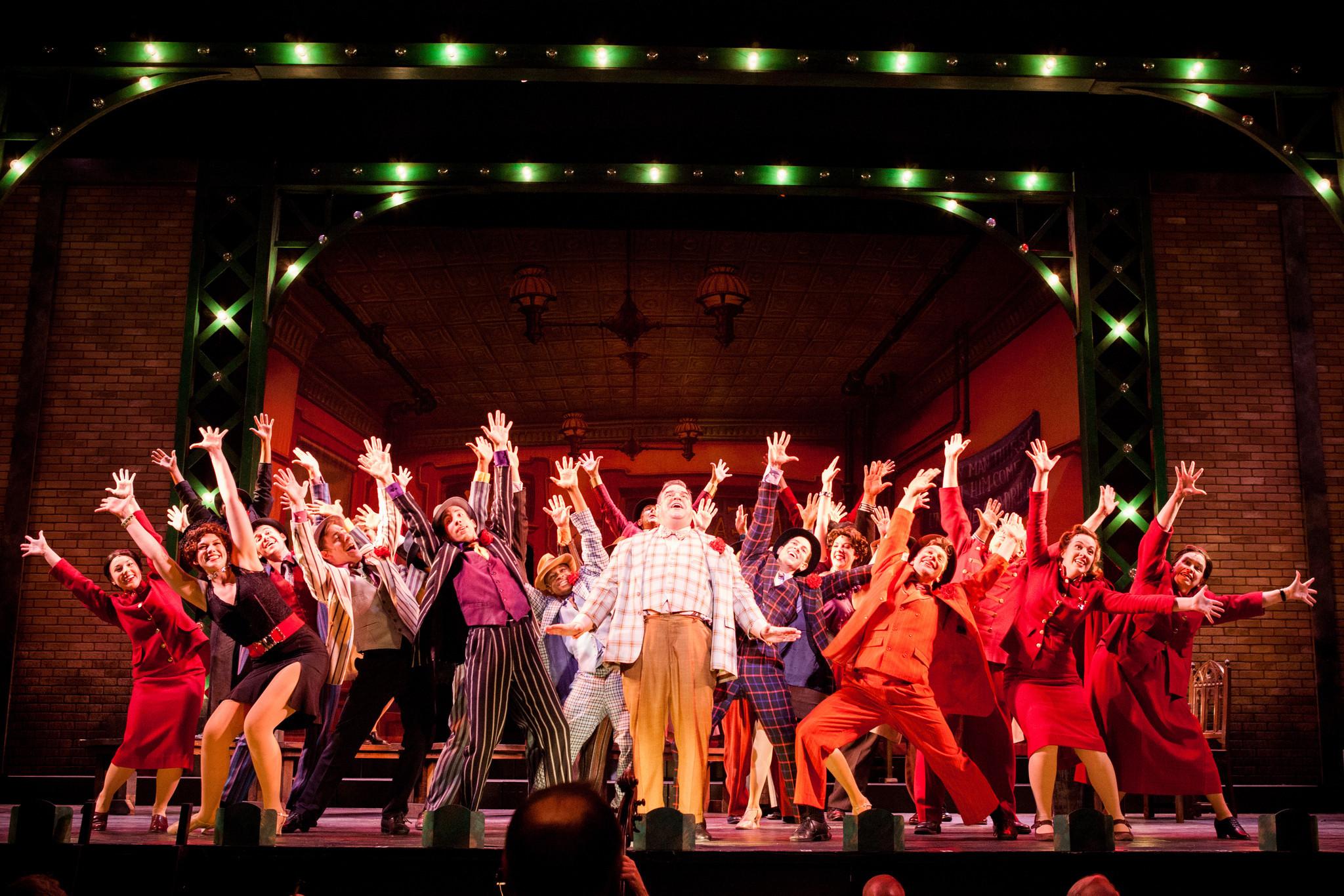 Frank Loesser penned what is considered by many the perfect musical, running 1200 performances and garnering the Tony Award for Best Musical for 1950. With a book by Joe Swerling and Abe Burrows and based on Damon Runyon’s stories of The Idyll of Miss Sarah Brown and Blood Pressure it tells the story of Miss Sarah Brown, her quest to convert the evil people of New York’s low life, and her expectantly falling in love with one of New York’s most well-known gamblers, Sky Masterson, who pursues her in order to win a bet. In the course of the musical we meet Nathan Detroit, another gambler who has been engaged to the Hot Box songbird Miss Adelaide for 14 years but has refused to wed her.

Guys & Dolls has one of the finest scores ever written for a Broadway musical, only to be rivaled by Jule Styne’s Gypsy. Hearing it performed with a stellar cast and orchestra under the superb baton of Shawn Stengel at Cahn Auditorium was a thrilling treat. Often revived it is seldom that I have seen the casting so spot on and director Rudy Hogemiller deserves the credit for finding men with faces that look like the gangsters one would see in 1950 New York. Combine that with the fact that they are extraordinary singers, actors and dances and you have a rare combination that allows the production to fire on all cylinders.

With a uniformly stellar cast the real standouts that I want to mention are Cary Lovett’s Nicely-Nicely Johnson (a part he was born to play and he plays it to perfection), Justin Adair’s Sky Masterson (beautifully sung and with the needed sex appeal for the role, if a tad young), Steve Silver’s Nathan Detroit (one of the best I have seen), Jim Heatherly’s Benny Southstreet (right out of Damon Runyon), Elizabeth Telford’s Sarah Brown (this girl has an extraordinary voice and great acting ability) and Sarah Larson’s Miss Adelaide (in one word “perfection”).

Choreographer Clayton Cross has provided the dancers with thrilling and well executed moves, capturing the Broadway spirit of Runyon’s underworld with “Luck Be a Lady Tonight” (a show-stopper) and the glorious eleven o’clock number “Sit Down Your Rocking the Boat”.

Adam Veness has once again provided a beautifully realized setting with a combination of painted drops and green steel beams equipped with lights that provide a polish and New York sensibility. Likewise Andrew Meyers’ lighting design brings Veness’ set to life with vitality.

Brenda Winestead’s costume design sticks close the original one that we have all come to know, combining the cartoonish with the realistic with just the right balance of each. She has a great eye for color which pops off the stage like a Technicolor movie.

Artistic Director Rudy Hogenmiller has once again raised the bar for Light Opera Works with his Guys & Dolls with another jewel in his crown. Following his stupendous, Broadway quality South Pacific is a feat unto itself but he has managed to equal the same success if not surpass it in some instances. Light Opera Works in Evanston has blossomed into one of Chicago’s finest musical theatre houses.

Guys & Dolls runs only four more performances through January 3rd at Cahn Auditorium so don’t miss it! It was sold out on the Wednesday matinee I attended. Tickets may be purchased from the Light Opera Works Box Office at 847-920-5360.