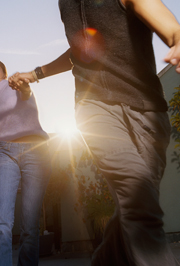 This is the ballad of Leila and Lee—a modern-day Bonnie and Clyde who learn that they aren’t alone in the world the night that they discover each other. Their wild ramble across the Scottish highlands in search of an absent father is told in a series of lyrical narratives that will immerse audiences in the action, forging a breathless drama of beauty in the darkness.

Stuart Carden comments, “Playwright David Greig is an exuberant and masterful storyteller who articulates the twists and turns of his jaw-dropping narrative with some of the most inventive, muscular, and lyrical language I’ve read by a contemporary playwright.  Little known in the U.S. but celebrated in the U.K. it is a distinct honor to be the first American company to produce Yellow Moon and introduce, within the intense intimacy of our bookstore space, this exciting playwright’s inventive and energetic style of theatre to our audience.

Greig is currently under commission to the Almeida Theatre and the National Theatre of Scotland. He is also writing the book of the stage musical Charlie and the Chocolate Factory (Warner Bros/ Neal St Productions) and an adaptation for the Broadway producer, John Hart.

He is working with Film Four on a screen adaptation of his stage play Midsummer. Other films include:Vinyan and A Complicated Kindness.

Stuart Carden (Director and Associate Artistic Director) returns to Books on Vernon where he previously directed Travels with My Aunt. Last season he directed Randall Colburn’s Hesperia at Tudor Court. This marks Stuart’s fourth season as the company’s Associate Artistic Director. A new play specialist, Stuart leads Writers’ Theatre’s Literary Development Initiative, which establishes a dialogue between the theatre and noted playwrights in order to commission, develop and produce new and adapted works. Before joining Writers’ Theatre, he was the associate artistic director of City Theatre Company in Pittsburgh. Recent regional theatre directing projects include Circle Mirror Transformation by Annie Baker, In the Next Room (Or the Vibrator Play) by Sarah Ruhl, Crime and Punishment by Marilyn Campbell and Curt Columbus andThe Lieutenant of Inishmore by Martin McDonagh (The Repertory Theatre of St. Louis), Blackbird by David Harrower, Mary’s Wedding by Stephen Massicotte, A Picasso by Jeffrey Hatcher (City Theatre Company),The Pillowman by Martin McDonagh, Martin Crimp’s adaptation of The False Servant and Stones In His Pockets by Marie Jones (Pittsburgh Irish and Classical Theatre). In Chicago with Silk Road Theatre Project, he directed the widely-acclaimed world premiere of Shishir Kurup’s The Merchant on Venice (a South Asian-American and Bollywood inspired adaptation of Shakespeare’s original), the world and regional premieres of Yussef el Guindi’s 10 Acrobats In an Amazing Leap of Faith and Back Of The Throat, as well as the Chicago premiere of David Henry Hwang’s The Golden Child Next season he will direct PigPen Theatre Company’s musical fable The Old Man and the Old Moon at Writers’ Theatre and Nina Raines’Tribes at City Theatre. Carden is an alum of Carnegie Mellon University and a member of the Stage Directors and Choreographers Society.

Ashleigh LaThrop (Leila) makes her Writers’ Theatre debut. Chicago credits include Metamorphoses(Lookingglass Theatre Company), In the Continuum (Pegasus Players), The Twins Would Like to Say (Dog and Pony Theatre Company), Comedy of Errors (Chicago Shakespeare Theater) and Cooperstown (Theatre Seven of Chicago). Regionally she has appeared in Metamorphoses (Arena Stage) and Crumbs from the Table of Joy (Renaissance Theaterworks). She also spent two seasons with American Players Theatre where her favorite productions include As You Like It, The Critic, Taming of the Shrew, The Cure at Troyand Major Barbara. LaThrop is a graduate of the University of Illinois and the School at Steppenwolf.

Karen Janes Woditsch (Jenni/Holly/Narrator) returns to Writers’ Theatre, where she most recently appeared as Hesione in Heartbreak House. Other Writers’ productions include Shelly in Do the Hustle,Emilia in Othello (After Dark Award Best Performance), Masha in The Seagull, Ann Butley in Butley, Rocket to the Moon, A Phoenix too Frequent and Spite for Spite, among others. Other Chicago credits include Julia Child in the world premiere of To Master the Art (TimeLine Theatre; Joseph Jefferson Nomination – Best Actress), Other Desert Cities, Crumbs from the Table of Joy, A Christmas Carol(Goodman Theatre), Chalk Garden, Pride and Prejudice (Northlight Theatre), Taming of the Shrew andMeasure for Measure (Chicago Shakespeare Theater). She toured one season with Montana Shakespeare in the Parks and has performed in seven seasons with Peninsula Players. Woditsch can be seen in Onion Webisode’s, the feature film Johnson, and will reprise her role as Julia Child in the re-mount of To Master The Art at the Broadway Playhouse in downtown Chicago

artists in the production and gain new insight into the work.

Writers’ Theatre is pleased to welcome back BMO Harris Bank as Season Sponsor of its 2012/13 Season. The Season Sponsor is Mary Winton Green and the Major Production Sponsor for Yellow Moonis Mary Pat Studdert. The Corporate Sponsor Partner is Consolidated Electronic Wire & Cable.

Over the past twenty seasons, Writers’ Theatre has become a major Chicagoland cultural destination with a national reputation for excellence. Under the artistic leadership of Michael Halberstam and the executive leadership of Kathryn M. Lipuma, Writers’ Theatre has been deemed the “best drama company in the nation” by the Wall Street Journal and achieved twenty years of surplus operations. The company, which plays to a sold-out and discerning audience of 35,000 patrons each season, has garnered critical praise for the consistent high quality and intimacy of its artistry. Prized for the finest interpretations of classic and contemporary theatre in its two intensely intimate venues, Writers’ Theatre’s acclaimed work includes Artistic Director Michael Halberstam’s world premiere in Glencoe and subsequent production of A Minister’s Wife at Lincoln Center Theater; David Cromer’s productions of A Streetcar Named Desire andPicnic; and the commissioning, world premiere and New York premiere of Crime and Punishment, which has received more than 30 subsequent regional theater productions.

In July, 2011, Writers’ Theatre announced the hiring of the award-winning, internationally renowned Studio Gang Architects, led by principle Jeanne Gang, FAIA to design a new home for the Theatre in downtown Glencoe which will once again allow the Theatre to grow to accommodate its audience, while maintaining its trademark intimacy. The new facility will resonate with and complement the Theatre’s neighboring Glencoe community and will add tremendous value to Chicagoland and the North Shore as a premier cultural destination.