It has been ten years since Wicked parked itself at the Gershwin Theatre on Broadway, and from almost the moment the Time Dragon clock starting counting box office receipts, the juggernaut has done over a million dollars a week and shows no signs of any decline.  After a three year run in Chicago (and two tours later) Wicked returns to is other home, the Oriental Theatre.

Not to have any bias, but architecturally, the Oriental seems to have been built for Wicked, more so than any other theatre the show may play.

After ten years of continual play (this marks my 22nd time seeing the show), many lesser musicals would begin to show some wear and tear.  Not so with Wicked, which is adapted from the novel by Gregory Maquire with music and lyrics by Stephen Schwartz and a book by Winnie Holzman.  In fact the cast of this national tour, which skewers to the younger side, gives us performances that are always of the moment and and notwithstanding the fantasy element, ring very true.

Wicked is billed as the “untold story of the Witches of Oz”.  But it is so much more.  Wicked stands for the notion that what we are taught to be the truth, the black and white of a matter, is always scattered with matters of gray.  It is filled with life lessons for both young and old told with iconic characters that have been part of our social demographic for almost 80 years. 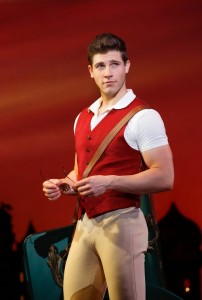 Alison Luff brings down the house as Elphaba, the phosphorescent academic whose tragic childhood leaves gives her a outlook on life that will end up changing way Oz is governed.  Ms. Luff is at all time connected with the piece which in turn makes her fellow actors all the more connected because of her performance.   Her first act closer, ‘Defying Gravity’, not only is a show stopper, but becomes almost menacing, which is the original intent of the song, and the first time I have seen it delivered as it was meant to be.

Jenn Gambatese’s Glinda, though a bit over the top sometimes, is a perfect foil/friend for Ms. Luff’s Elphaba.  The two have a great on stage chemistry where the friendship is real and never forced. Moreover, vocally, the duets these ladies have  blend beautifully together.   There was not a dry eye in the house after their parting song ‘For Good’.

The entire cast of this Wicked know how to sell a song, with many of cast as strong if not stronger then their current New York counterparts.  Curt Hansen gives us a much more rounded Fiyero then is actually penned; Emmy Award winner Kim Zimmer is again connected character wise more than most who have donned the wig prior.  In fact it is the first time I have seen a Madame Morrible as engaged during “Thank Goodness”.    Television (and stage) icon John Davidson, who I last saw on tour in State Fair, is a competent wizard, however, his vocals seemed a bit affected.

After recently attending a three day seminar with the composer and book writer, I spent much of this Wicked outing just listening.  It is there that I found the key to the show’s success.  It is at all times smart and never takes its audience for granted.  Mr. Schwartz’ music and lyrics are so spot-on that some songs are near perfection.  I’m not talking of the show stoppers.  Take for instance “I’m Not That Girl”, which for my money is best song in the show.  The music and lyrics become seamless in a song that both defines a character and a moment in the show.   There are many examples of this throughout Wicked, but this is a prime example (as is Popular).

With a film version on the horizon, Wicked is sure to be around in this current manifestation for another ten years, and maybe ten after that.  Like Phantom and Les Miz, Wicked transcends the mere four walls of a theatre and is able to penetrate the human soul.  That, as Glinda would proclaim, is GOOD.