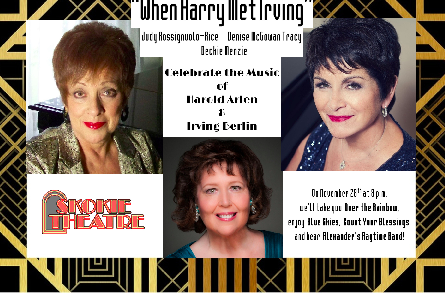 “WHEN HARRY MET IRVING” is a celebration of the music of Harold Arlen and Irving Berlin starring Judy Rossignuolo-Rice and Denise McGowan Tracy. With musical direction by BeckieMenzie, “WHEN HARRY MET IRVING” debuts at the Skokie Theatre, 7924 N. Lincoln Avenue,Skokie, IL on Friday, November 28, 2014 at 8:00PM.

A terrific entertainment option for the Thanksgiving holiday weekend, the cabaret concert, conceived by Rossignuolo-Rice, will feature music by two of the greatest contributors to the Great American Songbook, Harold Arlen and Irving Berlin appealing to audiences across several generations.

Of course Arlen’s compositions from The Wizard of Oz will be featured, but attendees will also enjoy renditions of his classics including “Get Happy,” “The Man That Got Away,” “Stormy Weather,” “Paper Moon,” and “One for My Baby (and One More for the Road).

With a treasure trove of over 1500 songs written by Irving Berlin, it will be nearly impossible to scratch the surface, but Judy, Denise and Beckie will delight the audience with favorites including, “God Bless America,” “Happy Holiday,” “Blue Skies,” “A Pretty Girl is Like a Melody,” “Alexander’s Ragtime Band,” and many more.

“I love the depth of the music of both of these men.  They tell wonderful stories and make us laugh, cry and remember,” says Rossignuolo-Rice about the production.  Rossignuolo-Rice has been a professional actor, director, acting coach and teacher for over 30 years.  Last year she entertained the Chicago Cabaret community with two sold-out performances of her one-woman show, They Shoot Sopranos, Don’t They?

Joining Judy onstage is Denise McGowan Tracy, known by the cabaret community as the popular co-host of Petterino’s Monday Night Live.  She is the recent recipient of the Chicago Cabaret Professionals Gold Coast Award for 2014.  McGowan Tracy has played a storied part in Chicago’s entertainment scene for over 30 years both onstage and behind the scenes as a producer and talent booker.

The always in-demand Beckie Menzie joins Judy and Denise on stage as performer as well as Musical Director for this production.  Menzie, an award-winning cabaret artist, has played venues from New York’s Lincoln Center to Chicago’s Symphony Center and co-hosts Petterino’s MondayNight Live with McGowan Tracy.

With, “WHEN HARRY MET IRVING” these three ladies of song and stage promise a trip down memory lane with a fresh new spin on these great songs and a few laughs along the way.

Tickets for the performance are $20.00 and can be purchased at by calling the theatre at 847.677.7761 or at www.skokietheatre.com.  A special group ticket price of $15.00 is available for groups of 10 or more.  Use the Code RAINBOW to receive the group ticket rate.