What in the world is a BAT HAMLET at Corn Productions 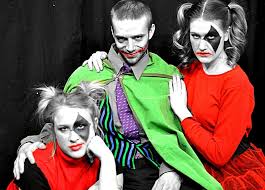 Last week I really wanted to see some comedy. So…as  young “20 something’s often do, I googled “Comedy in Chicago” and trusted whatever the internet tells me.

The first thing that came up was “Bat Hamlet” by the Cornservatory. As a pretty big batman nerd AND an individual who went to “fine arts college”(which equals reading hamlet SO many times…) I was excited.  Very excited. HOWEVER, even though the team at Cornservatory had their stuff really put together, I still ended up leaving the theater with very mixed feelings on the production. Bat Hamlet is a parody exploring the dark world of both Batman and Hamlet in a world all its own. We see the many thrilling parts of a classic batman series, with the inner turmoil of the classic Shakespeare character.

One of the biggest reasons I would recommend this play to someone is due to the set/general atmosphere of the theater. You enter a dark, gloomy theater with a stage that looms high over the audience. It’s so dark that you can barely read your program to judge each cast members bio properly. The entire essence of the theater got me excited and ready for this production. Set Designer Michael Brooks should  get a huge pat on the back and a possible raise? (You are welcome man..) As the show began I noticed something shiny through all of the darkness; The FIGHT CHOREOGRAPHY.  The creativity and fun that fight choreographer Orion Couling had with this show had me blurting out laughing AND stuck to the edge of my seat. Song Bird boy or “Robin” (played by Raymond Hui ) really showed off his athletic abilities through the battle sequences. A very fun throw back to  the old Robin gymnast character. The splits and double punch to the groin will never ever get old. Along with the costumes (Stephanie Palko) this shows technical attributes really pulled me into this world of Bat Hamlet.

Now on to the stuff that had me scratching my head a little bit. While I love the idea of Batman and Hamlet being squished together to make one dark brooding character, I would have liked the parody to be a little cleaner. The jokes many times weren’t about either Batman or Hamlet and just felt like a “bit” for “bit” sake.  Just on the edge of “overplayed” if that is possible in a Batman parody. It was in no way Director Kallie Noelle Rolison’s fault but the story just sometimes rambled on and I wanted more clever correlation between these two epic stories.  Possibly more throw backs to the classic Adam West Batman.  I absolutely loved the “Batman running with bomb over head” gag. I know the cleverness can be there.

The only character that really got a very well written and well thought out character was “Ophelia” (played by Kelly Schmidt ). She had a subtlety to her character that made her presence actually much bigger on that dark stage and when she finally lost her mind it cause a larger, more interesting contrast. A lot of the characters were stuck in between complete parody and realism. They just need to find a good balance or go full throttle with one.  Just have more fun. OH, and enunciation is kind of a big problem. The “stage whispering” was extremely hard to hear.  This inconsistency made a lot of the jokes fall flat and rely on the BYOB to get the extra laughs. I can tell they are better than that.

Even though it seems like I have been harsh I still say I would recommend this show.  Batman fans will love the show stylistically and the entire audience had a very fun time.  All of the actor delivered an energetic performance that got the audience hyped up and ready for a fun night It is well worth a watch. The battle scenes had the audience almost on its feet a few times and the woman sitting near me in the batman costume had the TIME OF HER LIFE.

“Bat Hamlet” at the Cornservatory runs June 20th to July 19th, Friday and Saturday evenings at 8 pm. No performance on July 4th.  You can reserve your 15 dollar tickets by calling 773.650.1331 or at www.cornservatory.org.