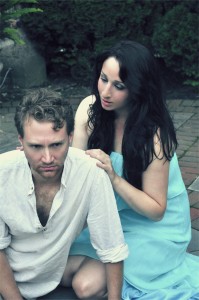 Big Noise Theatre Company is proud to open its 2012-13 season with the engaging rock-opera JESUS CHRIST SUPERSTAR, opening September 28th and playing weekends through October 21, 2012.  Performances will be held at Prairie Lakes Theatre in Des Plaines, IL.  The production is directed by Stacey Flaster, and Robert Deason returns to Big Noise as the show’s music director.

Based on a concept album project written by Andrew Lloyd Webber and Tim Rice, JESUS CHRIST SUPERSTAR tells the story of the final 7 days in the life of Jesus Christ through the troubled eyes of Judas
Iscariot.  The show is a musical theater staple, having just been revived on Broadway.

“We are thrilled to have Stacey direct for Big Noise,” said producer Marsha Rutenberg.  “Stacey has directed a number of our ‘Especially for Kids’ productions, and we are very happy to have someone with her critical acclaim and qualifications at the helm for such an important main stage production. ”

Jonathan Lee Cunningham (Jesus) returns to the Big Noise stage since playing Bobby Strong in Urinetown back in 2008.  Jonathan was last seen as Seymour in Theatre at the Center’s critically acclaimed production of Little Shop of Horrors.  He has appeared in 2 other productions of Jesus Christ Superstar, having played Simon for Winnetka Theatre in 2002, and Peter for Theatre at the Center in 2010.  Other shows include Baby, Fiddler on the Roof, Hello Dolly, Joseph, Do Black Patent Leather Shoes Really Reflect Up?, and Phantom at Theatre at the Center, John and Jen at Apple Tree Theatre, Something’s Afoot and You’re a Good Man, Charlie Brown at Drury Lane Oakbrook, Little Women at Marriott Theatre, and Tommy, I Sing! The Musical, and Merrily We Roll Along (Jeff Citation – Best Actor Nomination) with White Horse Theatre Company.  Mr. Cunningham is appearing through the courtesy of Actors Equity Association.

Big Noise will continue their season with the classic comedy Born Yesterday (January 18 – February 3, 2013) directed by Catherine Davis, and the musical Dirty Rotten Scoundrels (April 26 – May 12, 2013) directed and choreographed by Zachary L. Gray.

Tickets for Jesus Christ Superstar are $25 for adults and $23 for seniors/students, and can be ordered by calling 847-604-0275 or online at www.bignoise.org.

Big Noise Theatre Company, a division of Winnetka Theatre, celebrates their 11th anniversary of top-notch, live entertainment at the Prairie Lakes Theater in Des Plaines.  Big Noise strives to produce high-quality shows that stretch the creative talents of their actors and staff as well as surpass the expectations of their audience. Big Noise continues to be known for bringing downtown quality to the suburbs at reasonable rates