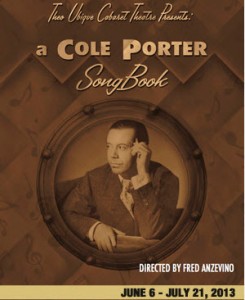 Audiences will have eight more opportunities to catch Theo Ubique Cabaret Theatre’s summer hit. The cabaret of over 30 songs by songwriter Cole Porter, which had already extended for six weeks beyond its initial eight-week run, will now be extended for two final weeks, closing on Sunday, September 15th.  Artistic Director Fred Anzevino announced the extension on Monday, August 12.

Performances during the two-week extension will be Thursdays at 7:30 pm, Fridays and Saturdays at 8 pm and Sundays at 7 pm. Tickets (which include dinner packages at some price levels) are $29 – $59.

The show has selling out the No Exit Cafe regularly since its June 6th opening to rapturous critical acclaim.

Performing this mix of Porter standards along with some less-frequently heard gems are Chris Logan, William Lucas, Sierra Naomi and Jill Sesso, accompanied by a three-piece band including Benham on the piano, Alan Trachtenberg on bass and Anthony Scandora on drums. The singers are decked out in styles of the 1940’s & 1950’s by costume designer Bill Morey on a set created by Adam Veness. Lighting design is by Michael Nardulli and the props design is by stage manager Paige Keedy.

A Cole Porter Songbook is Theo Ubique’s tenth cabaret-style revue exploring the work of specific songwriters for the theatre. It continues in a tradition that includes the company’s past reviews of Kurt Weill, Jacques Brel, Stephen Sondheim, Harold Arlen, Maltby and Shire, and Rodgers and Hammerstein –  in addition to last summer’s acclaimed Time After Time: The Songs of Jule Styne.

About Cole Porter: Born in Peru, Indiana in 1891, Porter became one of Broadway’s top songwriters of the 1920’s through  1950’s with his scores for musicals including Anything Goes, Kiss Me Kate and Can-Can. His songs were frequently performed and recorded by some of the nation’s most popular singers, like Ella Fitzgerald, Frank Sinatra and Rosemary Clooney. The show will include selections from such Porter hits as “I Get a Kick Out of You,” and “Too Darn Hot” as well as lesser known gems like “Let’s Misbehave,” and “Experiment.” He was one of the few Broadway songwriters of his era to write music as well as lyrics. His lyrics are known for their sexy double entendres and extensive vocabulary while his melodies range from romantic and lyrical to syncopated and jazzy.

A Cole Porter Songbook is performed at the No Exit Café, 6970 N Glenwood Avenue, Chicago, through September 15, 2013.

Dinner packages for A Cole Porter Songbook include the following menu options.