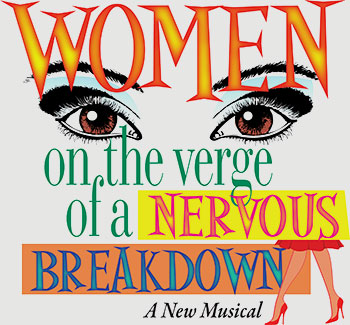 In its first professional production since its Broadway debut, the musical comedy WOMEN ON THE VERGE OF A NERVOUS BREAKDOWN makes its Chicago area premiere in a brand new production at Theatre at the Center, 1040 Ridge Road, Munster, September 11 through October 12, with a press opening on September 14.  With an irresistible Latin-infused score by Tony Award-nominated David Yazbek and book by Jeffrey Lane (the team behind past Theatre at the Center hit DIRTY ROTTEN SCOUNDRELS) WOMEN ON THE VERGE OF A NERVOUS BREAKDOWN is a touching and hilarious story of a group of women whose relationships with men lead to a whirlwind of emotions- love as they find them, confusion as they lose them and passion when they need them. This regional premiere is directed by William Pullinsi with Choreography by Danny Herman and Musical Direction and Orchestrations by William Underwood.

Set in 1980’s Madrid, WOMEN ON THE VERGE OF A NERVOUS BREAKDOWN introduces actress and singer Pepa (Jeff Award-Winner Cory Goodrich) who is heartbroken by her charming yet deceitful lover, Ivan (Jeff Award-Nominee Larry Adams). The plot thickens as his ex-wife of questionable sanity Lucia (Jeff Award-Winner Hollis Resnik) and their passionate and curious son Carlos (Jeff Award-nominee Nathan Gardner) show up. Chaos ensues when Pepa’s naïve best friend Candela (Jeff Award-Winner Summer Smart) falls in love with a possible terrorist and is wanted by the police. The show is comically narrated by a wise taxi driver (Jeff Award-nominee Bernie Yvon) who provides tissues, mints and advice to the colorful characters along the way.

Theatre at the Center’s production will be followed by the first London production when WOMEN ON THE VERGE OF A NERVOUS BREAKDOWN makes its West End premiere in January at the Playhouse Theatre. The original Broadway production featured well-known Broadway heavyweights including Tony Award-Winners Patti LuPone, Brian Stokes Mitchell and Laura Benanti.

In addition to Cory Goodrich as “Pepa” (Ring of Fire, The Music of Johnny Cash at Theatre at the Center; Ragtime at Drury Lane Oakbrook), Hollis Resnik as “Lucia” (National Tours of Sister Act., Les Misérables, Dirty Rotten Scoundrels and Thoroughly Modern Millie), Larry Adams as “Ivan” (The Phantom of the Opera on Broadway; La Cage aux Folles, 42nd Street, CATS, Phantom, A Christmas Carol at Theatre at the Center), Summer Naomi Smart as “Candela” (National tour ofWicked; The Beverly Hillbillies, The Musical at Theatre at the Center and Sweet Charity at Drury Lane Oakbrook), Bernie Yvon as “Taxi Driver” (Broadway and National tours of Ragtime; Hairspray, Joseph… at the Marriott Theatre and The Beverly Hillbillies, The Musical at Theatre at the Center) and Nathan Gardner as “Carlos” (Les Miserables at Drury Lane Oakbrook and Sweet Smell of Success with Kokandy Productions at Theatre Wit), the cast of WOMEN ON THE VERGE OF A NERVOUS BREAKDOWN includes Dina DiCostanzo as “Marisa,” Colette Todd as “Paulina,” Hillary Marren as “Anna,” David Schlumpf as “Ambite,” Jake Mahler as “Chief Inspector,” Scott Stratton as “The Detective,” Regina Webster as “Pepa’s concierge,” Missy Aguilar as “Ivan’s concierge,” Eric Lewis as “Malik,” Chris Carter as “Telephone Man,” Sheri Mocheit as “Young Lucia” and Ryan Naimy as “Young Ivan.”

Founded in 1991, the 400-seat Theatre at the Center is a year-round professional theater at its home, The Center for Visual and Performing Arts, 1040 Ridge Road, Munster, Indiana. Theatre at the Center is located off I-80/94, just 35 minutes from downtown Chicago, and has free parking. Performances are Wednesdays and Thursdays at 2 p.m.; Fridays and Saturdays at 8 p.m.; Sundays at 2:30 p.m.; and select Thursday evening and Saturday matinees. Individual ticket prices range from $40 – $44. To purchase individual tickets call the Box Office at 219.836.3255 or Tickets.com at 800.511.1552. Group discounts are available for groups of 11 or more and gift certificates are also available. For more information on Theatre at the Center, visit TheatreAtTheCenter.com.

Tagged with Theatre at the Center