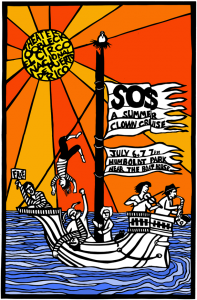 Funded by generous grants from the John D. and Catherine T. MacArthur Foundation’s International Connections Fund and the MAP Fund, Chicago-based Theater Oobleck has set sail on a two-year partnership with El Circo Nacional de Puerto Rico to create a new work focusing on the themes of emigration, exodus, and home.

This new work, set to premiere in 2015 in both San Juan and Chicago, will combine Oobleck’s new play development methodology and El Circo’s circus arts expertise. This cross-genre collaboration, a first for both Oobleck and El Circo, kicks off this July in Chicago, bringing together circus performers and musicians from Puerto Rico with Chicago-based actors and musicians for a week of intensive workshops of a script by Theater Oobleck founding member Dave Buchen and El Circo director Arturo Gaskins, culminating with two performances in Humboldt Park, the heart of Chicago’s Puerto Rican community.

SOS: A Summer Clown Cruise is set on a marooned cruise ship lost at sea, in which the circus troupe and the audience are all that remain on board. Survival skills mix with circus skills as the stranded performers juggle hope, despair, and juggling — for of course the show must go on. SOS is free and family friendly, featuring clowning, acrobatics, cantastoria, fire, a live band, and dialogue and music in both Spanish and English. Featured performers include Chicagoans Emmy Bean and Jay Torrence and, from San Juan, Arturo Gaskins, Briony Plant, Coco Drillo, and Angelle Guzmán Torres. The band includes Chicago musicians Ronnie Kuller, Julie Pomerleau, Chris Schoen, T-Roy Martin, and members of San Juan’s Banda Municipal de Makula-Barun.

Theater Oobleck is a 26-year-old collective dedicated to producing and performing original works of theater for the benefit of, and at low or no cost to, the people of Chicago, Illinois, and elsewhere. Oobleck’s artists are directly engaged with all aspects of the art-creation process, and directly engaged with the concerns of the community at large. Our works are written by members of the ensemble; developed by the group, working in concert to create a collective vision without an overseeing director; presented in open rehearsals, allowing audience input before the work’s premiere; and “free if you’re broke,” fostering an unmediated engagement between performer and audience.

El Circo Nacional de Puerto Rico is a populist circus founded in 2010 in San Juan, Puerto Rico. They have performed throughout the island in numerous settings including schools, festivals, hospitals, theaters, and the streets. This is their first show together out of Puerto Rico.

This program is presented as part of the Chicago Park District’s Night Out in the Parks with the support of Mayor Rahm Emanuel.  Arts programming in neighborhoods across the city advances the goals of the Chicago Park District and the Chicago Cultural Plan.  In its second year, the 2014 Night Out in the Parks series will bring 1,000 events and programs to more than 250 neighborhood parks throughout the city, making community parks safe havens and hubs of activity.  Projects will vary from traditional performances and concerts, to peace rallies, movies, magic shows, community workshops, nature based programs, dance pieces, festivals, and more. The Chicago Park District has partnered with more than 50 arts and community organizations to expand and produce this successful initiative.

Both SOS: A Summer Clown Cruise and the final production to be presented next year are supported by The John D. and Catherine T. MacArthur Foundation’s International Connections Fund, and by The MAP Fund, supported by the Doris Duke Charitable Foundation and the Andrew W. Mellon Foundation.

WHAT: SOS: A SUMMER CLOWN CRUISE

WHERE: HUMBOLDT PARK, EAST OF THE BOATHOUSE (1359 N. SACRAMENTO), RAIN OR SHINE. PARKING IS AVAILABLE. BYO BLANKET OR FOLDING CHAIR.