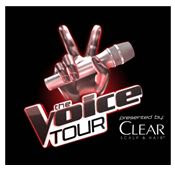 Fans of the hit NBC show, “The Voice”, can finally see their favorite contestants live as the season’s talented top Finalists and favorite past stars hit the road on a huge summer tour. Talpa Media and AEG Live announced today the 31-show concert tour launches June 21st in San Antonio, TX and stops in major cities including New York, Los Angeles, Chicago and Toronto, ON before wrapping in Redmond, WA on August 2. Tickets go on sale April 17 at 10:00 AMlocal via www.thevoice.com/tour and www.aeglive.com.

Already confirmed on the tour is Jamaica native and Season 5 champ, Tessanne Chin. Also joining the tour from Season 5 is soul-pop teen artist, and runner up, Jacquie Lee and vocal powerhouse and family man, Will Champlin. Dia Frampton, a Team Blake favorite, from Season One will be hitting the road too, along with this season’s Winner, Runner Up, and 3rd place. Another fan favorite is guaranteed to tour and will be determined in the month of May by America via social media.

Fans can experience the finalists performing favorite moments from their seasons again live on tour. THE VOICE Season 6 Finale will air on NBC on May 20th, but this season’s fan-favorites and past stars will continue on with the 2014 Tour.

CLEAR SCALP & HAIR™ will join NBC’s The Voice as the official title sponsor of The Voice Live Tour.  CLEAR SCALP & HAIR™ will bring the message of resilience across the U.S., and provide fans with exclusive behind-the-scenes access and content from the road. The multiplatform partnership will bring to life America’s inner and outer resilience, while engaging with the show’s thousands of fans in real-time.

For the latest tour and ticketing information please visit:

Talpa Media USA, the division of Talpa Media Group in North America, is based in Los Angeles and serves as producers of NBC shows “The Voice” and “The Winner Is”, Telemundo’s “La Voz Kids” and the recently announced upcoming FOX series “Utopia.” Talpa Media USA is also producing “The Voice Live Tour” which will kick off Summer 2014. Talpa Media USA is a division of Talpa Media Group,based in Holland, and is the holding firm that incorporates John de Mol’s media activities and serves as a development, production, and distribution company for formats developed for television and new media platforms. Talpa Content is the creative development unit for television and new media formats. Genres include unscripted/reality, entertainment, infotainment, factual, game shows, fiction, comedy, and feature films. Talpa International is dedicated to the worldwide licensing of Talpa’s formats and finished series. Talpa has its own music division—Talpa Music and Global Management and Talent Agency. For more information, visit www.talpa.tv

About The Clear Scalp and Hair Collection