The Unfortunates Is Powerfully Realistic

Aoise Stratford’s The Unfortunates is the story of one woman’s struggle through the violence and atrocities that women faced in 1800’s Victorian London. It shows us the plight of Mary Jane Kelly, the prostitute believed to be the final victim of Jack the Ripper. Kelly, played by Gail Rastorfer, recounts her life as one of the ‘unfortunate’ women, growing up poor and being forced into a life of prostitution. The story is told through a one-on-one conversation between Kelly and a stranger in the Bells Public House, where she reveals her life story of how she went from a housewife in a Welsh mining town to a desperate prostitute turning tricks in the London’s East End. Although opportunity from generous clients has taken her as far as Paris, presently she hasn’t even enough to pay rent.

The set is fantastically eerie, thick fog giving way to dark figures lurking in the shadows. One of those figures could very well be Jack the Ripper – the prostitute killing mutilator who shows no mercy for his victims. Artfully directed by Kurt Johns, the 85-minute play is evocative with this historical tale, offering a storehouse of information on how people and societies behaved in the seedy underbelly of London in 1888. 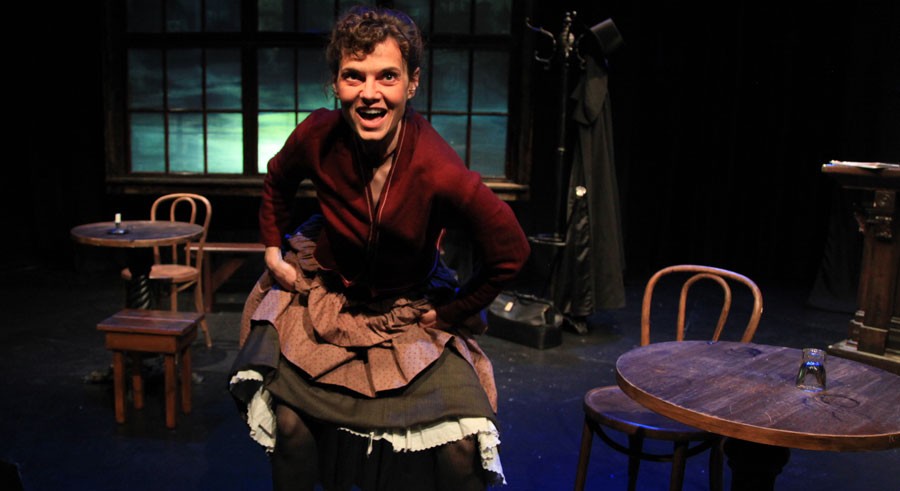 The beautiful projections that provide the sinister, outside window scenes are by Paul Deziels, and come to life through the lighting designs of Heather Skye. The simple yet stylish costumes designed by Alice Broughton, help bring out the authenticity of the character. The music and sound design by Eric Backus were fluid and ever-changing with the varied moods and moments of Mary Jane.

I highly recommend this powerfully realistic portrayal by perhaps the final victim to one of the most notorious and brutal murderers of the 19th Century.

The Unfortunates is playing now through July 10 at Theater Wit, 1229 W. Belmont. Performances are Wednesday-Sunday. For tickets call 773-975-8150 or visit https://www.theaterwit.org/tickets/productions/271/performances#top