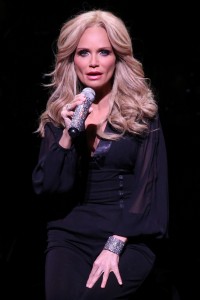 The Smith Center for the Performing Arts is thrilled to announce Tony® and Emmy® Award-winning sensation Kristin Chenoweth will perform a special New Year’s Eve concert inside Reynolds Hall beginning at 7:30 p.m.

The evening will feature Chenoweth performing an array of her most memorable songs and Broadway show tunes, including music from “Wicked,” “Promises, Promises” and “Glee.”  This unique night with the multitalented performer promises to take concert goers on a ride of laughter, heartbreak, thrills and great music.

“I am so delighted to celebrate the New Year with a performance at The Smith Center,” said Chenoweth. “What better place for a New Year’s Eve party than Las Vegas!”

Chenoweth has had an extraordinarily diverse career including her show-stealing, Tony-winning performance in “You’re A Good Man, Charlie Brown” and her triumphant star role when she originated the role of Glinda the Good Witch in “Wicked,” which earned her a leading actress Tony Award Nomination. The actress is also a New York Times Bestselling Author, has recorded four solo albums and continues to tour with her critically acclaimed concerts. She is currently filming “The Boy Next Door” with Jennifer Lopez.

Chenoweth’s critically acclaimed performance in the ABC series “Pushing Daisies” won her an Emmy Award for Best Supporting Actress in a Comedy Series.  Her guest appearance on Fox’s comedy “Glee,” earned her two Emmy Award nominations and a People’s Choice Award for Favorite TV Guest Star.  Kristin also starred as Annabeth Schott on the hit drama “The West Wing,” guest judged on “American Idol” and was featured on CBS’ “The Good Wife.”

About The Smith Center for the Performing Arts

The hallmark of downtown Las Vegas’ 61-acre urban development known as Symphony Park, The Smith Center for the Performing Arts is a public-private partnership that opened in March 2012. Heralded as the city’s Heart of the Arts®, The Smith Center is an architectural triumph and long-awaited cultural achievement that educates and entertains the citizens of Southern Nevada. The $470 million world-class performing arts center offers a blend of performances by resident companies, first-run touring attractions, lectures and internationally acclaimed performers in music, theater and dance. The five-acre campus features four performance spaces including the 2,050-seat Reynolds Hall, a 258-seat Cabaret Jazz club, the 250-seat Troesh Studio Theater and the 1.7-acre Donald W. Reynolds Symphony Park for outdoor concerts. Additionally, the campus is home to the Discovery Children’s Museum that opened in March 2013. For more information about The Smith Center for the Performing Arts, please visitwww.TheSmithCenter.com. Keep up with news and events on Facebook and follow The Smith Center on Twitter at @SmithCenterLV.