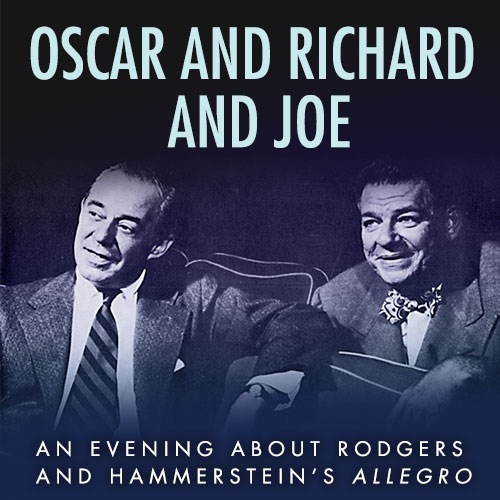 After the immense popularity of Oklahoma! and Carousel, legendary duo Rodgers & Hammerstein created a revolutionary new musical, Allegro. The show sharply divided critics, but Stephen Sondheim, who served as a production assistant on the original production for $25 a week, found much to admire. With music by Richard Rodgers, and book and lyrics by Oscar Hammerstein II, Allegro tells the story of Joseph Taylor, Jr., a young doctor who takes a lucrative hospital job in the big city of Chicago but finds himself longing for the simpler, more personal practice he left back home.

Conceived and directed by TMTC Founding Artistic Director Jessica Beth Redish and written by Scotty Arnold, OSCAR & RICHARD & JOE will explore the context of Allegro through theatrical footnotes on its history and legacy – and showcase key moments and songs from this rarely produced gem.

Richard Rodgers & Oscar Hammerstein, II (Book, Music and Lyrics, Allegro) After long and highly distinguished careers with other collaborators, Richard Rodgers (composer, 1902-79) and Oscar Hammerstein II (librettist/lyricist, 1895-1960) joined forces in 1943 to create the most consistently fruitful and successful partnership in the American musical theatre. OKLAHOMA!, he first Rodgers & Hammerstein musical, was also the first of a new genre, the musical play, blending Rodgers’ sophisticated style of musical comedy (which he had perfected in a twenty-five year partnership with lyricist Lorenz Hart) with Hammerstein’s innovations in operetta (conceived in collaboration with such composers as Sigmund Romberg, Vincent Youmans, Rudolf Friml and Jerome Kern.) OKLAHOMA! was followed by CAROUSEL (1945), ALLEGRO (1947), SOUTH PACIFIC (1949), THE KING AND I (1951), ME AND JULIET (1953), PIPE DREAM (1955), FLOWER DRUM SONG (1958) and THE SOUND OF MUSIC (1959). The team also wrote one movie musical, STATE FAIR (1945; adapted to the stage, 1995), and one for television, CINDERELLA (1957). Collectively, their musicals have garnered dozens of awards including: Pulitzer Prizes; Tonys, Oscars, Emmys and Grammys; and Drama Desk, Drama Critics’ Circle, Outer Critics’ Circle, Laurence Olivier and Evening Standard Awards.

Jessica Beth Redish (Conceiver/Director, Oscar & Richard & Joe) is the Founding Artistic Director of The Music Theatre Company where she directed and choreographed the company’s productions of PIPPIN (Joseph Jefferson Award Nomination – Choreography), Merrily We Roll Along (Joseph Jefferson Award Nomination – Midsize Musical), Erika’s Wall, The 9/11 Report, Saudade: dreams and longing and choreographed The Pajama Game and Mill Girls. Chicago area choreography credits include: Sweet Charity and She Loves Me (Writers Theatre), RENT  at American Theater Company/About Face Theatre (dir. David Cromer), Season on The Line at The House Theatre of Chicago and various productions for First Stage in Milwaukee. NY Credits include: Movement Direction for the Off-Broadway production of Adding Machine (dir. David Cromer) and choreography for The Act at 54 Below. Recent national television work includes choreography for the PBS Special featuring the a cappella group “Gentleman’s Rule.” As Founding Artistic Director of The Music Theatre Company, Jessica has commissioned works by a variety of authors, including Billy Corgan, Josh Schmidt, David Simpatico and Michael Mahler. Jessica is an alumna of Northwestern University and a member of the Society of Directors and Choreographers.

Sarah Larson (Ensemble) appeared as a dancer in Pretty Persephone by Billy Corgran in The 48-Hour Musicals: Encore! at The Music Theatre Company. Other Chicago credits include Patty Andrews in A Musical Tribute to the Andrews Sisters and The Mistress and Clara Understudy in Passion at Theo Ubique Cabaret Theatre. Favorite roles have included Marian Paroo in The Music Man and Karen Brown in Unnecessary Farce (Timber Lake Playhouse), Maria in The Sound of Music (Viterbo University) and Lula in Dutchman (Viterbo).

Chris Logan (Ensemble) was last seen at The Music Theatre Company in The Pajama Game, The 48-Hour Musicals: Autokorrekt, and working alongside Jessica Beth Redish as she developed Saudade: dreams and longing. Other credits include extensive work with Theo Ubique Cabaret Theatre, including A Kurt Weill Cabaret and Passion (Outstanding Musical, Non-Equity Jeff Award). He has also worked with The Marriott Theatre, The Paramount Theatre, BoHo Theatre and Bailiwick Chicago (upcoming). He is also currently music directing and choreographing Sherlock Holmes and The Case of the Christmas Goose (Raven Theatre) and will choreograph A Marvin Hamlisch Songbook (Theo Ubique Cabaret Theatre) next summer. He was named one of the “Hot New Faces of Chicago Theatre, Class of 2012” by Chris Jones of the Chicago Tribune.

Patrick Martin (Charlie & Others) is a Chicago-based actor and musician from Marietta, GA. Credits with The Music Theatre Company include: Merrily We Roll Along, Fugitive Songs In Concert, Lucky Stiff In Concert, and The 48 Hour Musicals: Encore! Other Chicago credits include: South Pacific (The Marriott Theatre), How to Succeed in Business Without Really Trying (Porchlight Music Theatre), and It’s A Wonderful Life: A Radio Play (American Theater Company). Regional credits include: The Drowsy Chaperone and Promises, Promises (STAGES St. Louis). As a musician, Patrick performs regularly in a variety of settings including frequent appearances with Bethany Thomas at The Green Mill and other venues. Patrick is a proud graduate of the BFA Musical Theatre Program at the University of Cincinnati College-Conservatory of Music.

Michael Weber (Richard Rodgers) created the role of Richard Clarke in The 9/11 Report, also conceived and directed by Jessica Beth Redish, at The Music Theatre Company. He was last seen on stage at Ravinia Festival where he was last seen as Charlie Davenport in Annie Get Your Gun and as Uncle Jocko/Mr. Goldstone in Gypsy (both starring Patti LuPone). Other acting credits include: The Sound of Music at Lyric Opera of Chicago, 42nd Street at The Paramount Theatre, Around the World in 80 Days at Cleveland Play House and The Winter’s Tale and Henry V at Chicago Shakespeare Theater. Michael is the Artistic Director of Porchlight Music Theatre where, most recently, he has directed Sweeney Todd, Bells Are Ringing and Pal Joey. The recipient of two Joseph Jefferson Awards, he has written and directed the past eight Joseph Jefferson Awards ceremonies. Michael is a Central Region Board Member of Actors’ Equity Association and proud to serve as a pledge host on PBS station WTTW.

The Music Theatre Company explores the musical in the interest of expanding the canon of musical theatre through fully-staged productions, commissions of new works and musical experiments.  For additional information, visit www.themusictheatrecompany.org.