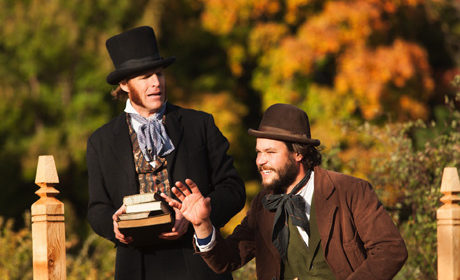 The Morton Arboretum’s beautiful woodlands and tree-lined clearings set the scene for the acclaimed outdoor walking play, Nature. Playing select days July 8-31, this unique theatrical event about the lives of Ralph Waldo Emerson and Henry David Thoreau is an experience like no other—as an award-winning ensemble of actors and musicians bring audiences into a playful and deeply-moving journey through their natural environment. Nature, presented by TigerLion Arts, is filled with music, song, story and celebration with scenes unfolding around audience members as they follow the ensemble through the grounds.

Heralded by the Minneapolis Star Tribune as “Best in Twin Cities Theater,”Nature is a vibrant look into the 19th century world of Emerson and Thoreau, renowned writers, friends and nature advocates.  Created and performed by Tyson Forbes, a direct descendant of Emerson, Nature shines a spotlight on the relationship between the prominent essayist and the philosopher and naturalist best known for his memoir “Walden,” in which he chronicles a simple and solitary life in the woods. The play will explore a rift that ended their close friendship and a shared belief that nature is a source of spiritual respite and renewal.

The story is an original work collaboratively created and performed by Forbes and directed by Markell Kiefer.

“I have always felt honored to be an Emerson descendent,” Forbes said. “I feel an intimate responsibility to his lineage, and for years I have imagined a play that could bring his spirit and teachings, along with that of his friend and fellow author Henry David Thoreau, to a broader audience. When I read their work, I find answers to burning questions on how to live my life more deeply and responsibly in this world. They were both radicals of their time, calling on their peers to think for themselves and be agents of change. I believe their words and ideas are as necessary now as they were then.”

“We’re thrilled to welcome Nature to the Chicago area for the first time,” said Jenelle Hardtke, manager of special events at The Morton Arboretum. “From the memorable performances to the costumes, music and imaginative use of props and scenery, this unique play is sure to leave a long-lasting impression on all who see it.”

Nature opens Friday, July 8 and will play Thursdays through Sundays through July 31. Running time is 90 minutes, without intermission. Tickets ($25-$35) are on sale now at mortonarb.org/natureplay, by phone at 630-725-2066 or at the Visitor Center. During the performance, the audience will walk short distances between four different locations. Portable lawn chairs or blankets to sit on are suggested, as there are a limited number of chairs for those who need them most. Guests should dress for the weather and wear comfortable shoes. Audience members can enjoy pre-show bagpipe music performed by a world renowned piper and choral arrangements from local community members 30 minutes before the performance begins.

Nature Workshops
Connect with the outdoors through the theater with the cast of Nature. Professional actors will connect your family to nature through walks, theatrical play, and reflective journaling.  Each workshop attendee will receive a Nature field journal to take home. $16 members, $19 nonmembers.
Family Workshops:  July 12, July 23
Adult Workshops:  July 26, July 30

About TigerLion Arts
TigerLion Arts, founded and led by Markell Kiefer and Tyson Forbes, is a Minneapolis-based production company with a mission to celebrate human wisdom and the spirit of nature through creative works that awaken, inform, and delight. Since 2009, TigerLion Arts has touched thousands nationwide with four original productions: The Buddha Prince (2009), a walking play about the life of the Dalai Lama performed in New York City’s Central Park; Nature (2010 production); KIPO! (2011), a circus of spirit, song and dance from Tibet, which was the official arts component of the Dalai Lama’s 2011 Minnesota visit, and The Dragons are Singing Tonight (2012), a musical based on the book of children’s poetry by Jack Prelutsky, created in collaboration with Circus Juventas and Minnesota Boychoir. Learn more at tigerlion.org.