The Hypocrites Present The World Premiere Adaptation of Gilbert and Sullivan’s H.M.S. PINAFORE In Repertory with MIKADO & PIRATES OF PENZANCE Feb. 7, 2015 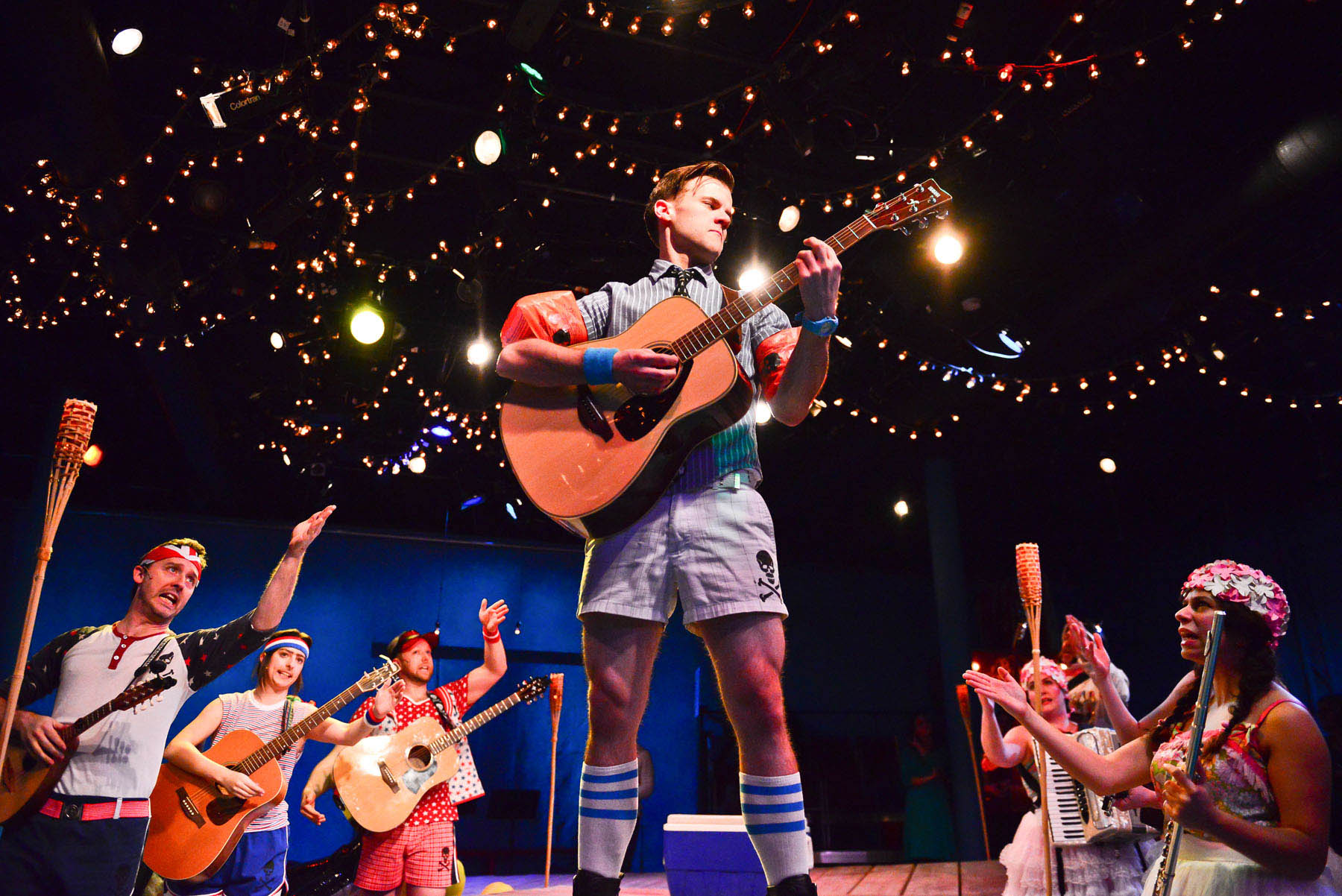 (pictured) Doug Pawlik (center) and the cast of The Hypocrites’ production of Gilbert and Sullivan’s THE PIRATES OF PENZANCE, adapted and directed by Sean Graney. Photo by Evan Hanover.

On the heels of their critically acclaimed hit ALL OUR TRAGIC, The Hypocrites are pleased to continue their 2014-15 Season with another world premiere: a playful re-imaging of Gilbert and Sullivan’s comic opera H.M.S. PINAFORE, adapted and directed by Founding Artistic Director Sean Graney, co-directed by Thrisa Hodits with new arrangements by Matt Kahler* and Andra Velis Simon.  In what has become an annual celebration of the Gilbert and Sullivan canon, H.M.S. PINAFORE will run in repertory with remounts of the company’s wildly popular productions of THE MIKADO and THE PIRATES OF PENZANCE, also adapted and directed by Graney. All three promenade-style productions will be helmed by ten creatively cast performers acting as their own orchestra, with music direction by Andra Velis Simon.

The Hypocrites’ repertory of three Gilbert and Sullivan favorites, the perfect non-denominational holiday offering, will play November 26, 2014 – February 7, 2015 at their new home, The Den Theatre, 1329-1333 N. Milwaukee Ave. in Chicago. Ticket for all three productions are currently on sale at www.the-hypocrites.com.  The press opening for H.M.S. PINAFORE is Monday, December 1 at 8 pm.

THE PIRATES OF PENZANCE

Curtain Times (for regular run): Fridays at 8 pm; Saturdays at 3 pm and 8 pm; Sundays at 3 pm and 8 pm; and Mondays at 8 pm. For a detailed schedule of individual performances, please visit www.the-hypocrites.com. Please note: there will be a marathon of all three productions on Saturday, February 7 at 11 am (H.M.S PINAFORE), 3 pm (THE MIKADO) and 8 pm (THE PIRATES OF PENZANCE).

Tickets Prices: $36 – $50. Tickets are currently on sale at www.the-hypocrites.com.

THE MIKADO has also been invited to appear in the American Repertory Theater’s (A.R.T.) 2014-15 Season at Harvard University. The Hypocrites’ 2010 production of THE PIRATES OF PENZANCE earned four Jeff nominations including Best Musical and Best Ensemble – and it’s remained an audience favorite ever since.

About the Adapter/Director
Sean Graney has directed over 30 productions for The Hypocrites since 1997. He recently returned from a Fellowship at the Radcliffe Institute for Advanced Study at Harvard University. In 2004, Graney was a participant in the NEA/TCG Career Development Program for Directors. He has won four Joseph Jefferson Citation awards for the Direction and Adaptation for Sophocles: Seven Sicknesses, and Directing of Equus and Machinal. He has directed Edward II (Chicago Shakespeare Theater), The Hairy Ape (Eugene O’Neill Festival at Goodman Theatre), The Comedy of Errors, The Mystery of Irma Vep and What the Butler Saw (Court Theatre), Yankee Tavern (Milwaukee Rep) and The Elephant Man (Steppenwolf for Young Audiences).

Founding Artistic Director Sean Graney* created The Hypocrites in 1997. It is currently run by Artistic Director Halena Kays* and Managing Director Megan Wildebour*. The Hypocrites are recognized as groundbreakers that defy the audience’s expectations. The company has grown significantly in the past few years, receiving acclaim for productions at the Steppenwolf Garage, Goodman Theatre, Museum of Contemporary Art, DCASE Storefront and Chopin Theater. The company’s smash-hit production of Our Town, directed by David Cromer, transferred in 2009 to Off-Broadway, Los Angeles and Boston. The Pirates of Penzance has appeared at Actors Theater of Louisville and American Repertory Theater (A.R.T.). A.R.T. has also brought Romeo Juliet, 12 Nights and The Mikado (forthcoming). The American Theatre Wing, best known as the creator of the Tony Awards, presented The Hypocrites with one of the 2013 National Theatre Company awards in 2013. For more information, please visit www.the-hypocrites.com.