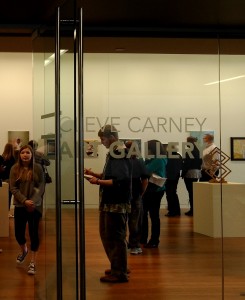 The Cleve Carney Art Gallery hosts a unique exhibit of Vivian Maier’s work entitled “Vivian Maier:Exposed” at the McAninch Arts Center, 425 Fawell Blvd., Glen Ellyn, Ill., June 17 – Aug. 16. The opening preview reception will be Tuesday, June 17 from 6 – 8 p.m. and will include a meet and greet with members of “Team Vivian,” a College of DuPage (COD) team including vintage film processor, Fran k Jackowiak, and several film and photography students, who processed Maier’s film. The reception and exhibition is free and open to the public. The gallery will also host special related events including “An Afternoon with Vivian Maier” film screening/panel discussion/book signing event on Sunday, July 27 from 1 until 4 p.m. Tickets are required for this event. For more about the exhibition or related events, visit cod.edu/gallery or call 630.942.3206.

Born in New York City in 1926, Vivian Maier spent her childhood in France before returning to New York in the late 1930’s. Later, Maier moved to Chicago and worked as a nanny for nearly 40 years, a livelihood that supported her and her passion for photography. Maier produced more than 100,000 negatives during her life, but showed them to very few people. Her work remained unknown until its discovery in 2007, only a year after her death. Since then, Maier’s photos have ignited passion and enthusiasm in photography buffs and art enthusiasts alike worldwide.

Jeffrey Goldstein is one of the three original owners of what is known to exist of Vivian’s work. Goldstein needed to develop 275 rolls of Maier’s photographs and, with the help of friends, found Frank Jackowiak, a COD faculty member at the time and co-curator of the Cleve Carney Art Gallery’s  “Vivian Maier:Exposed” exhibition.

Jackowiak developed the film over one weekend alongside a small team of COD students. Members of this group, known as “Team Vivian,” will share their story and lead the tour of the exhibit and of COD’s photography facilities during the June 17 opening reception. “We didn’t have any film that was ruined,” Jackowiak says, an impressive feat given its age. “I don’t think I’ll have the same experience ever again. The perk was that [whoever developed the film] was the first person on the planet that got to see those images.”

Champions of Maier’s photography have been organizing exhibitions and events nationally and internationally since the discovery of her work. The “Vivian Maier:Exposed” exhibition at the Cleve Carney Art Gallery will be unique in its showcasing of both silver gelatin prints and

digitally-produced prints of Maier’s photographs side-by-side, facilitating an opportunity for

discussion. All the photographs and artifacts in the exhibit are on loan from the Jeffrey Goldstein Collection, Vivian Maier Prints, Inc.

In addition to the exhibition, the Cleve Carney Art Gallery will host “An Afternoon with Vivian Maier” film screening/panel discussion/book signing event on Sunday, July 27. This ticketed event will begin at 1 p.m. with a screening of the documentary film “The Vivian Maier Mystery” followed at 2 p.m. with a panel discussion and Q&A session with Goldstein, Jackowiak, vintage film processor. Ron Gordon and Sandy Steinbrecher, master printers. A gallery walk-through and book signing by Richard Cahan and Michael Williams, authors of “Vivian Maier: Out of the Shadows” will round out the afternoon. For tickets and more information visit cod.edu/gallery or call 630.942.3206.

The late Cleve Carney provided a significant legacy gift to establish the Cleve Carney Art Gallery, a one-story, 1,850-square-foot addition on the west side of the McAninch Arts Center. The gallery opened in February 2014 with its inaugural exhibition “Selections from Cleve Carney’s Art Collection” and offers year-round visual art exhibitions showcasing a variety of innovative art by regional, national and international artists. In conjunction with the Cleve Carney legacy gift, the College of DuPage Foundation has launched a three-year endowmentcampaign to ensure Carney’s generous gift is fully realized. For more information visit cod.edu/foundation

The Cleve Carney Art Gallery at the McAninch Arts Center, 425 Fawell Blvd., Glen Ellyn, Ill. hosts “Vivian Maier: Exposed,” June 17 through Aug. 16. Opening preview is Tuesday, June 17 from 6 to 8 p.m. and includes a guided tour. The exhibition is free and open to the public. Following the opening, the exhibition can be viewed during regular gallery hours Monday through Thursday from 11 a.m. to 3 p.m.; Thursday from 6 to 8 p.m.; and Saturday from 11 a.m. to 3 p.m. The gallery is usually open beginning one hour prior to MAC performances and during intermission. The gallery will also host a ticketed event “An Afternoon with Vivian Maier” film screening/panel discussion/book signing event on Sunday, July 27 from 1 to 4 p.m. For more information about the exhibition and related special events, visit cod.edu/gallery or call 630.942.3206.

The McAninch Arts Center (MAC),on the campus of College of DuPage, 425 Fawell Blvd., Glen Ellyn, Ill., is located 25 miles west of Chicago near I-88 and I-355 and houses three performance spaces (the 800-seat proscenium Belushi Performance Hall, the 184-seat soft-thrust Playhouse Theatre and the versatile 70-seat black box Studio Theatre), plus the Cleve Carney Art Gallery, classrooms for the College’s academic programming and the 1,200 capacity outdoor Lakeside Pavilion. This unique facility has presented theater, music, dance and visual art to more than 1.5 million people since opening in 1986 and typically welcomes more than 75,000 patrons annually from the greater Chicago area.

The MAC began major renovations in fall 2012 to update its three performance spaces, construct a new art gallery and outdoor lakeside pavilion and make improvements to the infrastructure, teaching and learning spaces and patron service areas. These renovations were funded as part of the $168 million referendum that voters of District 502 passed in November 2010.The MAC completed the $35 million renovation in December 2013 and officially opened its doors to the public on March 8, 2014. For more information about the MAC, visit AtTheMAC.org. You can also learn more about the MAC on Facebook at facebook.com/AtTheMAC  or on twitter at twitter.com/AtTheMAC.