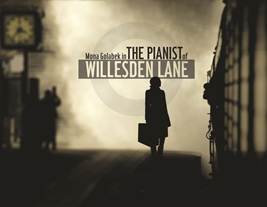 Eighty-Eight Entertainment follows its current presentation of Hershey Felder’s AN AMERICAN STORY, now through April 14th at Chicago’s Royal George Theatre, with the Chicago Premiere of THE PIANIST OF WILLESDEN LANE, starring internationally-acclaimed storyteller and pianist, Mona Golabek, in a limited engagement at The Royal George Theatre, 1641 North Halsted Street .  The production is adapted and directed by Hershey Felder and based on the book The Children of Willesden Lane by Golabek and Lee Cohen.  The Chicago premiere follows successful productions in Los Angeles and Boston.

Set in Vienna in 1938 and in London during the Blitzkrieg, THE PIANIST OF WILLESDEN LANEtells the true story of Mona Golabek’s mother, noted pianist and author Lisa Jura. A young Jewish pianist, Lisa dreams of a concert debut at the storied Musikverein concert hall. When Lisa is sent on the kinder transport to London to protect her from the Nazi regime, everything about her life is upended except her love of music and her pursuit of her dream. Golabek performs some of the world’s most beloved piano music in this poignant true story of her mother’s experience in wartime Europe. Adapted and directed by local favorite Hershey Felder, THE PIANIST OF WILLESDEN LANE is a riveting tale of hope that is a powerful testament to how music helps us survive through our darkest times.

“This beautiful tale told by Mona Golabek herself is performed in the style of musical storytelling that Chicago audiences have come to know from me,” said adapter/director Hershey Felder, creator and performer of audience favorites including George Gershwin Alone and Maestro: Leonard Bernstein.  “Being able to work with her to present this piece has been an incredible joy both because her skill as a musician enables the evening to showcase some of the world’s most beautiful and enduring piano music ever composed, and also because no one else could tell this story the way she can.”

American concert pianist Mona Golabek has appeared at the Hollywood Bowl, the Kennedy Center and the Royal Festival Hall alongside major orchestras worldwide. A Grammy nominee, she has been the recipient of numerous awards including the Avery Fisher Prize, and has been the subject of several PBS television documentaries. Golabek is the creator and voice of The Romantic Hours, a syndicated radio program which combines classical music with readings of poetry, letters, and stories, and can be heard on 80 stations and XM Satellite Radio. Golabek and her family are founders of the non-profit Hold On To Your Music, which spreads the message of the power of the arts, especially music, to embolden the human spirit. In addition, Golabek and Lee Cohen are award-winning authors of The Children of Willesden Lane, the book upon which THE PIANIST OF WILLESDEN LANE is based.

The performance schedule for THE PIANIST OF WILLESDEN LANE is Friday, April 19th through Sunday, May 12th.  Performance times are: Wednesdays & Thursdays at 7:30 p.m., Fridays at 8 p.m.  Saturdays at 2 p.m & 8 p.m. and Sundays at 3 p.m.  Tickets are $44 on Wednesdays and Thursdays, and $49 on Fridays, Saturdays and Sundays. Tickets are now on sale at The Royal George Theatre and may be purchased by calling 312.988.9000. Box office hours are 10 a.m. – 6 p.m. Tuesday through Saturday. Tickets may also be purchased online at www.theroyalgeorgetheatre.com.