THE BOULEVARD FESTIVAL returns to Logan Square in 2014 on August 22, 23, 24 and will feature the Dean Ween Group, Greensky Bluegrass and Many More! 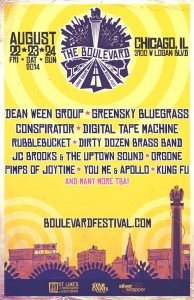 Silver Wrapper & Star Events are proud to announce the third annual Boulevard Festival, taking place August 22 through 24, 2014 at 3100 W. Logan Blvd. in Logan Square. There will be two stages of rock, bluegrass, funk and live band electronic music brought to you by Chicago’s favorite independent promoters, Silver Wrapper! The 2014 lineup will feature:

Join fest-goers and experience the city’s most eclectic and engaging street festivals. Attendees, be prepared to indulge in a carefully selected array of craft beers that typically aren’t available at a street festival from some of the best breweries around! And after tasting some of the best brews around, Logan Square’s top restaurants, cafes, bakeries and bistros will be waiting to satisfy your hunger with delicious cuisine that will have you coming back for more. You’ve been warned- this event will blow your taste buds’ minds!

This festival, produced by Star Events, benefits the mission and outreach of St. Luke’s Lutheran Church of Logan Square, an active community member for over 100 years.

For the third year in a row, Chicago-based independent jam, indie, and dance music promoters Silver Wrapper return to curate all the stages. Silver Wrapper co-produces North Coast Music Festival, Taste of Randolph Festival, Chicago Bluegrass and Blues Festival, and hundreds of events throughout the year around Chicago.