THE BOOK OF MORMON Is A Faith Healer

After seeing one of the last previews of the Broadway production of The Book of Mormon you felt that musical theatre history was being made. With the opening of the Chicago production last night at the Bank of America Theatre, the same is true. Few shows have had the impact on the genre as The Book of Mormon, not only from a brilliant marketing strategy, but as a financial beacon that most other theater works can only wish for.

The Book of Mormon is the brainchild of South Park creators Trey Parker and Matt Stone who have long had a fascination with the hypocrisy of all organized religion. In fact one of the most popular episodes of South Park involves the musicalized origin of Mormonism underscored by a chorus singing “dumb-dumb-dumb”. Mr. Parker grew up performing in and accompanying musicals which he was doing when he met his best friend Mr. Stone at high school in Colorado (where South Park is based). It is when Parker and Stone saw Avenue Q and met with the shows creators Jeff Marx and Robert Lopez that the idea of The Book of Mormon came to fruition. As every musical has its growing pains in its evolution, Book of Mormon was no exception. After seven years in the development the process and the eventual exiting of Mr. Marx, workshops began, which included our friend Cheyenne Jackson as Elder Price. The boys decided to go all in and instead of having tryouts, went directly into previews on Broadway and was an instant hit.

The Book of Mormon follows Elder Kevin Price who is about to embark on his two year mission to “recruit” souls to the church. Though it is his dream to do his required duty in the miraculous city of Orlando, Elder Price is instead paired with misfit Elder Arnold Cunningham and shipped to Uganda where the tribe is faced with AIDS, clitoral mutilation, baby rape and a very angry warlord. Through inspired production numbers, creative choreography and characters that you instantly feel an affection for, the musical takes off like a freight train and never slows down. As in their South Park episodes, The Book of Mormon points out the ridiculousness of the religious institution itself, but never once questions the authenticity of the boys who believe in the faith. It is in that basic idea of belief in the potential greatness of people and not organizations, that The Book of Mormon finds its underlying success. 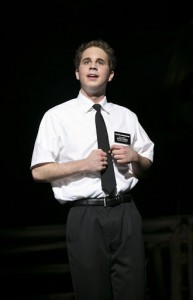 For the Chicago run, directors Casey Nicholaw (who is also the choreographer) and Trey Parker have brought a mix of “Mormon” veterans and new recruits. As Elder Price, the sensational Nic Rouleau comes directly from the Broadway production. Rouleau has moves through the role with ease and has great comic chemistry his co-star, Ben Platt. Platt’s Elder Cunningham steals every scene he is in. A svelte Platt has a much different take on his lonely character than is usually played and which was originally created by Josh Gad. Mr. Platt also has a phenomenal tenor voice that he gets to let loose on a few occasions. American Idol alum Syesha Mercado, who just arrived last week, is heavenly as Nabulungi and possesses a sultry alto voice that can shake the roof off the theatre; while Steppenwolf stalwart James Vincent Meredith get to show his vocall and comic chops as Mercado’s father.

Musically, The Book of Mormon is on par with some of the greatest scores of all time (although I suggest you hum the tunes in public rather than sing the lyrics out loud). Modern as “Mormon” is, it is also a throwback to the musicals of the 1950’s and early 60’s with an opening number (“Hello”) reminiscent of the Telephone Song in Bye Bye Birdie, and odes to classic and modern shows such as The Music Man, Wicked, Joseph & The Amazing Technicolor Dreamcoat, Little Shop of Horrors, Once on this Island, The Lion King and a hilarious send up of “Uncle Toms Cabin” from The King & I.

What Parker and Stone’s projects are known for (as well as Lopez with Avenue Q), beyond the shock value of the dialogue, is the bigger moral lesson in their work. The Book of Mormon ultimately is about the simple notion of believing in the innate good of humanity rather than relying on institutions to define us. Whether you are gay, straight, agnostic or devotedly religious, it is the belief that the individual can make mankind a better place; and inside all the humor and satire of The Book of Mormon, that basic truth shines through.

As a side note; I would highly recommend that frogs not enter the theater.

The Book of Mormon is playing at the Bank of America Theatre, 18 W. Monroe St., Chicago. Tickets are available at all Broadway In Chicago Box Offices (24 W. Randolph St., 151 W. Randolph St., 18 W. Monroe St. and 175 E. Chestnut), the Broadway In Chicago Ticket Kiosk at Water Tower Place (845 N. Michigan Ave.), the Broadway In Chicago Ticket Line at (800) 775?2000, all Ticketmaster retail locations (including Hot Tix and select Carson Pirie Scott, Coconuts and fye stores), and online at www.BroadwayInChicago.com. Prices range from $45 – $115. A select number of premium seats are also available. Groups of 15 or more can call (312) 977-1710 to purchase tickets. In addition, there are 20 tickets held for each performance that will be sold through a drawing two and a half hours prior to each performance. For calendar information please visit www.theatreinchicago.com