Ghostlight Records will release the original cast recording of the musical The Apprenticeship of Duddy Kravitz online and in stores on Friday, December 2, 2016. The album is now available for digital pre-order. Featuring music by Alan Menken (Oscar and Tony Award-winning composer of Beauty and The Beast, The Little Mermaid,Little Shop of Horrors, and currently represented on Broadway with Aladdin and the new musical A Bronx Tale) and book and lyrics by award-winning lyricist-librettist David Spencer (best known as lyricist co-librettist of Weird Romance and author of the industry standard book, The Musical Theatre Writer’s Survival Guide), this new musical adaptation of Mordecai Richler’s beloved tale is both uproarious and moving. The 36 page, full-color booklet includes complete lyrics, production photography, notes about the production and its history by award-winning author and journalist Sean Silcoff (who had covered the production extensively for Canada’s premiere national newspaper, The Globe and Mail), and a spirited, full synopsis by the show’s narrator and co-star character, Max (“I’m the father”) Kravitz. The album is produced by Rick Kunis, Alan Menken, David Spencer and musical director Jonathan Monro, To pre-order, please visit sh-k-boom.com/duddykravitz.

Based on the literary classic – which also inspired the 1974 film directed by Ted Kotcheff, starring Richard Dreyfuss, Micheline Lanctôt, Jack Warden and Randy Quaid – The Apprenticeship of Duddy Kravitz is set on the streets of 1950s Montreal and the countryside of St. Agathe. Ambitious, spiky, relentlessly driven, Duddy Kravitz is on the cusp of adulthood and hustling to climb the social ladder. Obsessed with his grandfather’s maxim, “A man without land is nobody,” and desperate to prove himself, he risks making his name at the expense of those he loves; it all comes down to choosing what kind of man he’s going to be. 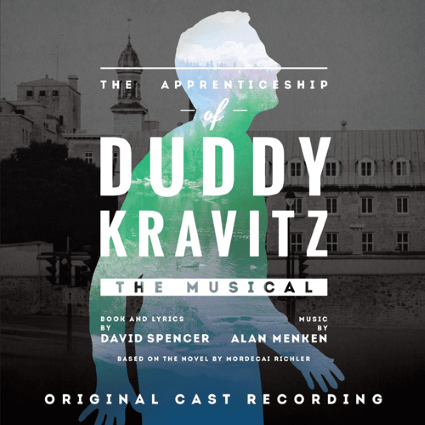 The recording of The Apprenticeship of Duddy Kravitz preserves the invigorating musical energy of the 2016 World Premiere, Canadian production at the Segal Centre for Performing Arts, Montreal, Québec, that was directed by Austin Pendleton, the Tony Award-nominated actor and director. The Montreal Gazette raved “there’s much to enjoy in this audaciously unorthodox musical.”The Metropolitan called it “a fearless, reimagined version of Richler’s classic novel.” The Montreal Times added “the show boasts a number of songs, running from poignant and romantic to comic, that will leave you humming.” And renowned American theatre journalist Peter Filichia rated the show a “masterpiece,” placing it alongside Hamilton as “the other best musical of 2015.”

Spencer and Menken had taken a previous crack at Duddy Kravitz for an entirely different musical adaptation, with book by another writer, that played in Philadelphia in 1987. Though the results were mixed, the songwriters were too invested in the story, and the work it inspired in them, to let go, and decided to reboot their efforts. Spencer took on the librettist’s role, crafting a new adaptation from scratch; about 3Ž4 of the Philly score was replaced (and the rest revised), and after a long developmental history, the all-new approach debuted at the Segal Centre to become a rave-reviewed, sold-out hit, twice extended.  (Composer Menken and lyricist-librettist Spencer had previously collaborated on the Off Broadway cult favorite science fiction musical, Weird Romance.)

Alan Menken is also represented on Ghostlight Records with the cast recordings of Newsies, Sister Act, The Hunchback of Notre Dame and Leap of Faith. The label served as executive producer for Aladdin.

ALAN MENKEN’s music and lyrics have become an integral part of the fabric of our lives since his first works were produced nearly 40 years ago. His stage musicals include Little Shop of Horrors, Beauty and the Beast, The Little Mermaid, Newsies and Aladdin. Song and score credits for film musicals includeThe Little Mermaid, Beauty and The Beast, Newsies, Aladdin, Pocahontas, The Hunchback of Notre Dame, Hercules, Enchanted, Tangled and Sausage Party. His chart topping songs have included “Beauty and the Beast,” “A Whole New World,” “Colors of the Wind” and “Go the Distance.” Winner of the 2012 Tony and Drama Desk awards for his score for Newsies, he has won more Academy Awards than any other living individual, including eight Oscars® with 4 for Best Score and 4 for Best Song; 11 Grammy® Awards (including Song of the Year for “A Whole New World”); 7 Golden Globes; London’s Evening Standard Award; the Olivier Award; the Outer Critics Circle Award and the Drama Desk Award. Other notable achievements include induction into the Songwriters Hall of Fame, Billboard’s number one single (“A Whole New World”) and number one album (Pocahontas). In 2001 he received the distinction of being named a Disney Legend. In 2010 he received a star on the Hollywood Walk of Fame. Alan’s upcoming works include a live-action film adaptation of Beauty and the Beastand an as-yet-untitled film musical project at Universal Pictures.

DAVID SPENCER is an award-winning composer-lyricist, lyricist-librettist, author and musical theatre teacher. He has written music and lyrics for the Richard Rodgers Development Award-winning musical The Fabulist, which also contributed to his winning a Kleban lyrics award and several Gilman & Gonzalez-Falla Theatre Foundation grants. He is also lyricist-librettist for two musicals with composer Alan Menken: Weird Romance (WPA 1992, York 2004) and The Apprenticeship of Duddy Kravitz, which had its sold out, extended world premiere in Montreal in Summer 2015; additional productions, in the US and Canada, are actively in the works. Spencer made his professional debut in 1984 with the English Adaptation of La Bohéme at the Public Theatre; and he has since written music and lyrics for Theatreworks/USA’s all-new, award-winning Young Audience versions of The Phantom of the Opera (1996) and Les Misérables (1999) (book and direction for both by Rob Barron). Currently he is writing book, music and lyrics for a musical based on the iconic Russian novel The Golden Calf. Spencer’s published books are the Alien Nation novel Passing Fancy (Pocket, 1994), The Musical Theatre Writer’s Survival Guide (Heinemann, 2005, an industry standard that has remained in print since its publication), and the script of Weird Romance (Samuel French, 1993). He is on the steering committee and teaching faculty of the BMI-Lehman Engel Musical Theatre Workshop.