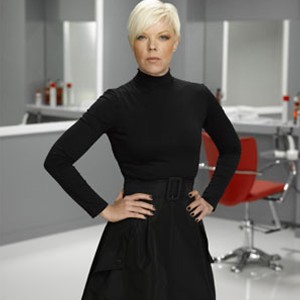 Bravo’s hit television show ‘Tabatha Takesover’ has become one of Bravo’s must see hits.  Host and hair guru Tabatha Coffey talks about the evolution of the tv show and her new charity venture.

MR: (Michael Roberts) First Tabatha, I want to know how a nice Aussie girl like you ended up opening your own salon in New Jersey?

TC: [laughing] Well, it was a long journey Michael.

Basically, I had family in New Jersey so when I decided to move first from Australia, New Jersey is where I landed.

MR: How did you get involved with the hair industry?

TC: Both my mother and brother were hair stylists, so it was something I was brought up around and always had an interest in doing.

MR: How did you get to become a “celebrity” stylist?

TC: Wow, I was very lucky. I was at my salon, Industrie Hair Guru’s when I saw an audition notice for an upcoming Bravo show called ‘Sheer Genius’. I thought it was fabulous that there was going to be a show that would educate the public on the hair industry so I went to the casting call and got picked right away. Even though I didn’t win in the end, Bravo approached me with the idea for what is now “Tabatha’s Salon Takeover” and I ran with it.

MR: As a huge fan of your show myself, I think the one thing that is so amazing in what you do is how you educate the salon owners of how to financially run their business. Scott Neesham, the owner of Chicago Male Salon told us that you spent hours and hours going through through their books and educating them on how to schedule, order product put in place an organized model for them to work with.

TC: Well, thank you Michael. The financial end of the ‘Takeover’ doesn’t get a lot of airplay but it is vital to the sustainability of the salon after I leave. Owners and staff get lazy and get into bad habits and a lot of times, as in Scott’s case, the salon business was new to him so I definitely had my work cut out for me.

MR: Chicago Male was known for only doing men’s

hair and having the client in and out in 30 minutes. What did you think of that business model?

TC: In a word, foolish! Convincing Scott that he is alienating a lot of customers by only doing men’s hair took a lot of arguing. I tried to explain that even though the salon is in Boystown, women do actually exist there and make up a big part of the community as well. Alienating such a large portion of the neighborhood just wasn’t good business or common sense. I didn’t understand why he would want to turn that money away.

MR: The staff seemed very excited as well when you brought them to the Paul Mitchell Salon to brush up on cutting women’s hair.

TC: Yes, I am all about the education. Scott’s experienced staff was all initially trained in how to do women’s hair but over the years being at an “all male” salon, they lost their touch. So to help out, I brought in a bunch of local drag queens for them to get ‘reacquainted’ with how to cut and style for the female clientele. It was also the staff at the Chicago Male Salon that really wanted to expand to do women’s hair as well.

MR: With ‘Tabatha’s Salon Takeover’ you see owners who are literally on the brink of financial ruin. How emotionally involved do you get with the owners and the projects?

TC: You ask great questions!! Well, I’m co-dependent so I am instantly emotionally attached; and look, that is OK because I don’t think I could do my best work if I didn’t feel I was emotionally invested in the salon or the people that work there.

MR: Tell me about the new charity foundation you are starting.

TC: Yes, I’ve been working with a children’s hospital here in New Jersey. Last year there was a young girl who was undergoing chemo whose dream it was that I cut her wig. I found out that a lot of the children who are undergoing cancer treatment don’t have wigs available to them.

Wigs usually aren’t covered by health insurance and they are very expensive. God forbid if the family doesn’t have the money, the kids get nothing, so it was really sad for me to see because children have a different coping mechanism going through an illness like that and having a wig when they go to school and interact with other kids is vital to their mental well being.

So I have been working with the hospital in starting up a foundation to supply wigs for these children.

MR: Because you travel so much, how has it affected your relationship and your salon?

TC: I have a very understanding girlfriend and a top notch staff. Trusting in both is what makes it work. I have been with my partner for a long time so we always find time for each other and do what we need to make the relationship work.

TC: Thank you Michael, you’re a pleasure to talk to.