Sharon is Midwestern nice. But to Robyn, her new roommate from the Bronx, that just means very nosy and very, very talkative. A comical mismatch leads to a surprising and touching friendship in this new comedy about how early-life choices lead to mid-life challenges and the unexpected rewards of bridging the divide. The Roommate is a warm, funny story about a chance cohabitation that sets two lives spinning. Think The Odd Couple meets Breaking Bad.

“I’m delighted to join Steppenwolf as the director of Jen Silverman’s The Roommate — a story of connections, misconnections, and surprises that we don’t often see onstage. I welcome the opportunity, in collaboration with actors and designers, to bring this story to life,” shares director Phylicia Rashad. 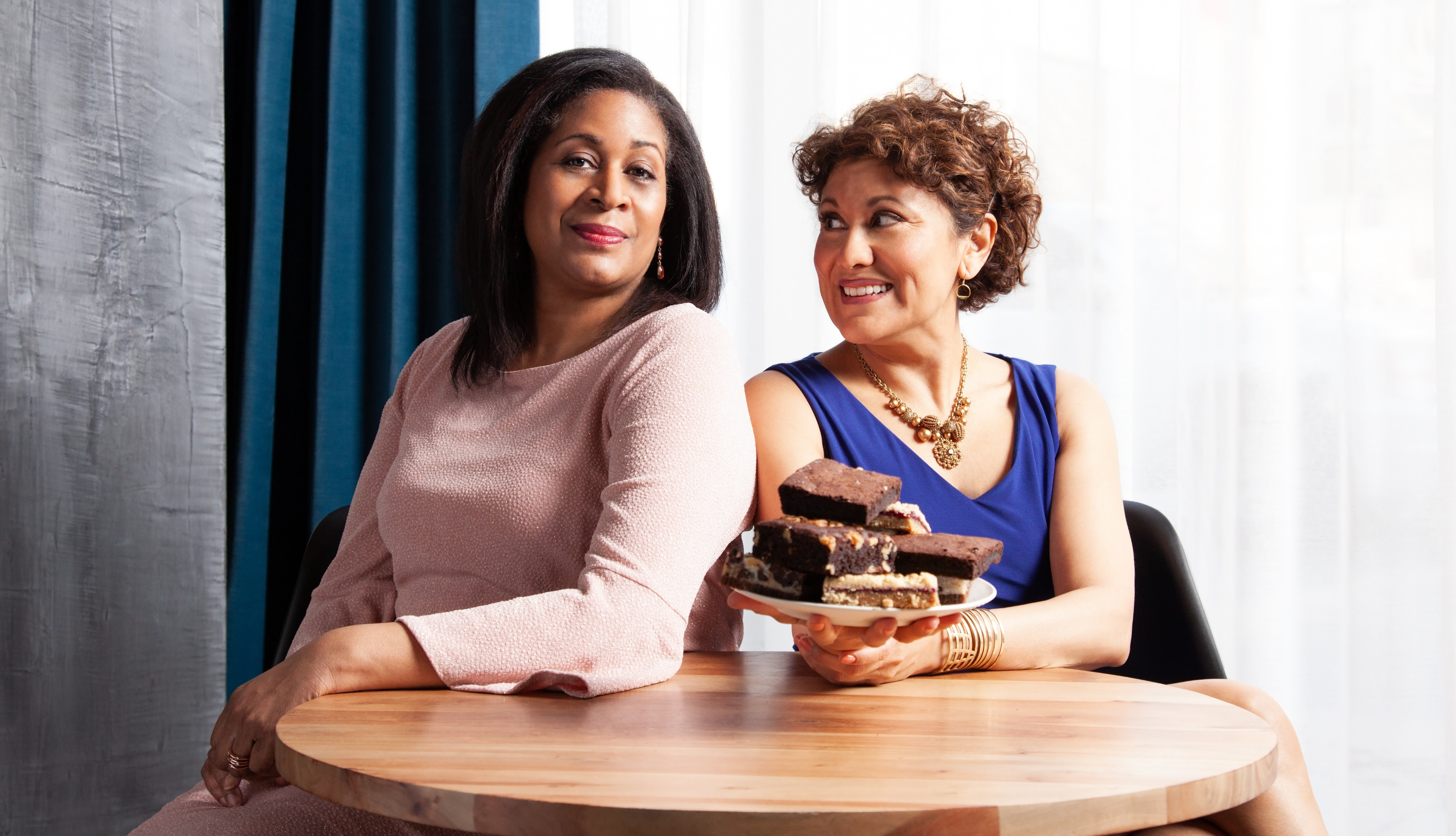 (Robyn) is a member of the Steppenwolf Theatre Company ensemble, where she has appeared in The Doppelgänger (an international farce), Tracy Letts’s adaptation of Three Sisters, Middletown, The Brother/Sister Plays, The Unmentionables, The Crucible, The Violet Hour and Morning Star. Broadway credits include Les Liaisons Dangereuses and Matilda. Other Chicago credits include A Christmas Carol, Animal Crackers, Proof, The Beard of Avon (Goodman Theatre); Sunday in the Park with George, The Madness of George III, Romeo and Juliet, Twelfth Night, A Flea in Her Ear (Chicago Shakespeare Theater); the world premiere of My Kind of Town (TimeLine Theatre Company); Execution of Justice (About Face Theatre); Our Town (Writers Theatre) and productions at Court Theatre, Northlight Theatre, Victory Gardens Theater, Chicago Children’s Theatre and Rivendell Theatre Ensemble. Her regional and New York work includes performances at the Weston Playhouse, Milwaukee Repertory Theater, Next Act Theatre, Yale Repertory Theatre and Long Wharf Theatre, Manhattan Theatre Club, American Place Theatre and the Public Theater. She has appeared on film in Chicago Fire, Save the Last Dance, The Weather Man, Stranger Than Fiction and Were the World Mine.

Sandra Marquez (Sharon) joined the Steppenwolf Theatre Company ensemble in spring 2016 and most recently appeared in The Doppelgänger (an international farce), Mary Page Marlowe and The Motherf**ker with the Hat. Other credits at Steppenwolf Theatre Company include A Streetcar Named Desire, Sonia Flew, One Arm and a Steppenwolf for Young Adults production. At Teatro Vista, where she is a longtime company member, she directed Fade, My Mañana Comes, Breakfast Lunch & Dinner and Our Lady of the Underpass and has acted in numerous productions including A View from the Bridge for which she received a Jeff Award. Last fall she completed a three-year arc playing Clytemnestra in what was billed as Court Theater’s Iphigenia Cycle (Iphigenia at Aulis, Electra and Agamemnon). Some film and television credits include Boss, Empire, Chicago Med, Chicago Justice and Timer. Ms. Marquez is on the theater faculty at Northwestern University, where she very much enjoys teaching and mentoring young people.

Phylicia Rashad (Director), one of the entertainment world’s most extraordinary performing artists, has been bringing laughter to millions of television viewers around the world, moving theatre-goers to tears, thrilling movie fans, offering new insights to students by teaching at renowned learning institutions such as Howard University and Julliard, and breaking new ground as a director.

Phylicia Rashad’s directing credits include August Wilson’s Gem of the Ocean at the Seattle Repertory Theatre, August Wilson’s Ma Rainey’s Black Bottom and Joe Turner’s Come and Gone at the Mark Taper Forum in Los Angeles (2014 NAACP Theatre Award for Best Director) and Fences at the Long Wharf Theatre and the McCarter Theatre. This spring Ms. Rashad makes her NYC stage directing debut with the comedy Our Lady of 121st Street, running off-Broadway from May 1 to June 10.

Jen Silverman’s The Roommate premiered at the Actor’s Theatre of Louisville in 2015 and has received subsequent productions at South Coast Rep, Williamstown and SF Playhouse. Additional work includes The Moors, Phoebe in Winter, The Dangerous House of Pretty Mbane (Barrymore Award) and Collective Rage: A Play in 5 Boops (Woolly Mammoth). She is a member of New Dramatists, and has developed work with the O’Neill, New York Theatre Workshop, Portland Center Stage, Berkeley Rep and the Royal Court in London. A recipient of the Helen Merrill and Yale Drama Series Awards, she’s also a two-time MacDowell Fellow and 16/17 Playwrights of New York (PoNY) Fellow at the Lark.

Visitor Information
Steppenwolf is located at 1650 N Halsted St near all forms of public transportation, bike racks and Divvy bike stands. The parking facility ($12 or $14, cash or card) is located just south of our theater at 1624 N Halsted. Valet parking service ($14 cash) is available directly in front of the main entrance starting at 5pm on weeknights, 1pm on weekends and at 12noon before Wednesday matinees. Limited street and lot parking are also available. For last minute questions and concerns, patrons can call the Steppenwolf Parking Hotline at 312-335-1774.

Accessibility
Committed to making the Steppenwolf experience accessible to everyone, performances featuring American Sign Language Interpretation, Open Captioning and Audio Description are offered during the run of each play. Assistive listening devices and large-print programs are available for every performance, and the Downstairs and 1700 Theatres are each equipped with an induction hearing loop. All theaters feature wheelchair accessible seating and restrooms, and Front Bar features a push-button entrance, all-gender restrooms and accessible counter and table spaces.

Sponsor Information
United Airlines is the Official and Exclusive Airline of Steppenwolf.

Front Bar: Coffee and Drinks
Connected to the main lobby is Steppenwolf’s own Front Bar: Coffee and Drinks, offering a warm, creative space to grab a drink, have a bite, or meet up with friends and collaborators, day or night. Open Tuesdays – Sundays from 8am to midnight, Front Bar serves artisanal coffee and espresso provided by La Colombe and food prepared by Goddess and Grocer. The menu focuses on fresh, accessible fare, featuring grab-and-go salads and sandwiches for lunch and adding shareable small plates and desserts for evening and post show service. front-bar.com

Steppenwolf Theatre Company is the nation’s premier ensemble theater. Formed by a collective of actors in 1976, the ensemble represents a remarkable cross-section of actors, directors and playwrights. Thrilling and powerful productions from Balm in Gilead to August: Osage County—and accolades that include the National Medal of Arts and 12 Tony Awards—have made the theater legendary. Steppenwolf produces hundreds of performances and events annually in its three spaces: the 515-seat Downstairs Theatre, the 299-seat Upstairs Theatre and the 80-seat 1700 Theatre. Artistic programming includes a seven-play season; a two-play Steppenwolf for Young Adults season; Visiting Company engagements; and LookOut, a multi-genre performances series. Steppenwolf Education initiatives include the nationally recognized work of Steppenwolf for Young Adults, which engages 15,000 participants annually from Chicago’s diverse communities; the esteemed School at Steppenwolf; and Professional Leadership Programs for arts administration training. While firmly grounded in the Chicago community, nearly 40 original Steppenwolf productions have enjoyed success both nationally and internationally, including Broadway, Off-Broadway, London, Sydney, Galway and Dublin. Anna D. Shapiro is the Artistic Director and David Schmitz is the Executive Director. Eric Lefkofsky is Chair of Steppenwolf’s Board of Trustees. For additional information, visit steppenwolf.org, facebook.com/steppenwolftheatre, twitter.com/steppenwolfthtr and instagram.com/steppenwolfthtr.