This fall, a sensational show is sweeping down the plain at the Skylight Music Theatre in Milwaukee.  It’s a swiftly rolling wagon loaded with superb singing and acting, exciting drama and plenty of laughs.

The show is none other than the Rodgers and Hammerstein classic Oklahoma! This spirited production, kicking off the Skylight’s 60th season, reinforces its exclamation point with an extraordinary cast and fabulous staging, brilliantly capturing the heart and soul of a territory that’s on the cusp of statehood.

Oklahoma! was the first in a series of successful collaborations by the iconic Broadway duo of Richard Rodgers and Oscar Hammerstein II. Oklahoma! scored another first when it premiered on Broadway in 1943: it launched a new genre in theater – the musical play. Oklahoma! isn’t just another great American musical, it’s a touching love story set to music about a young woman, Laurey, and two suitors vying for her hand – affable Curly and ruff-and-gruff Jud. And it’s this musical storytelling aspect of Oklahoma! that director Jill Anna Ponasik takes to extraordinary heights with her talented cast.

Right from the get-go the audience is swept away by the vocals of Skylight favorite Lucas Pastrana, excellent as ranch hand Curly McLain, singing “Oh What a Beautiful Mornin’” as he arrives on Laurey’s Aunt Eller’s ranch, hoping Laurey will attend the box social with him.  Curly and Laurey are utterly charming in “The Surrey with the Fringe on the Top” and “People Will Say We’re in Love.”  Laurey, played by suburban Chicago native Brittani Moore and Aunt Eller, portrayed by Cynthia Cobb, bring delicious feistiness to their respective roles.

Jeremy Peter Johnson nails it as Jud, the man who’s desperate to have what everybody else has.  He and Pastrana earn a load of laughs in “Pore Jud is Daid,” in which Curly tries to convince his rival that he would be more appreciated by folks if he were dead.  Johnson sang recently in the barbershop quartet of The Music Man at Chicago’s Goodman Theatre. 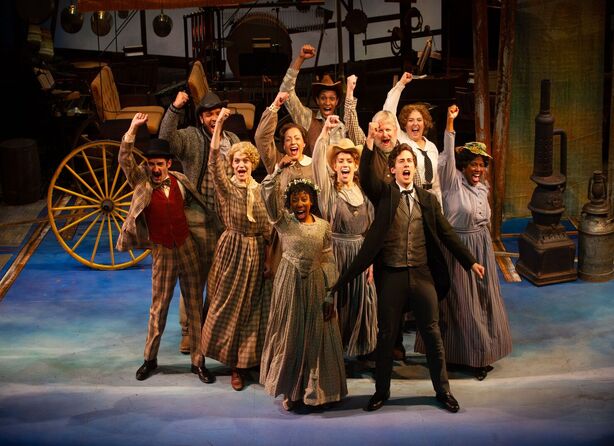 Oklahoma! also boasts another love triangle, between peddler Ali Hakim, played by Ethan D. Brittingham, Ado Annie, played by Hannah Esch and Will Parker, brought to life by Sean Anthony Jackson.  Jackson, a Chicago transplant, is delightful leading the cast in the spirited “Kansas City.”  Brittingham as Ali and Esch as Ado Annie are an audience-loving duo, bringing down the house with their well-honed comedic skills.

Other high points in this fine production include a beautifully executed dream sequence in which Laurey sees a violent confrontation between the two men pursuing her, and the finale, with the cast belting out the title tune with lots of heart, encouraging the audience to join them.

By casting African Americans in the key roles of Laurey, Aunt Eller and Will, director Ponasik invigorates Oklahoma!, breaking down stereotypes and making it more relevant for our times.  Also, keep in mind that Oklahoma! is set a time when farmers and cowboys were rivals.  That’s why when we hear the lyrics to the rousing “The Farmer and The Cowman” – Territory folks should stick together, Territory folks should all be pals.  Cowboys dance with farmer’s daughters, Farmers dance with the ranchers’ gals – we’re able to see Oklahoma! in a whole new light.  Oklahoma! was way ahead of its time, and Ponasik and company drive that point home to us.
For tickets, call (414) 291-7800 or go online at www.skylightmusictheatre.org.