With the #MeToo movement now in full swing, it takes guts for a modern-day theatrical company – in this case Milwaukee’s Skylight Music Theatre – to revive Cole Porter’s Kiss Me, Kate.  Porter’s Tony-winning masterpiece about an onstage romance and the backstage high-jinx surrounding a cast that’s in the midst of mounting a musical version of Shakespeare’s The Taming of the Shrew, is loaded with outdated gender stereotypes and derogatory comments about women and how they should be treated.  Why should anybody, then, resurrect it?

But for the Skylight, Kiss Me, Kate, which opened on May 17, accomplishes two things: it satisfies the Skylight’s goal to tell stories that sing – and, perhaps more importantly, helps us realize how things once were between the sexes, and be glad how things have changed since the times of Shakespeare and Porter.  This show could be deemed a history lesson, but in the hands of the Skylight it’s zany fun at its best.

Kiss Me, Kate is the last show Ray Jivoff directs as the Skylight’s artistic director, and it was obvious from the opener he’s ending his illustrious run at the Skylight in grand fashion.  His dazzling direction makes us actually forget the dated stereotypes of days gone because of the great work he’s able to elicit from his cast and crew.

Kiss Me, Kate is a show-within-a show.  It begins as the cast of a musical version of The Taming of the Shrew is rehearsing the opening, singing “Another Op’nin, Another Show.”  It’s this number, brilliantly executed, that gives us a strong taste of the zaniness of show biz – and sets the stage for all the slaps and shouts and outbursts and insults to follow.  And there are many, ignited by the fireworks generated by the two leads, former lovers Lilli Vanessi (Katherine in Shrew) and Fred Graham (Petruchio in Shrew).  Then there’s Lois Lane (Bianca in Shrew), the young actress with whom Fred flirts, angering his former wife, Lilli, and Lois’ boyfriend, Bill (Lucentio in Shrew), who has a gambling habit, which ushers in a pair of gangsters who end up performing in the show. 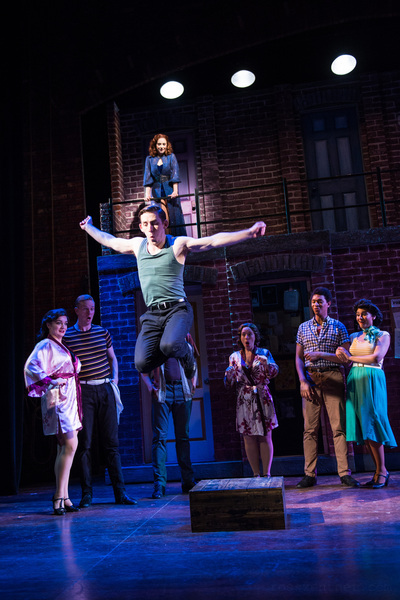 The Skylight’s production tends to lag after the opening number, but thankfully it kicks into hilarious high gear when Fred learns that his dresser, Paul (Hortensio in Shrew) has delivered his flowers and love note to Lillie, instead of to the intended receiver, Lois.  I don’t want to reveal more of the twisted plot, but the Skylight’s Kiss Me, Kate expertly weaves Porter’s sparkling musical score into the plot’s every nook and cranny from beginning to end.  Nice work.

Kiss Me, Kate boasts a first-rate, electrifying cast loaded with knockout performances that deliver the goods.  These performers can sing, dance and act – plus handle Shakespearean lines.  In other words, they conquer the challenges head-on that Kiss Me, Kate presents to them.  The cast earned its rightful share of hoots and hollers from a packed audience on opening night.  This show belongs, first and foremost, to Rana Roman as Lilli and Andrew Varela as Fred.  Their comic timing and singing talents shine from their first scene together to their last, and separately, too.  Roman demonstrates a beautiful voice with “So in Love.”  As the battling ex-lovers, she and Varela trade barbs magnificently, and then segue seamlessly into the lovely “Wunderbar.”  Varela equals Roman in the vocal department with a moving interpretation of “I’ve Come to Wive It Wealthily in Padua” and with “So in Love.”  Roman later brings down the house with a stage-commanding performance of “I Hate Men.”

Kaylee Annable, as Lois/Bianca, does a beautiful job reprimanding her gambling-addicted boyfriend Bill with “Why Can’t You Behave?”  And then, expressing her faithfulness to him, memorably performs “Always True to You in My Fashion.”  Joe Capstick as Bill/Lucentio and Sean Anthony Jackson as Paul/Hortensio dance their hearts out as they woo Bianca in the show-stopping “Tom, Dick or Harry.”  (Both Capstick and Jackson have ties to Chicago.)  Act II gets off to a sexy start with the steamy “Too Darn Hot,” danced to perfection by Jackson and several other cast members.  And Doug Jarecki and Kelly Doherty, as Gangsters 1 and 2, respectively, give new meaning to the word “hilarious” in a pair of superbly-performed supporting roles that nearly steal the show from Roman and Varela.

Kiss Me, Kate may not rank as one of my favorite stage musical, but this interpretation by the Skylight, with its sensational acting, singing and dancing and Jivoff’s fab direction, combined with the sizzling choreography by Amy Brinkman and the colorful costumes of Jason Orlenko, makes for an deliciously entertaining late-spring afternoon or evening in the theater.

Kiss Me, Kate will have an extended run through June 16 in the Cabot Theatre of the Broadway Theatre Center, 158 N. Broadway in Milwaukee’s Historic Third Ward.  For tickets, call (414) 291-7800 or go online at www.skylightmusictheatre.org.