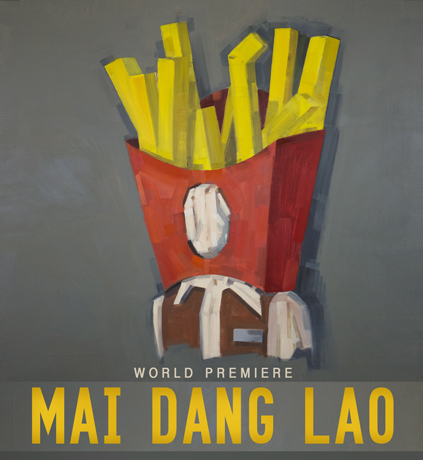 There’s a correct order to everything when you work in the fast food industry. That’s why Sophie’s such a problem for her bosses: her attitude and aloofness threaten the food chain. But when a phone call from the local police warns of a crime committed in the restaurant, Sophie’s coworkers are given permission to restore proper balance and set things in their place. A mordant and terrifying world premiere based on true events, MAI DANG LAO examines the ways we all get trapped, and what we’re capable of doing when someone lets us.

Tickets: Previews: $10 in advance or pay-what-you-can at the door. Regular run: $20 – $30.  Students/seniors/industry: $5 off all performances. Tickets are currently available at www.victorygardens.org, by calling (773) 871-3000 or in person at the Victory Gardens Box Office.

David Jacobi’s plays have been performed throughout the U.S. and in China, including the Peter Jay Sharp Theater, FringeNYC, and Penghao Theatre. His work has been developed at Portland Center Stage’s JAW Festival, RISK IS THIS, Great Plains Theatre Conference, WordBRIDGE, Kennedy Center MFA Playwright’s Workshop and PlayPenn. He is a winner of the Holland New Voices Award, Kennedy Center Theatre for Young Audiences Award, and has been nominated for the Weissburger. He received a BFA in dramatic writing from Purchase College and an MFA from UC San Diego. David is currently a Shank Fellow at Pig Iron Theatre Company.

Marti Lyons most recently directed Boo Killebrew’s The Play About My Dad for Raven Theatre, Will Eno’s Title and Deed for Lookingglass Theatre, a reading of Dana Lynn Formby’s American Beauty Shop at Steppenwolf and a reading of Ike Holter’s Prowess at the Goodman Theatre, where she received the 2015 Maggio Directing Fellowship. She also recently directed Laura Marks’ Bethany and Mine for The Gift Theatre; Catherine Trieschmann’s Hot GeorgiaSunday and Theresa Rebeck’s Seminar for Haven Theatre; 9 Circles by Bill Cain, Maria/Stuart by Jason Grote and co-directed The Golden Dragon with Jonathan L. Green for Sideshow Theatre (where she is an artistic associate); and The Peacock by Calamity West and The Last Duck by Lucas Neff for Jackalope Theatre. Upcoming projects include Wondrous Strange by Jiehae Park, Meg Miroshnik, Martyna Majok and Jen Silverman, featuring the Apprentice Company for the 2016 Humana Festival at Actors Theatre of Louisville and Prowess by Ike Holter for Jackalope Theatre Company.

From its first production, 2008’s Dante Dies!! (and then things get weird) to its Jeff Award-winning productions of Roland Schimmelpfennig’s Idomeneus (named one of the best plays of 2012 by Time Out Chicago and the Chicago Sun-Times) and Elizabeth Meriwether’s runaway robotic hit Heddatron at Steppenwolf Theatre, to the recent commercial run of its smash hit Stupid F##king Bird, Sideshow has consistently produced engaging, transcendent works across Chicago. Sideshow continues its multi-year residency at Victory Gardens in the historic Biograph Theater in the 2015/16 season.

Sideshow also produces the Chicago League of Lady Arm Wrestlers (CLLAW), a wildly popular interactive fundraising event that benefits Sideshow Theatre Company and other local charities. CLLAW has been featured in local and national press, including The Washington Post, Reuters, Penthouse Magazine and the Chicago Sun-Times and on WGN Morning News, ABC 7’s Windy City Live and CBS 2.  The next CLLAW match, MY BLOODY CLLAW-ENTINE, is Saturday, February 13 at 9 pm at Logan Square Auditorium, 2539 N. Kedzie Ave. in Chicago. For more information about CLLAW, visit www.cllaw.org.