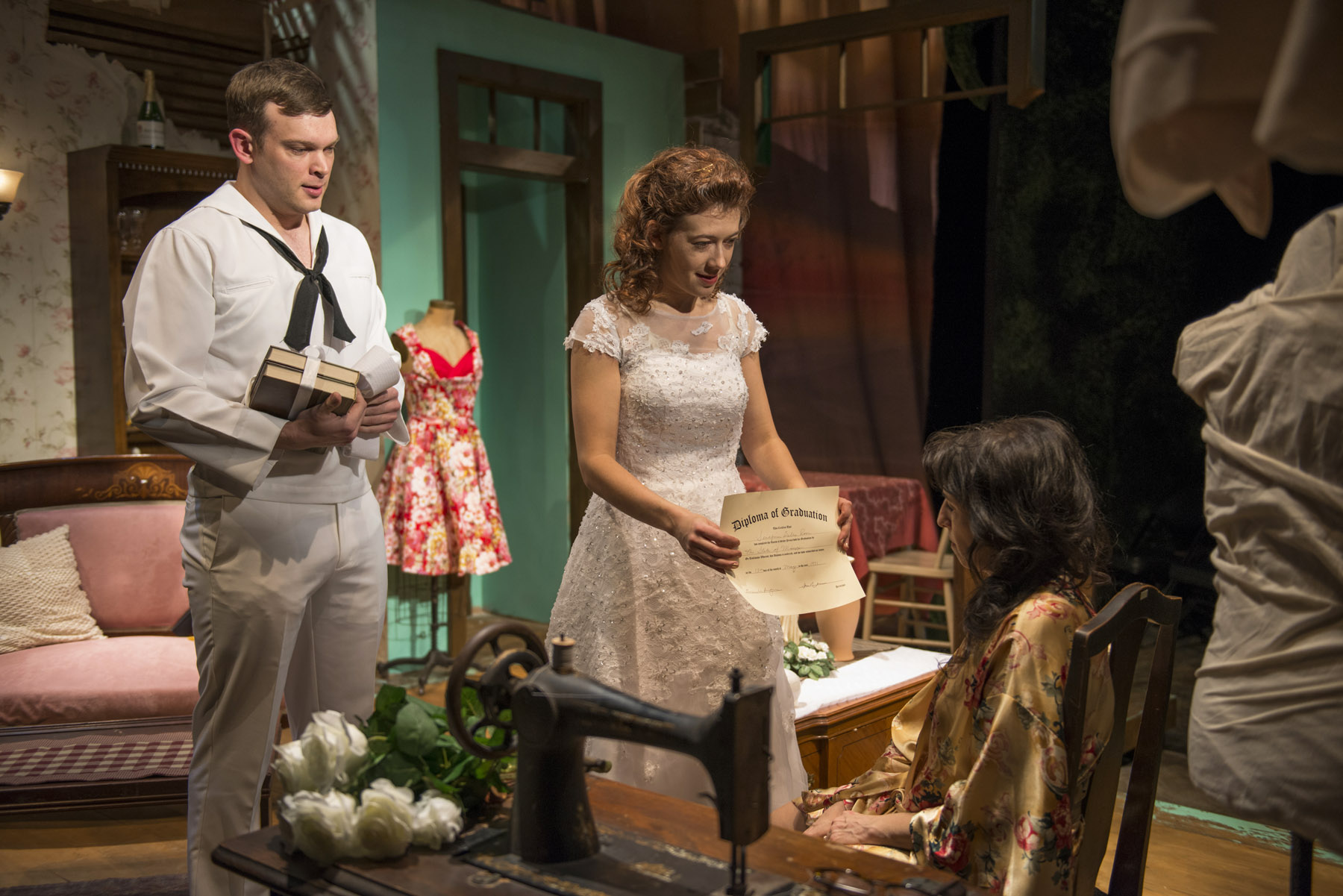 Tennessee William’s seldom done Rose Tattoo is getting a top-notch and rare revival by Shattered Globe Theatre in Chicago. Originally penned in 1950 as a vehicle for the tempestuous film star Anna Magnani it premiered in Chicago before going on to New York in 1951 with Maureen Stapleton as Serafina Della Rosa and Eli Wallach as Mangiacavallo, garnering William’s many deserved accolades, and then became a film in 1957 with Anna Magnani in the role created for her playing opposite Burt Lancaster. Most people only know this work through the film and have never seen it performed on stage. The reason that it is seldom performed is the role of Serafina Della Rosa is extremely difficult to cast because of the it was crafted around the qualities possessed only by Magnani.

William’s wrote The Rose Tattoo at the happiest point in his life as a love letter for his longtime partner Frank Merlo (a sailor) whom he gave the nickname “The Little Horse” due to Merlo’s stature and sexual prowess. Out of all of Williams’ work, this is by far the lightest, happiest and most optimistic of all his works and it imamates a warmth that restores our belief in love and second chances.

The plot, set on the Gulf Coast in the south between New Orleans and Mobile in 1951, revolves around the central character of Serafina Della Rosa who loses her husband when he is shot conducting a secret drug deal while transporting bananas (this proves to be an obvious symbol of the male anatomy) and her intense passion she held for him. She goes into a state of deepest mourning for 3 years and repeatedly asks the Virgin Mary for a sign; another truck driver who also delivers bananas, Alvaro Mangiacavallo (a “reincarnation” of her late husband) enters, turns her world upside down and teaches her that life is not over and she can love again.

Serafina’s 15 year old daughter, Rosa Della Rosa (a great performance by Daniella Colucci) falls in love with a young sailor Jack Hunter (inspired by Frank Merlo) played beautifully by Shattered Globe ensemble member Drew Schad. Serafina is convinced that she has a “wild thing” loose in the house like her late husband and tries valiantly to protect her daughter’s chastity, much against her daughter’s wishes.

Serafina, a seamstress by trade is visited by Estelle Hohengarten (a fine performance by Rachel Sled), who, unknown to Serafina, was her late husband’s lover. When she later finds out through her gossiping neighbors it unleashes a fury within her. Her late husband had a rose tattoo on his chest (hence the name of the play) and Estelle, as a symbol of her love for Serafina’s late husband, also has the same tattoo.

Director Greg Vinkler has done a great job casting the four major roles and, in the role of Serafina has wisely cast one of their ensemble members Eileen Niccolai who was born to play it (it was probably selected as a vehicle for her). From her entrance Niccolai commands the stage and completely inhabits this difficult role body and soul. Although more controlled in her volatility than Magnani she is still a force to be reckoned with. Not only is her southern dialect spot on her entire spirit is Italian which remains consistent throughout the entire evening. She is clearly the hostess of this party.

Cast opposite Niccolai as Alvaro Mangiacavallo is the charismatic actor Nic Grelli in his Chicago debut. Grelli blows on to the stage like one of the hurricanes that is prevalent in the region and, through his sincerity and charm, win us over as he does Serafina. The chemistry and talent between Niccolai and Grelli is perfectly matched and what makes the play fire. Grelli also makes us believe that his is a true Sicilian and Italian is his first language. Both of these performances are so well crafted that it is worth the price of admission alone to see. The only fault that I found with Grelli is that he is covered in tattoos which destroy the impact of Mangicavallo getting a rose tattoo on his chest as a sign of love for Serafina. No matter how much makeup is used to try to cover them they are still prevalent and distracting.

I also wish to commend the director Greg Vinkler and his team of designers for creating a believable atmosphere for the world of this play (being from the south this is the main thing that Chicago designers and directors seem to fall down on with Williams). Vinkler, who clearly has an innate understanding of this play, has staged it utilizing the entire space, having the audience completely surrounded, providing the intimacy that is so crucial for this delicate valentine.

I was however disappointed in a couple of anachronistic and poorly desgined prop choices made by designer Vivian Knouse. The play calls for a goat being captured (a symbol of the cuckhold) and carried across the stage. It was constructed of papier mache, lacking any attempt at realism. A plastic syringe (which would have been metal in the year of the play 1951) was also used onstage. While some may consider these minor details it threw me out of the carefully constructed world the team had gone to such great effort to establish. When playing with details they must be carried through the entire production no matter the expense or effort.

I also found some of the casting choices weak with the minor characters whose accents were all over the place. I did not believe the Italians were Italian or the southerners were from the deep south of the Gulf Coast region. As hard as they tried some could not master the consistency or music of the dialects and, as a result, they appeared to be artificial.

I commend Shattered Globe and Greg Vinkler for bringing to the stage a truly beautiful production of The Rose Tattoo. You should rush to see this rare revival before it closes. It will make you believe once again in the transformational power of love.

Curtain Times: Thursdays, Fridays and Saturdays at 8 pm; Sundays at 3 pm. Please note: there will be an added matinee performance on Saturday, February 28 at 3 pm;