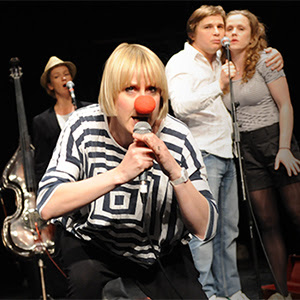 Chicago Shakespeare Theater (CST) welcomes Filter Theatre’s raucous Twelfth Night, produced in association with the Royal Shakespeare Company, as part of the yearlong Shakespeare 400 Chicago celebration. Directed by Sean Holmes, with music and sound design by Tom Haines and Ross Hughes, this enormously funny, fast-paced production of Shakespeare’s comedy is part rock concert, part improv sketch show and wholly unexpected—giving new meaning to the play’s infamous line, “if music be the food of love, play on.” This wildly energetic Twelfth Night is performed in the theater Upstairs at Chicago Shakespeare for only sixteen performances, March 1–13, 2016.

Two worlds collide in Filter Theatre’s explosive 90-minute adaptation of Shakespeare’s lyrical romantic comedy of mistaken identity. Originally commissioned for the Royal Shakespeare Company’s Complete Works Festival in 2006, the production garnered four stars from The Daily Telegraph, describing it as “rock and roll Shakespeare… blessed with wit, style, and a touch of magic.” It “puts the fun back into Twelfth Night” according to The Guardian. Audiences can experience the madness of love in this heady world where riotous concert meets the language of Shakespeare with bursts of music and hilarity, ranging from karaoke to impromptu games with the audience.

Separated in a shipwreck from her twin brother, Viola disguises herself as a man to serve as a page in the court of the lovesick Duke Orsino, only to find herself courting the grieving Olivia on Orsino’s behalf. Meanwhile, the surly Sir Toby Belch and his fellow pranksters, Sir Andrew Aguecheek and Maria, add to the confusion and humiliate Olivia’s brooding steward, Malvolio. The reappearance of Viola’s twin Sebastian, Orsino’s relentless pursuit of Olivia and a host of misplaced affections typify the madness of love in Illyria—land of make-believe and illusion.

Hailed as “one of Britain’s best and boldest devising companies” (Metro), Filter Theatre creates innovative new works and reinterprets classics in their signature whimsical form. Led by Artistic Directors Oliver Dimsdale, Tim Phillips and Ferdy Roberts, the company explores the complex interaction between movement, music, sound and text, seeking to awaken imagination in the minds of the audience—whether revitalizing a classic text or crafting a new one.

ABOUT CHICAGO SHAKESPEARE THEATER
Chicago Shakespeare Theater is a global theatrical force, known for vibrant productions that reflect Shakespeare’s genius for storytelling, language and empathy for the human condition. Throughout 2016, CST is spearheading the international arts and culture festival, Shakespeare 400 Chicago, a citywide celebration of the playwright’s 400-year legacy. Under the leadership of Artistic Director Barbara Gaines and Executive Director Criss Henderson, CST is dedicated to creating extraordinary production of classics, new works and family programming; to unlocking Shakespeare’s work for educators and students; and to serving as Chicago’s cultural ambassador through its World’s Stage Series. CST serves as a partner in literacy to Chicago Public Schools, working alongside English teachers to help struggling readers connect with Shakespeare in the classroom, and bringing his text to life on stage for 40,000 students every year. And each summer, 30,000 families and audience members of all ages welcome the free Chicago Shakespeare in the Parks tour into their neighborhoods across the far north, west and south sides of the city. Reflecting the global city it calls home, CST is the leading producer of international work in Chicago, and has toured its plays abroad to Africa, Asia, Australia, Europe, Canada/North America and the Middle East.