Second City Announces “They Wendt There: The Roast of George Wendt” With Roastmaster Jason Sudeikis 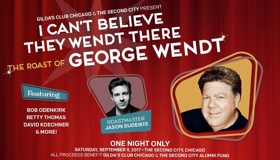 The Second City is excited to announce more big names to the star-studded roster of “I Can’t Believe They Wendt There: The Roast of George Wendt.”

“I Can’t Believe They Wendt There: The Roast of George Wendt” is a once-in-a-lifetime night of comedy and camaraderie to benefit Gilda’s Club Chicago and The Second City Alumni Fund, hosted at Chicago’s iconic Mainstage at The Second City.

The Second City is also announcing a star-studded slate of experiences up for auction via Charitybuzz.com, including:

More information about these packages can be found here:
https://www.charitybuzz.com/support/GildasClubChicago

Tax-deductible tickets for the “I Can’t Believe They Wendt There: The Roast of George Wendt” are on sale now and are organized into four ticketing tiers.

The 1959 Package ($1,959 each) features a backstage experience led by a Second City’s Behind the Bentwood tour guide including special surprise guests. Open bar & dinner in Mainstage Theater provided by the best of Chicago’s classic cuisine is also included.

The Norm features general admission seating ($1,000 each) and includes open bar & dinner in Mainstage Theater provided by the best of Chicago’s classic cuisine.

JUST ADDED:
Mezzanine Package includes general admission seating and open bar and dinner in Mainstage Theater provided by the best of Chicago’s classic cuisine. This package is broken down into 3 ticket options, 1 ticket ($500), 2 tickets ($750) and 4 tickets ($1000).

Tickets are tax-deductible and can be purchased online at www.secondcity.com or by phone at 312-664-4032.

About Gilda’s Club
Gilda’s Club Chicago supports anyone living with cancer – men, women, teens and children – along with their families and friends, as well as those who have lost someone to cancer. Their innovative program, including more than 300 free activities each month, is an essential complement to medical care and offers support groups, educational lectures, healthy lifestyle workshops, resource referrals, and social opportunities. Their mission is to ensure that all people impacted by cancer are empowered by knowledge, strengthened by action and sustained by community. Visit www.gildasclubchicago.org or call (312) 464-9900 to learn how to join, volunteer or donate.