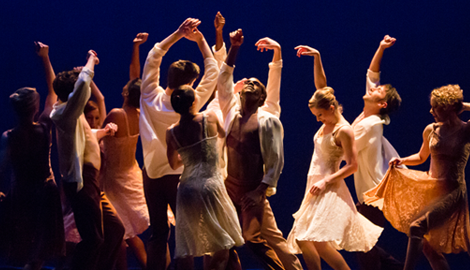 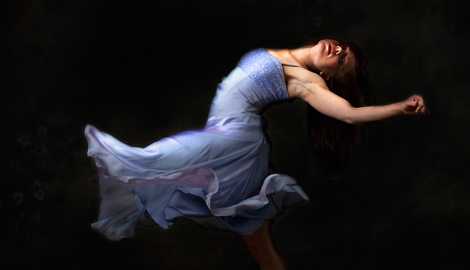 The Auditorium Theatre of Roosevelt University welcomes back River North Dance Chicago (RNDC) for a special Fall Engagement as the company says farewell to retiring Artistic Director Frank Chaves on October 3, 2015 at 7:30 p.m. The celebratory performance will feature the company’s most beloved works along with some of Chaves’ favorite creations showing his unique and visionary leadership. Tickets ($28– $68) are available online at AuditoriumTheatre.org, by calling (312) 341-2300 or in-person at the Auditorium’s Box Office (50 E. Congress Pkwy).

“It has been the privilege of a lifetime to be at the helm of such an extraordinary company and to see the growth that RNDC has achieved during my tenure as Artistic Director,” said Chaves. “Although I may be stepping down as a director, I will always be a part of this incredible group of individuals who tirelessly dedicate their lives to making innovative, powerful dance. I know that River North has a bright future and I look forward to seeing the amazing things they have in store.”

An internationally recognized choreographer, teacher, mentor and industry leader, Frank Chaves, the 2014 “Chicagoan of the Year” (Chicago Tribune), has dedicated his life to the creation and advancement of contemporary jazz dance. Chaves’ body of work and artistic vision has buoyed a local performance troupe into one the country’s most popular dance companies, thrilling audiences with its technical precision, emotive dancers, commanding choreography and versatile repertoire. This special engagement will pay tribute to the 23 years Chaves spent curating a diverse repertoire of the world’s most well-known and respected dance makers, mentoring generations of new dancers all while creating 25 memorable works for the company. RNDC’s only Chicago performance this season will feature three of Chaves’s signature pieces including “Love Will Follow,” “Temporal Trance” and one of his most noted pieces, “Habaneras, The Music of Cuba.”

“Having RNDC on the Auditorium’s landmark stage is always a treat, but to host Frank Chaves’ last performance as Artistic Director is a truly special and historic occasion that we are thrilled to be a part of,” said Auditorium Theatre Executive Director Brett Batterson. “This engagement will be an exceptional tribute of incredible dance and is a momentous opening to this season’s ‘Made in Chicago’ Dance Series.”

The Auditorium Theatre Dance Series is sponsored by NIB Foundation.

The 2015 revival of “Love Will Follow” is generously underwritten by the Bill and Orli Staley Foundation.

Choreographed by Co-Artistic Director of BodyVox Ashley Roland, “Beat” (2001) is a structured improvisational piece. This percussive and boldly rhythmic work, set to an original score by Evan Solot, combines the dancer’s own movement with segments grounded and molded by Roland’s specific movement vocabulary. Historically a solo piece, for this special engagement, “Beat” will be performed as an all-male trio.

The 2015 revival of “A Mi Manera” is generously funded by Joyce and Bruce Chelberg.
“Renatus” by Nejla Yatkin

Nejla Yatkin’s spellbinding choreography explores the beauty as well as complexity of memory, transformation and identity through movement. Hailed by critics as “divinely elegant” (Time Out Chicago), “Renatus” (2012), Latin for “Rebirth,” features a single female dancer that “seems like an embodiment of womanhood, rooted in nature yet capable of the heights of human feeling” (Dance Magazine) as she partners a magnificent red gown (with a train that’s 30 feet in length). This piece, created for dancer Jessica Wolfrum and danced by her once again during this special performance, celebrates the seasoned RNDC performer, who is also retiring from the company after an incredible 14 years.

This stirring, spiritual work by Randy Duncan, was originally choreographed for Joseph Holmes Chicago Dance Theatre in 1991 and acquired by RNDC in 1997. “Turning Tides” is divided into two sections; “Adrift,” a somber, soulful solo and the second, “Storm,” a defiant, emotion-laden ensemble work. Together, the two sections take the viewer on a “spiritual odyssey” (Chicago Sun Times) set to the music of Sam Harris.

The 2015 revival of “Turning Tides” is generously underwritten by Gene and Tita Zeffren.

Dedicated to choreographer Frank Chaves’ mother, Maria, who fell ill and passed away during the creation of “Temporal Trance” (1998), the work evolves in three very different sections from a dramatic, sculptural opening that feels haunting and ceremonial, progressing to a driving, pulsating, rhythmic, fast-paced finish all set to music by Peter Gabriel, Vangelis and Gabrielle Roth and the Mirrors. The first and second sections represent the passing of a soul from one side to the other; with the final section representing the frustration, helplessness and anger of loved ones left behind. “I explored three very different qualities of movement in order to represent the different stages we all go through in death and the loss of a loved one, a mesmerizing feast for the eyes, soul and spirit,” said Chaves.

“The Man That Got Away” by Sherry Zunker

Using the novel structure of a stationary partner, Sherry Zunker perfectly portrays the anguish of lost love in “The Man That Got Away” (1990). A distraught woman laments the one that got away by throwing herself underneath, around and even on top of a motionless gentleman who fails to respond to her attention. A mixture of sorrow and desperation are seen as Lauren Kias, highlighting her 10 years with RNDC as she retires from the company, dances an intense solo piece set to the music of Howard Arlen and Ira Gershwin, performed by Judy Garland.

Excerpt from “Train” by Robert Battle

“Train” (2008) by critically-acclaimed Alvin Ailey American Dance Theater Artistic Director Robert Battle, is a look at an abstract ritual set to a percussive live recording by Les Tambours du Bronx. The ritual reflects a dancer’s life on stage while showcasing them as a warrior, highlighting their constant rising and falling. The Chicago Tribune states “Train” is “…an innovative, seemingly harsh, but ultimately irresistible assault to a metallic, percussive score, flush with all manner of clever choral lines and nifty, intricate footwork.” The solo excerpt performed at this engagement, created on dancer Hanna Bictson and performed by her once again, will highlight her 10 years with the company.

“Habaneras, The Music of Cuba” by Frank Chaves

One of RNDC’s signature works, “Habaneras, The Music of Cuba” (2005) is an ode to the 1950s-era Big Band sounds of Cuba, Frank Chaves’ native home. This staple work features the full company and celebrates the scores of Cuba’s musical luminaries, including Ernesto Lecuona, Carlos Puebla and Silvio Rodríguez.

“‘Habaneras’ is a vibrant full-company piece that is a tribute to my native Cuba and celebrates the country’s most popular composers who have made music that has been a part of my life since I was a child,” said Chaves. “This piece was inspired by and dedicated to my father who is responsible for creating my love of the arts and to the many joys and fulfillment that music can bring to the soul.”

The Auditorium Theatre of Roosevelt University, located at 50 E. Congress Pkwy, is an Illinois, not-for-profit organization committed to presenting the finest in international, cultural, community and educational programming to Chicago, and to the continued restoration and preservation of the National Historic Landmark Auditorium Theatre.

The Auditorium Theatre is generously supported by the MacArthur Foundation, the Illinois Arts Council, the Sage Foundation, and the Palmer House Hilton. For more information about programming, volunteer and donor opportunities or theatre tours, call (312) 341-2310 or visit AuditoriumTheatre.org.

Critically acclaimed for their athletic, sensual and dynamic repertoire River North Dance Chicago presents dynamic works that combine athletic prowess and artistic perspective with bold, theatrical flair. Founded in 1989, RNDC is has been under the leadership of Artistic Director Frank Chaves who strives to demonstrate depth and sophistication with a commitment to creating an accessible, enriching experience for audiences. The company continues to make a name for themselves on the world stage travelling throughout the country and internationally. RNDC participated in the IV International Ballet Festival in Cali, Columbia in 2010, the Busan International Dance Festival in Korea in June 2011, toured to Germany and Switzerland on an 11-city tour Fall 2011 and a 5-week, 17-city tour of Russia. The company continued to tour internationally during the 14 – 15 Season with performances in Israel, Germany, Switzerland and Luxembourg. Core works by Chaves are augmented with an array of pieces by nationally and internationally renowned choreographers including Mauro Astolfi, Adam Barruch, Robert Battle, Ashley Roland and Nejla Yatkin, among others. RNDC has been the subject of three Emmy Award-winning WTTW Chicago Television specials produced by HMS Media. They have been heralded by the Chicago Sun-Times stating “this company has been dancing brilliantly for many seasons, but it rarely has looked better” and they continue to be a vital member of the Chicago community through their ongoing commitment to educational and artistic programming through dance.