Redtwist’s Enaging GEEZERS Teaches Lessons from Our Past 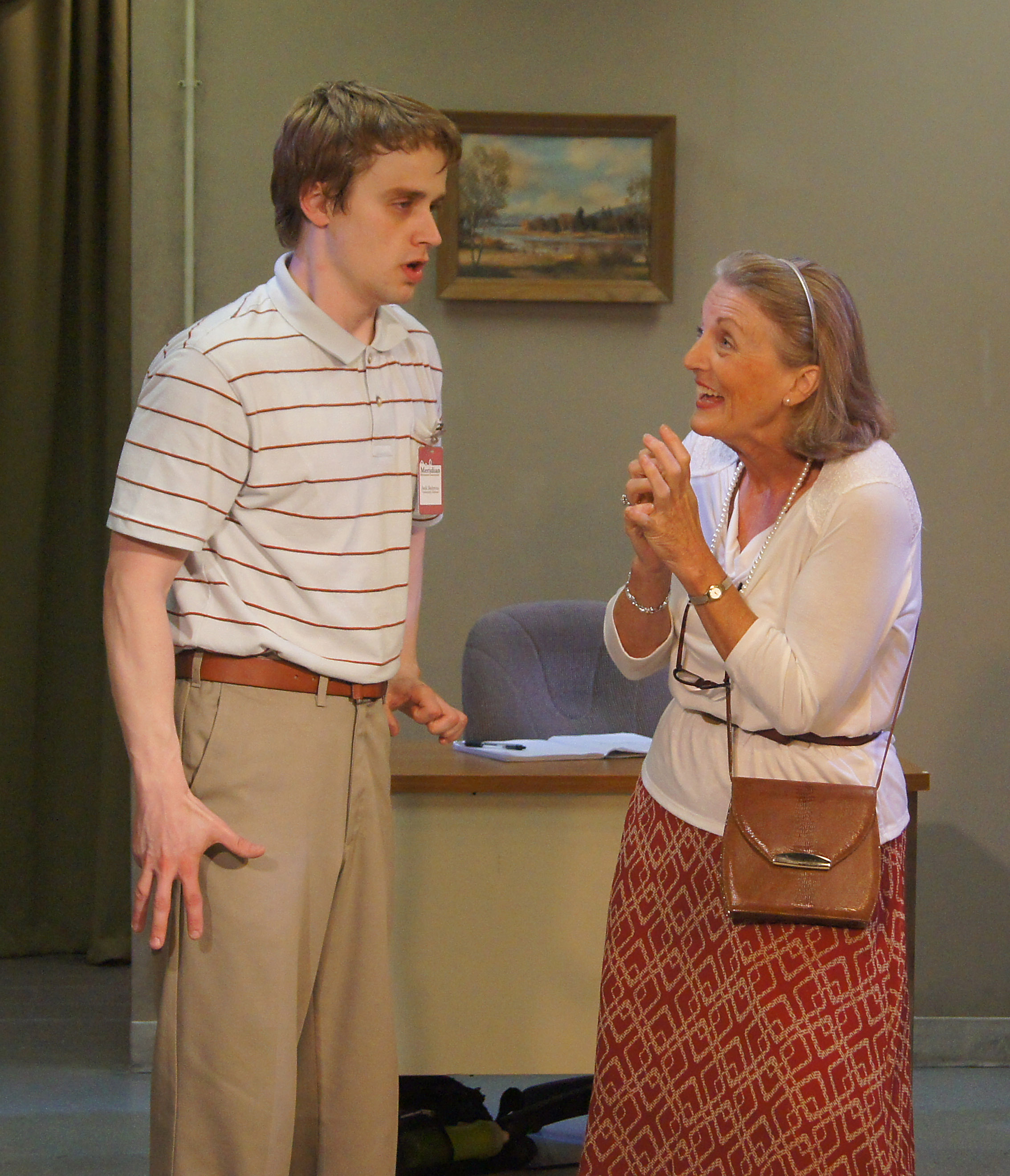 Redtwist Theatre in Edgewater has a twenty year history of producing consistently good work, (a rarity for any theatre company) and attracting a mix a talented actors, designers and writers to their tiny storefront in Edgewater.  The playing space totally transforms with each of their productions and the action is always up close and personal.

In her director’s notes Jan Ellen Graves proclaims that “you can’t lie on our stage meaning that everything is always truthful”.  “And because you are so close you’ll see right through us if we are lying”.  It is a bold statement to make and one that is even more difficult to maintain.  Tommy Lee Johnston’s beautiful new play is honest and achieves Redtwist’s bold statement – mostly.

Geezers, in its world premiere, centers largely on the character Jack, a neurotic young man who does not like people, animals, or much of anything for that matter, who comes to work at a retirement community.  Nurse Practitioner Gina takes a liking to Jack and suggests that, as a form of therapy and bonding with the residents he should capture their stories and compile a book.  In the course of the evening each of the residents revisits and comes to term with their past.  In fantasy movie sequences Jack becomes a member of their story and, as a result grows as a person, learns to love and witnesses the power of forgiveness. Sure this plot has been used before however Tommy Lee Johnston brings a Tennessee Williamsesque lyrical quality, use of language and characters that are beautifully drawn, poignant and funny.  He is a writer of great magnitude, human understanding and one of the finest new playwrights I have seen in quite a while.  That said there are a couple of major credibility issues with the script that mars its truth.

The premise of employing someone as outwardly screwed up as Jack in this kind of retirement facility is not credible and insurance companies would never allow him around old, feeble or helpless patients

I also found some credibility with the mix of residents in this well-worn retirement facility.  The majority appears to have come from blue collar or modest means with the exception of Kate, was once an actress who appears that she comes from money and would not be caught dead in a run-down home.

I also felt that the ending was weak and Johnston should have ended it a scene earlier.  The script could use a trim of about 10 minutes as the second act dragged a little at the beginning.

Director Jan Ellen Graves has assembled a largely outstanding cast of older, seasoned actors to play the residents and some fine young actors who play their younger selves (very effectively done).  The resemblance of the older characters to their younger counterparts is amazing to say the least and believable (very tricky to pull off and usually strains credibility).

Aaron Kirby in the role of Jack is, without a doubt, a fine young actor. He has great charm and likability which helped me stay with him throughout the two hours and twenty minutes.  I did find the fact that he appears in the same clothes over several weeks to lack credibility as it did not appear to be a uniform.  This choice impacts the timetable of the show and took me out of the play for a moment.

Jacqueline Grandt who plays the Nurse Practitioner Gina provides one of the strongest performances of the evening.  She is an actress of great honesty (with the exception of some early crying moments), and strong choices in her acting.

Donna Steele who portrays the actress Kate, one of the residents plays with grace, style and honesty, delivering some of the best lines in the show.  Kate has been married seven times loves men (but not sex) craves attention and fights every day to remind her that she is still vibrant, attractive and desirable.

Kathleen Ruhl plays resident Emily (a subtle, comic performance of great skill) who suffers from dementia spends all of her time in front of a television in a routine that is touching and true (I have volunteered in resident homes and her performance is spot on).  As always Ruhl plays with tremendous attention to the small details of her character that make sets her apart from the rest.

Bruce Cronander’s Ray spends much of time sleeping in his chair. Playwright Johnston masterfully saves his harrowing story for last. I do not wish to spoil it but his story is disturbing and his emotion deep, heartfelt and moving.  This is a fine actor in a great role in a great story.

Michael Bartz, who plays Croanader’s younger self, possesses strong presence and physical resemblance to his counterpoint.  However during Ray’s story he fell short in capturing the harrowing mix of emotions that come with the decision of assisting with euthanasia.  He is a compelling actor but he needs to delve a little deeper into his own emotions to capture and connect to the conflicting emotional complexity of a person put in this impossible situation.

Julie Dahlinger, young Kate (Donna Steele’s younger self) also bears a striking resemblance to Steele, not only physically but vocally as well, and brings believability to the role.

Caleb Fortune, who plays the younger incarnation of Brain Parry’s Neil, a Vietnam Vet with many scars, does not fare as well.  I did not feel that Fortune, being young and far removed from this time in history, understands the role of a Vietnam Vet and what it feels to have to make a quick decision of whether to kill or be killed (an exceptionally fine example of Johnston’s skill as a writer).  He is also not given any assistance in establishing credibility with possessing plastic firearms (I know Chicago has a bizarre relationship to guns and with all of the crazies running around today having real firearms onstage is not an option).  However I do think the prop designer could have done a better job in creating something more realistic or at least made out of metal (this also strains the truth on stage mantra of Redtwist and where they tend to fall down on several other occasions) that poses more of a threat when pointed at one.

Brian Perry, another Redtwist stalwart, does a fine job with the older Vietnam vet, Neil.  However I d not believe him old or infirm enough to be in a retirement home.  His is strong and agile in his movements even though he uses a cane.  He does slow down at the end of the show and I wish he would begin at this point in establishing the physical credibility of Neil as more infirm and frail.

Debra Rodkin, who is Emily’s long lost daughter given up at adoption, remarks to Jack how she and her mother have the same faces.  It is eerie how true this is.  They do have the same faces and could be mother and daughter (I know I am repeating myself but being in the theatre I know how difficult this is to achieve and how it often fails).  Rodkin gives a dramatic and touching performance.

Lastly I wish to address David Federman’s lighting design which, although creative, provides a jerky feel to the show.  He uses overhead fluorescent lights to give the appropriate institutional feel, but the issue here is that you cannot dim them and they flash on and off, throwing the viewer in and out of the story.  This was truly annoying and destroyed much of what I feel should have been smooth to match Johnston’s writing style.

The same is true of Jan Ellen Grave’s direction of the piece – it felt choppy.  Although she coached some strong performances out of the actors she does not capture the fluidity of the transitions (some of this is a larger space is needed to allow shifts to different areas) or realization to unleash the full power of Johnston’s script.  This was most apparent in the long monologues which provide the most challenging parts of Johnston’s writing.   It seemed that the younger actors came right to the point of a breaking open a moment fully and stopped.  I also felt that she directed them in primary emotional colors, forgetting the shades that blend together to create a full palate.

Sound design by Morgan Lake was well done as was Erich Luchen’s scenic design (the horrendous art prints on the walls and the accumulated dirt on the corners of the rooms were a nice touch and realistic).  Sarah Jo White’s costumes were largely appropriate and reflected the characters.

The star of this production however is Tommy Lee Johnston who has provided Chicago a great story with beautiful characters, poetic language and themes that will touch and reverberate in your soul for a long time to come.