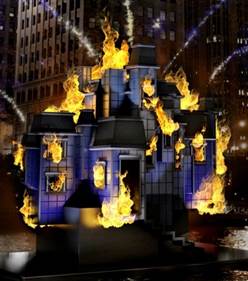 Redmoon, Chicago’s 24-year-old theater company known for “Spectacle Art” and free summertime community performances, partners with the City of Chicago’s Department of Cultural Affairs and Special Events (DCASE) and the Chicago Park District (CPD) to present the inaugural Great Chicago Fire Festival. A new and totally free urban ritual celebrating Chicago’s grit, greatness and renewal following the devastating Great Chicago Fire of 1871, as well as showcasing the rich diversity of neighborhoods that have arisen since, the Great Chicago Fire Festival culminates in a unique public River Bazaar and pyrotechnic Grand Spectacle on the main branch of the Chicago River, Saturday, October 4.

From 5:30 to 8 p.m., two busking stages will feature local performers in a lead-up to the Grand Spectacle performance.  The EnjoyIllinois.com Music & Spoken Word Stage will feature local musicians and poets, located in Pioneer Court at 435 N. Michigan Avenue.  Three blocks west in the AMA Plaza by the Langham Chicago Hotel at 330 N. Wabash Avenue, the BMO Harris Dance Stage will feature an Urban Dance Battle as some of Chicago’s top hip-hop, breaking and footworking crews go head-to-head.  Both events are free.

The Great Chicago Fire Festival main event begins at 8 p.m. as Grand Marshals Jesse Spencer and Taylor Kinney, stars of the hit television drama Chicago Fire, ignite a fiery cauldron on the Michigan Avenue Bridge, which will be lowered to waiting watercraft on the river below, an act mirrored on the Columbus, Wabash and State Street bridges by community leaders and students from After School Matters, who worked with Redmoon over the summer to design and construct the cauldrons and other elements in the Festival. A total of 15 Fire Cauldrons will be ignited and lowered to spark the performance spectacle.

As live music from the Chicago Children’s Chorus fills the air, a Victoria-era-inspired steamboat motors along the river accompanied by three mini steamboats. As they reach each of three moored platforms in the middle of the river, the steamboats signal the primary fire ritual performance to begin. Three house-like sculptures on the platforms, designed to resemble homes circa 1871 just before the historic Great Chicago Fire, will be magnificently set ablaze, burning away to reveal three symbolic cores.

A dazzling fireworks display set to music follows, designed by Las Vegas-based company Pyrotechnico. To close the ritual performance, 15 projection screens on boats on the water, each representing a neighborhood partner, will display photographs of local community members, celebrating the collective identity of Chicago today. Finally, 75 kayaks pulling buoys of prairie grass will appear from each end of the river, representing the renewal of the Chicago River to its pre-industrial natural splendor.

“Together with the City of Chicago, we hope to create a unique event for Chicagoans that captures the world’s imagination,” said Jim Lasko, Redmoon Executive Artistic Director.  “Chicago is distinguished by the determination to innovate, to reinvent, to rise from the ashes.  From the earliest prairie fires off Wolf Point to the City’s rebirth following the Great Chicago Fire of 1871, Chicago’s history is marked by episodes of destruction and renewal.”

The neighborhood Summer Celebrations and October 4 River Bazaar and Grand Spectacle are all completely free.  No tickets are required.

The Grand Spectacle performance comes after a summer-long engagement with the Chicago community, where Redmoon traveled to the 15 official Fire Festival neighborhoods to present free, public events and art activities – the majority held in Chicago parks – as part of the Great Chicago Fire Festival initiative.  In each of the 15 neighborhoods, Redmoon hosted Summer Celebrations to engage the residents and empower them through food, music, art and collaborative creation. Redmoon partnered with a total 38 civic and cultural organizations in these areas to make the Summer Celebrations possible.

The Great Chicago Fire Festival is in partnership with The City of Chicago, Department of Cultural Affairs and Special Events and The Chicago Park District, and presented by BMO Harris Bank, The Illinois Office of Tourism, and The Pritzker Foundation, with partnering sponsorship support from The Boeing Company, Allstate Insurance Corporation and Digitas, LBI. Support also comes from The Bluhm Family Charitable Foundation, The Chicago Community Trust, The Cookie Jar Foundation, David and Suzu Neithercut, The Polk Bros. Foundation, The John D. and Catherine T. MacArthur Foundation, The National Endowment for the Arts, Weber Stephen, LLC and a grant from ArtPlace America, a collaboration of leading national and regional foundations, banks and federal agencies accelerating creative placemaking across the US.

About the Chicago Department of Cultural Affairs and Special Events

The Department of Cultural Affairs and Special Events (DCASE) is dedicated to enriching Chicago’s artistic vitality and cultural vibrancy.  This includes fostering the development of Chicago’s non-profit arts sector, independent working artists and for-profit arts businesses; providing a framework to guide the City’s future cultural and economic growth, via the 2012 Chicago Cultural Plan; marketing the City’s cultural assets to a worldwide audience; and presenting high-quality, free and affordable cultural programs for residents and visitors.

Redmoon‘s mission is to transform the experience of Chicago through free large-scale theatrical events that promote community, creativity and an empowered democracy.  Redmoon burst into Chicago’s cultural consciousness with its award-winning production of Moby Dick in 1995. While the indoor productions continued to receive critical acclaim and popular support, Jim Lasko chose to focus the theater’s energy outdoors, where Redmoon sought to deploy spectacle to bridge difference and transform the ways that people see and understand public spaces.  Over the past 23 years, Redmoon has become a highly valued Chicago institution with its high-profile collaborations, vibrant outdoor performances and authentic community partnerships.  In 2009, Lasko joined forces with long-time collaborator Frank Maugeri to co-lead Redmoon as it garnered international attention for its unique productions, site-specific performances and participatory events. Since 1991, Redmoon has performed for more than 250,000 people in 30 different neighborhoods in 116 public spaces.