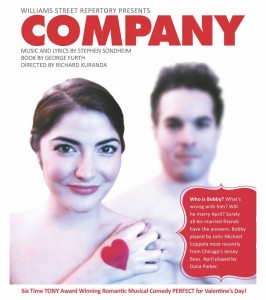 Founding Artistic Director Richard Kuranda and Williams Street Repertory have announced that John Michael Coppola of Chicago’s Jersey Boys will star as Bobby in their upcoming production of Company opening on February 1, 2013 at Raue Center For The Arts.

Company will run through February 16, 2013 (select dates and times). The book is by George Furth, and music and lyrics are by Stephen Sondheim. Tickets are on sale now online via rauecenter.org, and through the Box Office at 26 N. Williams Street or by calling 815.356.9212.