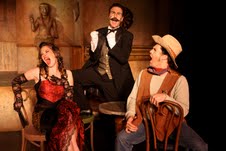 Quest Theatre Ensemble offers a deep dish of melodrama with Males Order Brides or Big Harry Deals Scandalous Scheme, directed by James T. Scott III. Opening is Friday, September 7 at 8:00 p.m. at The Blue Theater, (On the campus of St. Gregory the Great Church) at 1609 West Gregory (Gregory and Ashland). Tickets and information are available at www.questensemble.org or throughreservations@questensemble.org or 312-458-0895.
Shifty lawyer Big Harry Deal thinks he has hatched the perfect scheme to make a quick buck. By hiring actress Starr Billings to trick four unsuspecting potential grooms into false wedlock, Harry can make his move, luring the four hopeless saps into a mine on their wedding night and blowing them up, leaving Starr the beneficiary and himself as a swindling profiteer. What Harry doesn’t anticipate is the possibility that true love conquers all and when good vs. bad, the bad doesn’t stand a chance. Audience members are invited to bring their rowdy attitudes and talk back, boo, hiss, and throw popcorn to support their hero and bash the villain!
Quest Artistic Director, Andrew Park, states, “This is the third melodrama that Quest has produced—and our audience LOVES them. A few years ago we produced Barry Manilow’s musical version of The Drunkard. More recently we did a hilarious Zorro melodrama. We regularly are asked, “When do we get to throw popcorn again?”Males Order Brides is our answer to these constant cries. Dear loyal fans of Quest melodrama: You asked for it, now come and get it!”
James T. Scott III (Production Director) is pleased to return to Quest once again, having previously designed sets for Into the Woods and The People’s History of the United States. James has designed shows from New York to Nebraska, and is currently putting the final touches on his second book, This Book is Not Free: But Our Theatre Should Be.
Billy St. John (Playwright) Billy St. John fell in love with theatre when he made his stage debut at 14 in a community theatre production of Medea. His involvement began with acting, then shifted to directing, and — eventually — playwright. The Clarksville, Tennessee, native earned his Bachelor of Science degree in Secondary Education with majors in English and Speech/Theatre, then received a Master of Arts degree in TV/Film. He taught school for 10 years before becoming a community theatre director at Ft. Campbell, Kentucky, for 17. It was while working at Ft. Campbell that Billy wrote his first play an audience-participation murder mystery, which he directed at the Soldier Show Center on post. The audience response was so enthusiastic, he decided to submit the play to publishers. It was accepted, and with its publication in 1990, Billy became a professional playwright. To date, Billy St. John has written more than 50 plays, many of which are available through Pioneer Drama Service. They include comedies, mystery-comedies, and melodramas. Billy enjoys travel and attending plays. Billy always likes to hear from groups that have produced his plays.
The cast of Males Order Brides or Big Harry Deals Scandalous Scheme includes:Jason Bowen (Big Harry Deal) who is a founding member of Quest Theatre Ensemble and been seen in productions including Barnum, The Wizard of Oz, The Drunkardand A Kiss From Alexander (Jeff nominated); Keith Cavanaugh (Grubby Shurtz) who has worked with the Shedd Aquarium, Bailiwick, Theatre-Hikes, and Awesome 80’s Prom; Laura Deger (Tiara Diamond) who has performed with Caffeine Theatre, Chicago Opera Vanguard, Factory Theater, and Fury Theater; Grant M. Johnson(Lucky Betts) who has performed with Cincinnati’s This Ain’t Real Theatre Co.; Jason Nykiel (Forrest Green) who has worked with Remy Bumppo, Navy Pier, Pride Films and Plays and Project 891; Bruce Phillips (C.D. Nichols) who has performed with Second City, The Annoyance Theater and iO; Jacqueline Salamack (Calico Shurtz) who has worked with Explore Theater and TelloFilm; Kieran Welsh-Phillips (Starr Billings) who has performed with First Folio, Circle Theatre and Bruised Orange; andLisa Witmer (Trinket LaGlitz) who has worked with Chemically Imbalanced Comedy Theater.
The Males Order Brides or Big Harry Deals Scandalous Scheme staff includes: Nick Rupard (Scenic Designer and Bell Ringer), Jana Anderson (Costume Designer),Mike Nardulli (Lighting Designer), Jason Bowen (Production Manager), Emma England (Stage Manager), Julie Taylor (Scenic Artist) and Sydney Sorrell (Assistant Stage Manager).
Quest Theatre Ensemble
Quest was awarded its first Non-Equity Jeff Award (in the category of Artistic Specialization) for its 2010 production of Evolution/Creation. Evolution/Creationgarnered Quest four additional nominations in the categories of Production – Musical, Director – Musical, New Work, and Music Direction. Quest Theatre was also nominated for the 2008-2009 Non-Equity Jeff Award for New Work for its 2008 production, People’s History of the United States.
Quest Theatre Ensemble is dedicated to being the People’s Theater of Chicago. Whether in reverent procession down the gothic aisles of a quiet sanctuary, parading festively through the crowded streets of Chicago, or creating magical spectacles from behind the footlights on the stage – Quest creates visual and meaningful productions that “Inform, Delight, Inspire and Unite.” Committed to making theatre accessible to everyone, the Ensemble chooses stories that have universal appeal and finds innovative ways to engage the community.
Quest believes in non-exclusionary art, and therefore does not charge for their productions. Quest’s spectacle performances feature their unique style of puppetry, whimsical humor and poignant message of art for everyone in every production. Former Mayor Richard Daley described Quest as, “The theatre with a conscience!”