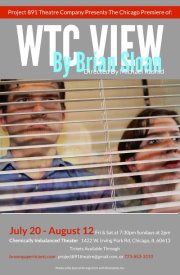 Project 891 Theatre Co. has announced the second show of its exciting 2011-2012 season featuring two Chicago premieres that ask the question: “How do we redefine normal after a national tragedy?”

The season closes with Project 891 presenting the Chicago premiere of WTC View by Brian Sloan, directed by ensemble member Michael Rashid, opening Friday, July 20th at Chemically Imbalanced Theater. WTC View centers around Eric, whose ad for a roommate to help him afford his post-boyfriend NYC rent appears in the Village Voice on September 11th, 2001. Its main selling point? A view of the World Trade Center.

how to learn spanish
how to get your ex back

Tickets are $20 and can be purchased throughBrown Paper Tickets, reserved by emailingproject891theatre@gmail.com, or by calling (773) 853-3210

For more about the show, visitwww.project891theatre.com.