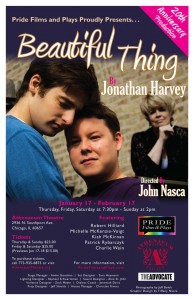 Please note that the production was originally announced for the Luna Central space, but will now be performed in Studio Three at the Athenaeum Theatre.

Tickets are $15 for previews, $23 on Thursdays and Sundays, and $25 on Fridays and Saturdays.  For tickets, reserve on-line at www.athenaeumtheatre.org or call the box office of the Athenaeum Theatre at 773-935-6875.

Jamie, a boy who skips school to avoid playing sports, is attracted to his next-door neighbor Ste, an athletic teen who is regularly beaten by his father and brothers.  One night, Jamie’s mother Sandra offers Ste refuge from his abusive family, setting off a chain of events that changes their lives forever.  Set in a working-class area of southeast London, Beautiful Thing illustrates the struggle of growing up in a world that can be cruel and unforgiving to anyone perceived as different.

Jonathan Harvey (Playwright) comes from Liverpool and now lives in London.  His plays include The Cherry Blossom Tree (Liverpool Playhouse Studio, 1987) which won him the 1987 National Girobank Young Writer of the Year Award; Mohair, Wildfire, and Beautiful Thing, winner of the John Whiting Award 1994; Babies,winner of the George Devine Award 1993 and Evening Standard’s Most Promising Playwright Award 1994; Boom Bang-A-Bang, and Rupert Street Lonely Hearts Club.  Jonathan is currently working on several projects including a new television series and a musical with the Pet Shop Boys.

John Nasca (Director) is co-founder and Artistic Director of Glitterati Productions and an Artistic Associate for Pride Films and Plays.  His directing credits includeGypsy, Moon Over Buffalo, No, No, Nanette, Love Sucks!, and the staged readings of Beautiful Thing, Mr. Shaw Goes to Hollywood, The Ritz, Save the Date, Maurice, Hello Norma Jeane, and Visalia.  John is also a 3-time Jeff-recommended costumer for Vampire Lesbians of Sodom, Anyone Can Whistle, and Die! Mommie, Die!, and the proud recipient of After Dark and Broadway World awards.  His costume work also includes Noises Off, Metropolis, Phantom, Poseidon: An Upside-Down Musical, Follies, The Miracle Worker, Chicago, The Little Foxes, Rigoletto, The Great White Hope, Tintypes, The Women, and On the Waterfront.

Pride Films and Plays, based in Chicago, links an international network of writers with professionals working in film and theater. PFP fosters excellent writing for the stage and screen that speaks not only to the LGBT community, but is essential viewing for all audiences.

Beautiful Thing is the second production of PFP’s season, following the Jeff- recommended world premiere of At the Flash by Sean Chandler and David Leeper, which runs through December 16 at Center on Halsted’s Hoover-Leppen Theatre. For tickets, visit www.brownpapertickets.com.

The final production in Pride Films and Plays’ season is the world premiere of the World War II musical Under A Rainbow Flag by Leo Schwartz, running March 23 to April 21 at The Main Stage, 4139 N. Broadway.

Additional information can be found at www.pridefilmsandplays.com.