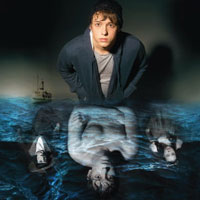 Rupert Holmes is one of theatre’s most prolific playwrights and composers. From The Mystery of Edwin Drood to Curtains, Mr. Holmes has the uncanny ability to create a theatrical experience that stays in your collective memory for a lifetime. With his 1992 play Solitary Confinement being remounted at the Jedlicka Performing Arts Center through November 15th, Mr. Holmes discusses his amazing career.  Additional podcast photo credit: Michael Brosilow (Solitary Confinement)

Rupert Holmes’ first work for theater was The Mystery of Edwin Drood, for which he created the book, music, lyrics and orchestrations. When Drood won the Tony Award for Best Musical, Holmes simultaneously became the first sole recipient of Tony awards for both Best Book and Best Score. Drood and Holmes received the same honors from the New York Drama Desk, with a fourth award going to Holmes in the additional category of Best Orchestration. Holmes also received the coveted Edgar Award from the Mystery Writers of America, the first Broadway author-composer to be so honored. Accomplice is his second work for theater and his first non-musical.  Holmes is also an accomplished singer/songwriter who is widely known for his number one pop hit “Escape (The Piña Colada Song)” and the song “Him”, which reached the number 6 position on the Hot 100 U.S. pop chart in 1980.  More information on Mr. Holmes can be found at www.rupertholmes.com.