Podcast with Playwright DANNY BERNARDO from SHOWBIZ CHICAGO on Vimeo. 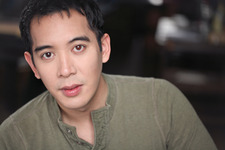 Danny Bernardo (Resident Playwright) is Social Media Manager and a resident playwright at Bailiwick Chicago. He has worked as actor or on production with such companies as the Goodman, About Face Theatre Co., Victory Gardens, Lifeline Theatre, Silk Road, Oak Park Festival Theatre, Collaboraction, Emerald City, Rasaka and Porchlight Music Theatre. He has also served on faculty with After School Matters/Gallery 37, The Chicago Academy for the Arts and Metropolis Performing Arts Center: School of the Arts. Bernardo serves on the League of Chicago Theatres’ Diversity Committee, for which he recently moderated a panel on Asian American inequities in theatre featuring David Henry Hwang and Chay Yew. His training comes from Columbia College Chicago, Second City, American Conservatory Theater and the Las Vegas Academy of the Arts.

Bailiwick Chicago Theater concludes its 2012/13 season with the world premiere of the family drama MAHAL by Resident Playwright Danny Bernardo, directed by Erica Weiss, plays to August 2, 2013 at Stage 773, 1225 W. Belmont Ave. in Chicago. Tickets are available at www.stage773.com, in person at the Stage 773 Box Office or by calling (773) 327-5252.

MAHAL is a new play about how one Filipino American family redefines itself after loss and reclaims their culture. One of the first plays about a Filipino American family, MAHAL centers on the Reyes family dealing with the loss of their matriarch. As new relationships blossom and family bonds are tested, a long forgotten secret from the homeland threatens to tear the family apart. Dealing with themes of cultural identity, assimilation, homophobia, interracial and inter-generational relationships, MAHAL examines what it truly means to be an American family.

“At its core, Mahal is a family story that all audiences will be able to relate to, laugh at and be touched by,” comments Bailiwick Chicago Artistic Director Lili-Anne Brown. “We all appreciate the quirks and treasures of ‘family,’ and Resident Playwright Danny Bernardo understands the need for powerful dialogue with a refreshing flair for creating the dramatic, comedic and poignant moments that surround the family dynamic. We are truly excited to be presenting an insightful new work by a Filipino American artist that features true-heritage casting. Audiences will leave feeling like they know a little bit more about a culture that’s not represented on stage very often, and to us that is one of the most powerful aspects of this piece,” adds Brown.