Podcast with Director/Choreographer SERGIO TRUJILLO from SHOWBIZ CHICAGO on Vimeo. 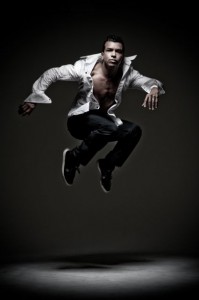 Broadway In Chicago is thrilled to announce full casting for the upcoming national tour of FLASHDANCE – THE MUSICAL, the stage adaptation of the 1983 hit film that defined a generation.  Joining Jillian Mueller as Alex Owens and Matthew Hydzik as Nick Hurley are Katie Webber as Tess, Kelly Felthous as Gloria, DeQuina Moore as Kiki, Jo Ann Cunningham as Hannah,David R. Gordon as Jimmy, Matthew Henerson as Harry and Christian Whelan in the role of C.C.  FLASHDANCE – THE MUSICAL will perform at the Cadillac Palace Theatre (151 West Randolph) for a limited engagement from Aug. 6 – 18, 2013.

With electrifying dance at its core, FLASHDANCE-THE MUSICAL tells the inspiring and unforgettable story of Alex Owens, a Pittsburgh steel mill welder by day and a bar dancer by night with dreams of one day becoming a professional performer.  When romance with her steel mill boss threatens to complicate her ambitions, Alex learns the meaning of love and its power to fuel the pursuit of her dream.

Celebrating its 30th Anniversary, the original Paramount Pictures film was a worldwide smash hit that became a pop culture phenomenon, grossing over $150 million and featuring a Grammy Award-winning soundtrack.  FLASHDANCE – THE MUSICAL features a score including the hit songs from the movie, all of which became Top Ten hits on the radio around the world  including the Academy Award-winning title song “Flashdance – What a Feeling,” “Maniac,” “Gloria,” “Manhunt,” “I Love Rock & Roll.”  In addition to these hits, 16 brand new songs have been written for the stage.

The performance schedule for FLASHDANCE – THE MUSICAL is as follows: