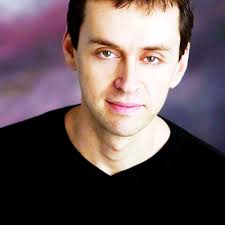 One of our favorite guests, composer Andrew Lippa discusses his newest production, BIG FISH, which is having its pre-Broadway tryout in Chicago.

BIG FISH, a new musical based on the novel by Daniel Wallace and the 2003 Columbia Pictures film written by John August, will have its pre‐Broadway world premiere at Chicago’s Oriental Theatre (24 West Randolph Street) in a limited 5‐week engagement beginning performances Tuesday, April 2, 2013, opening Friday, April 19, 2013, and playing through Sunday, May 5, 2013. Tickets for the Chicago engagement are on‐sale now.

A rollicking fantasy set in the American South, BIG FISH centers on the charismatic Edward Bloom (Butz), whose impossible stories of his epic adventures frustrate his son Will (Steggert). As Edward’s final chapter approaches, Will embarks on his own journey to find out who his father really is, revealing the man behind the myth, the truth from the tall tales. Overflowing with heart, humor and inventive stagecraft, BIG FISH is a tribute to the power of family, dreaming big and the unpredictable adventure of life itself.

BOBBY STEGGERT (Will Bloom) was most recently seen in Giant at The Public Theater and at Lincoln Center in A.R. Gurney’s The Grand Manner. He was nominated for a Tony Award, Drama Desk Award, Outer Critics Circle Award, and a Drama League Award for his performance as Mother’s Younger Brother in the Broadway revival of Ragtime, a role that he originated in the acclaimed Kennedy Center production. He appeared alongside Audra McDonald in the Broadway revival of 110 in the Shade, for which he received an Outer Critics Circle nomination. He also received Drama Desk and Drama League nominations for his performances in Yank!andThe Slug Bearers of Kayrol Island at the Vineyard Theater. Other notable New York credits include The Minister’s Wife (Lincoln Center Theater), Mordred in Camelot (NY Philharmonic, Live at Lincoln Center), Master Harold…and the boys (Broadway), columbinus (New York Theater Workshop, Drama League nomination for ensemble), The Music Teacher (The New Group), Yank! (Gallery Players, NY Innovative Theater Nomination for Lead Actor) and the workshop of a revised Side Show directed by Bill Condon. Regional appearances include The Kennedy Center, L.A. Theaterworks, Repertory Theater of St. Louis, Milwaukee Rep, Pioneer Theater, Olney Theater and Walnut Street Theater. Film/TV: The Namesake, Game Six, Night Swimming, Kinsey, For Richer or Poorer, “The Good Wife,” and a year as Sam Grey on “All My Children.” He is a graduate of NYU and studied Shakespeare at the Royal Academy of Dramatic Arts (RADA). He had the honor of performing at the New York Philharmonic’s Sondheim: The Birthday Concert which aired on PBS.

KRYSTAL JOY BROWN (Josephine Bloom) was most recently seen on Broadway as OrnellaSturdevant in Leap Of Faith and in Hair. Ms. Brown played Mimi in the National tour of Rent. Off‐Broadway she played Eve in Falling for Eve at The York Theatre. Selected regional credits include Ornella in Leap of Faith at Los Angeles’ Ahmanson Theatre, Rosanna in Calvin Berger at the George Street Playhouse, and Crystal in Little Shop of Horrors (John W. Engeman). TV credits include: “Castle,” “Storyforia.”

BRAD OSCAR (Amos Calloway) Brad Oscar was nominated for a 2001 Tony Award® for his role as Nazi playwright Franz Liebkind in The Producers. He has appeared in several productions at Arena Stage in Washington, DC. In 2005, he played The Devil (Mr. Applegate) in Damn Yankees, and in October 2006 he played Master of Ceremonies in Cabaret. He played multiple roles, including Lady Enid in The Mystery of Irma Vep in 2008.