When marriages fail due to infidelity, it is earth shattering and heartbreaking to the innocent parties, devastating and life changing to any children involved, and ultimately not always the answer for resolving bad marriages.  Every time I learn of friends and family’s relationship or marriages ending due to infidelity, it makes me sad and a little angry. I am not sad only because the relationship has abruptly ended, but because the cheating parties are not thinking how it will effect others in their lives, mainly the children. This is especially true when the children of both parties are forced to be blended together and their life is never the same again. This sad result is due to all of bad decisions, selfishness, and egos of the cheating parents.  The remaining parties are never the same and they have a difficult time trusting any future relationship.

The Barebones first co-production with Interrobang Theater Project for the debut performance of “Orange Flower Water” explores the difficult aspects of infidelity. This intimate, yet raw and intense performance examines the lives of two couples; David and Cathy, and Beth and Brad.  Both couples live in the same suburb, their kids go to the same school, and they frequent the same coffee shops, video stores and are soccer moms and dads who both exist in bad marriages.

Cathy and David have a lifeless marriage. Cathy, (played by Cyd Blakewell) is very dedicated to being a music teacher at the school and directing a choir. David, (played by Keith Neagle), is the highly visible town pharmacist. Cathy is very matter of fact, and very task oriented when it comes to providing direction to David for what needs to be done. These tasks are making lunch for the kids, carpooling, and running errands. There is very little affection and comfort, it is strictly the business of managing the family, with little romance or love.

Beth and Brad’s relationship is volatile. Beth, (played by Ina Strauss) is very sweet, and a very passive housewife. She is a good mother who has a strong faith in God. Her husband Brad, (played by Joseph Wiens) is a crude insulting ego maniac, who is an obnoxious pig with a wandering eye. Their life together is all about David who owns a video store, is a sports fanatic who is one of those dads at the soccer field who yells at everyone, and leers at all of the attractive women.  His main conversation with Beth is to keep the kids quiet during football games. David is a jerk who should never be married, nor should anyone marry him. 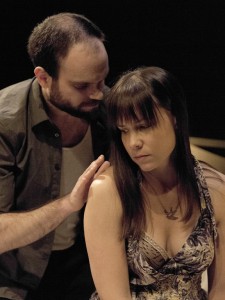 David and Beth, who live in the same community, meet through their kids’ soccer games. They see each other for several years and finally rendezvous to make love to escape their loveless marriages. When they are together, they fantasize ab

out how wonderful their life would be if they were together without their spouses.  However, Beth’s faith and connection with God provides guilt that she has trouble dealing with.  David, on the other hand, is an atheist who does not have any guilt. He is caught up in the moment, the romance, and the affair.  The burning loins of David and Beth do not think of the consequences for their actions and how it will effect the lives of their families, particularly their children who play soccer together.

When Beth has her fill of Brad’s obnoxious abusive behavior she decides to leave him. Brad then tells Beth he knows of her affair with David and flies into a scary rage.  After Beth leaves him, Brad calls Cathy and tells her that David and Beth are having an affair. The remainder of the story possesses the crash and burn results of Beth and David’s infidelity.

“Orange Flower Water” is wonderfully directed by James Yost and Jeffrey Stanton. Both co-directors provide the realism of David and Beth’s affair and the many unfortunate consequences involved. They have all four actors on stage simultaneously and a bed strategically placed center stage throughout the performance. The bed is as much of a focus, as the actors. There are four chairs placed on stage. When the characters are off center stage, Yost and Stanton position the injured parties and the adulterers facing each other, which is very powerful. This production is presented at the smaller theater inside the Raven which created a very intimate setting making the story very real.

The acting from Cyd Blakewell, Keith Neagle, Ina Strauss and Joseph Wiens is excellent. Joseph gave a very compelling performance as the jerky Brad, where you hated him and couldn’t wait for Beth to dump him. Cyd Blakewell was believable as well playing the scorned wife, where she takes sexual control, prior to David’s departure.  Cyd’s character is a bitchy cold fish, but effectively turns the tables on David. Ina Strauss is very effective in her performance as Beth, as the abused wife looking for the love of a man who appreciates and loves her. She also displays her immense guilt for following her heart. Finally, Keith Neagle is David who is looking for love but wants it all. He has difficulty settling for the various consequences for leaving his family and beginning a life with a new woman and her family.  In the final scene, David reads a letter to his  daughter Lily, who he fathered with Beth. In the letter he states a story where Lily spills some orange flowered water in the car and the smell fills the car. David recalls the story of fantasizing that smell with Beth when they were first together.  Having Lily, and finding his love with Beth, David has faced the challenges that have come with their relationship. David now feels all is right, and Lily has brought he and Beth to happiness.  Hence, the title for the play, “Orange Flowered Water”.

“Orange Flowered Water” is a good story, very true to life, and illustrates a compelling journey for happiness through infidelity and bad decisions. I recommend this production; it may even educate others who may be in similar situations

“Orange Flowered Water” is appearing at the Raven Theater 6157 N. Clark Street Chicago Thursday- Saturday at 8:00 p.m. and Sundays at 3:30 through June 9.   Tickets may be purchased at the box office by calling 773-338-2177 or on line at (http:www.raventheater.com). For calendar information, visit TheatreInChicago.com