The Odd Couple’s Oscar Madison and Felix Unger are two of the most recognizable characters in popular culture.  Neil Simon’s 1965 creation of two bachelor best friends, one who is a slob and one who is a neat freak, has found great success in all three of the big mediums; stage, screen and television.   The Odd Couple has spawned sequels, revivals, hundred of thousands of dinner/community theatre productions, an African-American version, a female version and even gay version (or gayer version as some would argue). Even two Sesame Street Muppets owe their existence to The Odd Couple.  In Northlight Theatre’s latest mounting, the reason for the mass success of Mr. Simon’s work is self evident.  The writing is shear genius and stands as one of the best comedies ever written.

This production was to be built on star power casting with veteran actor George Wendt playing opposite Tim Kazurinsky, and the buzz was instant.  Unfortunately, Mr. Wendt’s health became compromised and had to drop out several weeks ago.  The show must go on and stalwart Marc Grapey, who made his Broadway debut with Matthew Broderick and Nathan Lane in the revival of The Odd Couple has stepped in as Oscar to save the day, and save it he does.  This is a very sincere and grounded production which focuses itself on the human element of loneliness rather than the over the top comedy many productions fall prey to.

The Odd Couple finds Felix, a neat freak, being thrown out of his house by his wife after twelve years of marriage.  He moves in with his friend Oscar, a divorcee who is a mess in every sense of the word.  Oscar is financially incompetent, disorganized and a slob.   As roommates, their friendship is tested in hilarious ways . By the end of the play both make each other better people, each able to emotionally deal with the next chapter of their lives.  In between, we see their poker playing caught in the middle of their squabbles as well as their female neighbors whom with the boys get to test out their new bachelorhood. 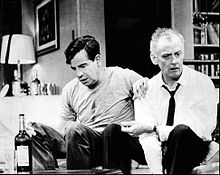 As this is a story about relationships, the play succeeds or fails with the chemistry of the two leads.   Even though the rehearsal time was rushed because of the replacement situation, Mr. Kazurinsky and Mr. Grapey have some fun moments together.  However,their comic timing needs a little more polish  which will come with some more performances under their belt.  Mr. Kazurinsky was cast with Mr. Wendt who are near the same age, as such this Felix is a bit too old against Mr. Grapey’s Oscar, but that is a minor qualm in an otherwise very solid production.

Director BJ Jones keeps to the basics, which is more than fine since the script needs little help when there are great leads and supporting actors to broadcast Mr. Simon’s words.  And the supporting actors are sensational, in fact some of the best casting of these roles I have ever witnessed.  William Dick is great as the neurotically punctual Vinnie; Bruce Jarchow as the easily annoyed Roy; Peter DeFaria (fresh off the revival of A Steady Rain) is hysterical as Murray the Cop, and scene stealing Phil Ridarelli as terrific Speed (who also could very easily fill the role of Oscar); while Katherine Keberlien and Molly Glynn do comic justice to the Pigeon sisters.

For those who have never seen the stage production of The Odd Couple, get ye to the Northlight Theatre to see why Neil Simon’s masterpiece endures, now with Mr. Kazurinsky and Mr. Grapey putting their own mark on these characters once embodied by Art Carney, Walter Matthau, Jack Klugman, Tony Randall, Nathan Lane and Matthew Broderick.