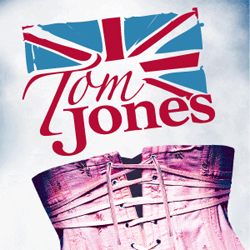 Northlight Theatre, under the direction of Artistic Director BJ Jones and Executive Director Timothy J. Evans, continues its 2013-2014 Season with Tom Jones, adapted by Jon Jory from the novel by Henry Fielding and directed byWilliam Brown.  The production will run at Northlight Theatre, 9501 Skokie Blvd in Skokie, from January 17 – February 23, 2014.

Tom Jones is an amiable young rascal with a fondness for the fairer sex…and for getting into trouble. Caught succumbing to the charms of local girl Molly and the refined Sophia, poor Tom is banished by his benefactor and sets off on a whirlwind of misadventures in this new adaptation of Henry Fielding’s classic novel, a charming tale full of timeless wit and good old-fashioned, bawdy fun.

Northlight favorite William Brown returns to direct Jon Jory’s new adaptation of the beloved novel.  Northlight audiences will remember Jon Jory’s previous adaptation of Sense & Sensibility.  The Northlight production will be the second-ever for this adaptation, which celebrated its World Premiere in fall 2013.

“The collaboration of Jeff-nominated playwright Jon Jory and Jeff Award-winning director Bill Brown is an irresistible combination of style, swashbuckling thrills and sexy humor. These two Northlight veterans bring their considerable skills back to our stage in a new adaptation of Henry Fielding’s lusty comic classic,” says BJ Jones.

WILLIAM BROWN (Director) returns to Northlight where he has directed Lady Windermere’s Fan, The Chalk Garden, and his own adaptation with music of She Stoops to Conquer. At Writers Theatre he has directed The Liar (Joseph Jefferson Award for Best Director), A Little Night Music, Heartbreak House, As You Like It, Another Part of the Forest, Arms and the Man, Our Town, Rocket to the Moon, Misalliance, The Glass Menagerie, and Incident at Vichy as well as the world premieres of Brett Neveu’s Old Glory and Do the Hustle. He directed and wrote (with Doug Frew) To Master the Art for TimeLine Theatre, which was remounted this fall at the Broadway Playhouse. Also at TimeLine, he most recently directed the world premiere ofWasteland by Susan Felder. He directed Skylight at Court Theatre and Fallen Angels at Indiana Rep. He has directed 14 productions at American Players Theatre in Spring Green, including All My Sons, Troilus and Cressida, The Critic, Hay Fever, The Comedy of Errors, Night of the Iguana, and The Matchmaker. Brown received a Joseph Jefferson Award for Best Actor for his portrayal of Henry Kissinger in Writers Theatre’s Nixon’s Nixon. He received a 2010 Spirit of Diversity Award from Actors’ Equity.

JON JORY (Adapter) was the producing director at Actors Theatre of Louisville from 1969 until 2000 and was the founding artistic director of Long Wharf Theatre in New Haven. Jory has directed widely in America and abroad. Jory is the author of four books on acting and directing. The most recent, Teaching the Actor Craft, was published in July. His adaptations of Jane Austen’s novels have been produced across America and in eleven other nations, most recently South Korea. He has been inducted into New York’s Theatre Hall of Fame. Jory teaches at Santa Fe University of Art and Design.

CHRIS AMOS (Ensemble) makes his Northlight debut. Chicago credits include American Theatre Company, Chicago Shakespeare, Provision, and BoHo. Regional credits: Utah Shakespeare (including Slank in the regional premiere of Peter and the Starcatcher), and multiple seasons at Illinois Shakespeare (including Demetrius in A Midsummer Night’s Dream, Octave inScapin, and Trinculo in The Tempest). He holds an MFA in Acting from the Theatre Conservatory at Roosevelt University, and BAs in both Music and Theatre from Oklahoma State University.

SAMUEL ASHDOWN (Tom Jones) is making his Northlight debut. Chicago credits include To Master the Art (Chicago Commercial Collective, TimeLine), The Liar (Writers), and Short Shakespeare! Romeo and Juliet (Chicago Shakespeare). Regional credits include Troilus and Cressida, Twelfth Night, Richard III (American Players) and Much Ado about Nothing, The Merchant of Venice, Julius Caesar, and A Midsummer Night’s Dream (Montana Shakespeare in the Parks). He holds a BFA from Southern Oregon University and an MFA from the University of Illinois at Urbana-Champaign. Next up, he will be seen in Henry V at Chicago Shakespeare

MOLLY GLYNN (Ensemble) returns to Northlight, where she appeared in The Odd Couple and Permanent Collection. Credits include: Middletown, Orange Flower Water, Picasso at the Lapin Agile (Steppenwolf); The Uneasy Chair (Writers); Maple and Vine, The Boarding House (Next); Kate in Short Shakes! The Taming of the Shrew (Chicago Shakespeare); Unnecessary Farce,The Comedy of Errors (First Folio); Love and Drowning (16th Street); Heritage, Strictly Dishonorable (American Blues Theatre);That Was Then, And Neither Have I Wings to Fly (Seanachai); Homecoming 1972 (Chicago Dramatists); Suburban Motel,Hellcab (Famous Door); and work at The Goodman, Remy Bumppo, Apple Tree, and Peninsula Players. TV/Film: Boss (Starz),Early Edition (CBS), Something Better Somewhere Else, No Sleep ‘til Madison. Molly is happily married to actor Joe Foust.

MELANIE KELLER (Ensemble) previously appeared at Northlight in in A Life. Most recently, she was at the Michigan Shakespeare Festival where she played Viola in Twelfth Night and Kate in She Stoops to Conquer. She is an artistic associate with First Folio where her credits include The Merchant of Venice, The Turn of the Screw, Design for Living, Angel Street, Private Lives, and The Importance of Being Earnest. Melanie is also a member of Signal Ensemble Theatre and is the winner a Jeff Award for Best Actress in a Principal Role for East of Berlin and The Russian Play. Other Signal credits include The Weir (Jeff Nomination-Best Supporting Actress) and Much Ado about Nothing. Other theatres include Peninsula Players, Chicago Shakespeare, and Next. She was the 2007-2008 Chicago Associates Fellow at the Stratford Festival of Canada.

JOHN LISTER (Ensemble) returns to Northlight having previously appeared in Lady Windermere’s Fan, Red Herring, Inherit The Wind, and She Stoops To Conquer.  Other Chicago credits include: Show Boat (Lyric Opera); The Crucible (Steppenwolf);Guys and Dolls (Marriott Lincolnshire); six seasons of A Christmas Carol (Goodman); Yellow Moon, Heartbreak House, As You Like It, and as a replacement in The Liar and Hamlet (Writers); Northanger Abbey (Remy Bumppo), and more than a dozen productions with Chicago Shakespeare.  Regional credits include productions with American Player’s, Indiana Rep, Peninsula Players, Notre Dame Shakespeare, and The International Mystery Writer’s Festival.  Film and Television credits include:  Public Enemies (Universal), Prison Break (FOX), and The Beast (A&E).

CRISTINA PANFILIO (Ensemble) is in her first production with Northlight. She makes her home in Chicago with actor Eric Parks and holds a BFA from the University of Illinois at Urbana-Champaign. Recent credits include Hamlet, Rosencrantz & Guildenstern Are Dead, Too Many Husbands, Twelfth Night, Richard III, and Troilus and Cressida at American Players;Educating Rita at Renaissance Theaterworks; Fallen Angels at Indiana Rep; The Merchant of Venice at Notre Dame Shakespeare; Twelfth Night at Chicago Shakespeare; Mirandolina, Seascape, and Laughing Stock at Milwaukee Rep; and five seasons with Riverside Theatre Shakespeare Festival in Iowa City.

ERIC PARKS (Ensemble) is making his Northlight debut.  He lives in Chicago with his wife, actor Cristina Panfilio. He has worked in Chicago with Writers, Goodman, Chicago Shakespeare, and Drury Lane-Oakbrook.  Regionally he has worked with American Players, Indiana Rep, Milwaukee Rep, Nebraska Shakespeare Festival, and Utah Shakespeare Festival.  Eric holds a BFA from Pacific Lutheran University and an MFA from University of Illinois Urbana Champaign.

MARCUS TRUSCHINSKI (Ensemble) is making his Northlight debut.  He has been seen in the Chicago area as Orlando in As You Like It and Rat in Old Glory, both at Writers.  Marcus is a Core Company member at American Players Theatre in Spring Green, where his favorite roles over the past ten seasons include: Chris Keller in All My Sons, Jim O’Connor in Glass Menagerie, Tony in the Royal Family, Puck in A Midsummer Night’s Dream, Antipholous of Syracuse in Comedy of Errors, and Ben Hubbard in Another Part of the Forest.  He has been seen regionally at Great River Shakespeare Festival, Milwaukee Chamber Theatre, and Next Act Theatre.

Bill Brown most recently directed The Port Authority, currently playing at Writers Theatre.  His play To Master the Art, which he co-wrote, recently played at Broadway In Chicago’s Broadway Playhouse.  He recently won a Jeff Award for his direction of The Liar.

The cast is made up of Northlight veterans John Lister (Lady Windermere’s Fan, Red Herring, Inherit The Wind, and She Stoops To Conquer), Molly Glynn (The Odd Couple and Permanent Collection) and Melanie Keller (A Life), along with new faces at Northlight, including Chris Amos, Samuel Ashdown, Nora Fiffer, Cristina Panfilio, Eric Parks and Marcus Truschinski.

Tom Jones is an example of the romantic genre that was popular in 18th-century Britain. However, the inclusion of prostitution and sexual promiscuity in the plot was original for its time, and considered quite scandalous.

Though not to be confused with the popular 1960s singer of the same name, the two do have a relationship: the singer, nee Thomas John Woodward, adopted the name Tom Jones to capitalize on the popularity of the 1963 Academy Award-winning film adaptation.

Now entering its 39th season, the organization has mounted nearly 200 productions, including over 40 world premieres.  Northlight has earned 151 Joseph Jefferson Award nominations and 28 Awards.  As one of the area’s premier theatre companies, Northlight is a regional magnet for critical and professional acclaim, as well as talent of the highest quality.

This production is sponsored in part by Cramer-Krasselt.