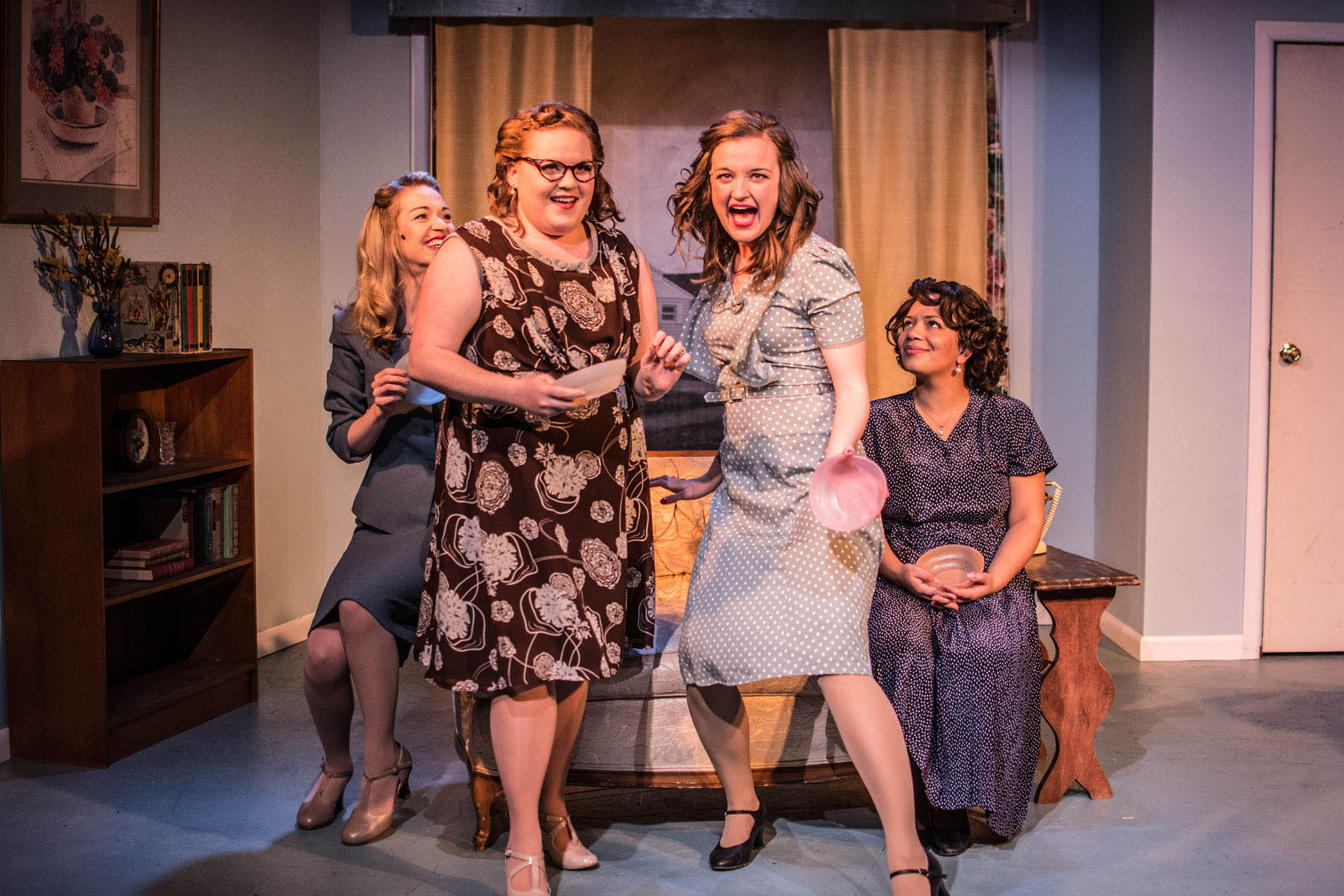 It’s an airtight slice of Americana! The New Colony is pleased to launch its 2014-15 mainstage season with the world premiere musical PLASTIC REVOLUTION at its new permanent home – The Den Theatre, 1333 N. Milwaukee Ave. in Chicago’s Wicker Park neighborhood.  This new musical, based on the company’s 2009 hit production Tupperware: An American Musical Fable, features a book by Will Cavedo and Andrew Hobgood, lyrics by Andrew Hobgood, music by Julie Nichols, direction by Evan Linder and musical direction by Charlotte Rivard-Hoster.  PLASTIC REVOLUTION will play January 16 – February 22, 2015 in The Den’s Upstairs Mainstage. Tickets are available at www.thenewcolony.org.

“After six years of being an itinerant company, we’re so pleased to make The Den Theatre our first permanent performance space,” comments The New Colony’s Co-Artistic Director Evan Linder. “The Den houses some of the absolute best storefront theatre Chicago has to offer, and we are thankful to our new full-time partners there – The Hypocrites and the Irish Theatre of Chicago – who have already made us feel at home. Plastic Revolution will kick off 28 weeks of programming at The Den in 2015 including three full-length productions on the Upstairs Mainstage, along with our side stage offerings. We’re also pleased to retain our offices and rehearsal space at Dank Haus in Lincoln Square, where we’ve presented some of our most successful mainstage productions over the past six years,” adds Linder.

Will Cavedo (Book) is an actor, playwright and Ensemble Member with The New Colony. He first appeared in TNC’s original production of Evan Linder’s FRAT, later reprising his role in Hatmaker Theatrical Productions’ remount of the play. He also appeared in Psychonaut Librarians, TNC’s devised piece for Collaboraction’s Sketchbook 12. He was most recently seen as Adam in TNC’s reWILDing Genius as part of Steppenwolf’s Garage Rep. Will co-wrote TNC plays Tupperware: An American Musical Fable (with Andrew Hobgood and James Asmus) and That Sordid Little Story (with Andrew Hobgood and Benno Nelson), the latter of which won a Non-Equity Jeff Award for Best Original Music. Will has contributed in various ways to TNC’s 2012 mainstage production, Down & Derby; original films, So Many Days and Script Comes Last; and TNC’s contribution to the 2011 “Mash Flob” project at The Museum of Contemporary Art. Will holds a BA in Theatre from The College of Charleston in Charleston, SC

Andrew Hobgood (Book and Lyrics) is the Founding Artistic Director of The New Colony, the Business Strategist for Vosges Chocolate, and an Adjunct Professor of Theater at the University of Chicago. His play, 5 Lesbians Eating a Quiche, won Outstanding Production at the 2012 New York International Fringe Festival before opening as an Off-Broadway production that Ben Brantley of the New York Times called “raw and magnetic dementia…destined to attract a cult following.” 5 Lesbians is now published with Samuel French. Hobgood’s other work with The New Colony includes writing and directing the new musicals Tupperware: An American Musical Fable, That Sordid Little Story and Rise of The Numberless. His directing credits for The New Colony include Amelia Earhart: Jungle Princess, the original and commercial productions of FRAT, Hearts Full of Blood, which won Outstanding Script at the 2010 New York International Fringe Festival, B-Side Studio, produced in collaboration with The Inconvenience and the University of Chicago TAPS program, reWILDing Genius and most recently, Orville and Wilbur Did It! In 2010, Newcity named him one of the 50 People Who Really Perform for Chicago; in 2011, he and The New Colony were honored with the Broadway in Chicago Emerging Theater Award; and in 2013 he and Co-Artistic Director Evan Linder were two of six people on Chicago Magazine’s Cultural Power List of Theater Scene Stealers. His recent play reWILDing Genius was commissioned by the University of Chicago and was produced as part of Steppenwolf’s Garage Rep 2014. When not directing, writing or acting, he can be found working in the Innovation Lab of Vosges Haut-Chocolat, or guest speaking and writing on the topics of Devised/Collaborative Theater, the future of playwrighting and theater, and the Art of Business/Business of Art.

Julie Nichols (Composer) is a Chicago based composer, musical director and sound designer. She recently finished a four-year run as the Musical Director for The Second City Mainstage, composing for and sound designing four revues. Prior to life on the Mainstage, Julie was the Associate Musical Director at Boom Chicago in Amsterdam, The Netherlands. While at Boom, she learned production skills for the highly technical, multi-media theater, while composing and sound designing three of their mainstage revues. Julie currently plays keyboards in The Dead River Revival, composes for commercials and freelances for Second City. She has composed music for corporate videos and events, independent films, TV pilots, musicals, plays and everything in between.

Evan Linder (Director) is a founding member and the Co-Artistic Director of The New Colony. In Chicago, Evan has also had the pleasure of working with Victory Gardens, The Inconvenience, Collaboraction, Bailiwick Chicago, the side project and Bohemian Theater Ensemble. Favorite TNC roles include Kirk in Hearts Full of Blood, Zack in Orville and Wilbur Did It!, Jonathan in reWILDing Genius, Tasty in Down & Derby and Randy in Pancake Breakfast. Also a playwright, Evan’s first play produced in Chicago, FRAT, was named as one of the Best of 2009 in the Chicago Tribune, Windy City Times and Newcity. Other works include 11:11, The Warriors, The Bear Suit of Happiness, B-Side Studio and 5 Lesbians Eating a Quiche, which was named Best Overall Production at the 2012 NYC International Fringe Festival and is published by Samuel French. 5 Lesbians also enjoyed an Off-Broadway run as part of the Soho Playhouse’s 2012-2013 season. His play The Bear Suit of Happiness and his hybrid stageplay/sitcom/webseries B-Side Studio (co-written with Hit the Wall playwright Ike Holter) both received their world premieres in Chicago in 2013. He was recently listed on Chicago Magazine’s 2013 Power List of Theater Scene Stealers

Charlotte Rivard-Hoster (Musical Director) is a music director, pianist and educator based in Chicago. Favorite music direction and performance credits include Methtacular! (About Face Theatre), The Last Five Years (Metropolis Performing Art Center), Songs For a New World (NightBlue Theater), I Can Get It For You Wholesale (Lost Note Theatre), The Light in the Piazza (Berklee) and Carousel (Boston Conservatory). Charlotte has taught with Chicago’s Beverly Arts Center, Studio BE, Theatre of Western Springs, Youth Company Chicago, Metropolis SOPA, Roosevelt’s CCPA and is a teaching artist and accompanist for Merit School of Music’s Bridges Program and Foundations of Music.

About The New Colony