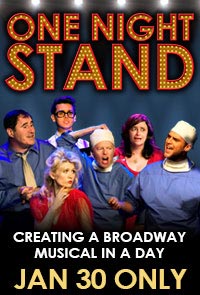 Giving audiences an unbridled and candid look behind the scenes of the Broadway curtain, NCM® Fathom Events, Overnight Musicals and The Broadway League present “One Night Stand: Creating a Play in a Day,” a unique one-night event broadcast to movie theaters nationwide on Wednesday, Jan. 30 at 7:30 p.m. local time. This fast-paced,  hilarious and entertaining film follows some of New York’s top actors, including Cheyenne Jackson (30 Rock, Glee), Jesse Tyler Ferguson (Modern Family) and Rachel Dratch (Saturday Night Live), as well as teams of writers, composers and directors as they are given 24 hours to write, cast, compose, rehearse and perform four short musicals. At the end of the 24 hours, the musicals make their opening, and closing, night at New York City’s Gramercy Theatre. The event will also present exclusive behind-the-scenes footage and interviews with the stars of “One Night Stand” as they share intimate stories of life on Broadway.

Tickets for “One Night Stand: Creating a Play in a Day” are available at participating theater box offices and online at www.FathomEvents.com. For a complete list of theater locations and prices, visit the NCM Fathom Events website (theaters and participants are subject to change). The event will be broadcast to nearly 450 select movie theaters across the country through NCM’s exclusive Digital Broadcast Network.

Four teams consisting of composers, writers, directors and actors use props to inspire the musicals: a zoot suit worn by Richard Kind (Argo, Spin City, Mad About You) on a children’s show in the 1970s inspires the “Islands” musical; a phobia pop-up book is the premise for “Multiphobia” and an 80s prom dress prop is used in “Dr. Williams” featuring Jackson, Ferguson and Roger Bart (Revenge, Desperate Housewives). Dratch brings her comedic timing to the fourth musical, “Rachel said Sorry.”

“I love the whole process of birthing a new musical, from the first rehearsal until opening night, and ‘One Night Stand’ shows it all encapsulated in one day,” said Ferguson. “It’s just so exciting and really quite moving – a crazy birth in one night! You get to see some amazing New York talent on stage, me included.”

“The excitement is palpable as these talented writers, composers and actors work against the clock to bring their musicals from their imaginations to the stage in record time,” said Shelly Maxwell, executive vice president of NCM Fathom Events. “Fans of live theatre will find this one-of-a-kind Fathom Event truly captivating.”

Led by filmmakers Elisabeth Sperling and Trish Dalton, Overnight Musicals LLC is a film production company formed for the express purpose of documenting the annual The 24 Hour Musicals in New York City since the inaugural event in 2008. Each year the company produces a short film, screened to introduce the musicals on the night of the performance. One Night Stand is the first feature-length film produced from this project.

About The Broadway League
The Broadway League, founded in 1930, is the national trade association for the Broadway industry. The League’s 700-plus members include theatre owners and operators, producers, presenters, and general managers who present in nearly 200 markets in North America, as well as suppliers of goods and services to the theatre industry. Each year, League members bring Broadway to nearly 30 million people in New York and on tour across the U.S. and Canada. For more information, visit www.BroadwayLeague.com, or follow The Broadway League on Twitter @TheBwayLeague or on Facebook at www.facebook.com/BroadwayLeague. Download the free ILoveNYTheater app and free IBDB app for iPhone, iPad,and iTouch on iTunes.

Broadway theatres are filled with an exciting array of new and classic musicals and plays, providing the perfect experience for every audience. Great seats are available at every price point and are easy to buy online, by phone, or in person at theatre box offices. It’s always the perfect time to see a show. Broadway performs every day of the week at multiple curtain times to accommodate every schedule.

The Broadway League annually presents the Antoinette Perry “Tony” Awards,® one of the most coveted awards in the entertainment industry, with The American Theatre Wing.