MY ONE AND ONLY Is The Perfect Show for Marriott Lincolnshire

A Gershwin musical set in the 1920’s, a fun story, great music, singing, and tap dancing, what more can anyone want for an enjoyable evening of musical theater.  All of these were present for Marriott Lincolnshire’s fall production of “My One and Only”.  Marriott Lincolnshire Theater, who over the past 30 plus years has produced so many Jeff Award winning musical theater productions, I believe, has done it again with producing another hit.  Executive Producer, Terry James; along with extremely talented Choreographer/Director Tammy Mader produced an energetic and fun-filled production where there is never a dull moment. Everyone leaving the theater after the performance had a big smile on their face.

The Tony Award winning song and dance spectacular, “My One and Only”  contains music by  George and Ira Gershwin, and the book, written by Peter Stone and Timothy S. Mayer brings memorable music, an interesting story, and a cast of fun characters. “My One and Only” is a story about Captain Billy Buck Chandler, a barnstorming aviator, and Edythe Herbert, an ex-English Channel swimmer and the star of Prince Nicolai’s International Aquacade. Through a series of adventures and misadventures, their romantic pursuit is thrown off course, but together they are able to navigate their way to a happy ending. This spectacular musical which features the music and dancing talents of Andrew Lupp, as Billy Buck Caldwell; and Summer Naomi Smart, as Edythe Herbert proved to be brilliantly casted. Both Andrew and Summer were believable in bringing their parts as Billy and Edythe to the stage. A high point of the evening is where Billy and Edythe are stranded after their airplane was sabotaged by Prince Nicky and they landed on an island together. Realizing that they are meant for each other, they sing S-Wonderful and perform a dance number in the water that surrounds the island. Marriott always willing  to please with their staging, had water around the island where Billy and Edythe danced and splashed around creating a very real experience for audience members who were seated in the first two-three rows. It was sort of the same experience as Blue Man Group but without the provided raincoats. The audience enjoyed it, and didn’t seem to mind the damp experience.

Musical numbers featuring the greatness of the Gershwin brothers included “I Can’t be Bothered Now”, “Blah BlahBlah”, “Boy Wanted/Soon”, “He Loves and She Loves”, “ High Hat”, “Nice Work if You Can Get It”, ”Strike Up the Band”, ”Funny Face”, “Kicking the Clouds Away”, “S Wonderful”, and of course “My One and Only”. The only regret that I have with the way this show is written is that it did not include more Gershwin songs rather than reprising many of the songs through the show.  I wanted to hear more. 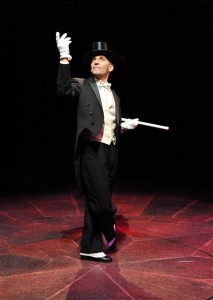 Other cast members included Quinn M. Bass, Jarran Muse, Clinton Roane as the “The Rhythm Boys” who set the mood for this enjoyable show. From the beginning, and throughout the show, their tap dancing excellence made this show very enjoyable. I will have to say aside from the talented cast and ensemble, these gentlemen were a huge asset to this show in making it a hit. I loved watching and hearing them.  This is not to say that the rest of the ensemble were not as talented, because they gave 110 percent as well!  My favorite number is the dancers performing “High Hat” in black light with tails, white shirts, spats, and glowing canes.  Along with the cast and the Rhythm Boys, Ted Louis Levy, as Mr. Magix who provided Billy with advice of how to win Edythe’s heart. Through his tap dancing expertise, Mr. Magix taught Billy very smooth moves. Ted’s portrayal did not only stay with the stage, he played to the audience and he was very successful in doing so.   Andrew Lupp and Ted Louis Levy’s chemistry were flawless!  The ensemble also included Marriott veterans, Paula Scrofano as the mechanic Micki and Roger Mueller as Prince Nicky.  Their characters and performances are always a delight and provided some added comic relief.  Last but not least, the great Felicia Fields was dynamic in her portrayal as Reverend Montgomery.  Her character was uplifting and had the audience clapping and stamping their feet to her performance succeeding to make the audience believers.

My One and Only is a perfect show for Marriott Lincolnshire. The “in the round” stage provides a great view for the dancing talents of the cast.  The venue provides an “up close and personal” experience that you are not able to experience at a traditional theater.  My only concern was with blocking during one part of the show, where there is a beauty pageant.  Reverend Montgomery who is the announcer, was directed to a location that blocked the cast from where she was standing.  Had Felicia Fields been positioned at the opposite end of the stage, I don’t believe the cast members would be obstructed.  In seeing many productions at Marriott Lincolnshire, this issue periodically repeats itself. Perhaps the directors should position themselves at various places in the house while blocking the scenes to see if there is a solution or a better option to this problem. I do know that staging a show in the round is no easy task, and the directors did accommodate quite well. This was especially apparent, during a movie scene where the cast is seated on the movie seats, and were rolled around on rollers so they were seen from all angles. Fortunately, blocking was not a huge issue for this show. However, the directors should constantly be vigilant of some unforeseen problems, in the future.

After the performance, I kept replaying “My One and Only “ in my mind.  I kept thinking why did I enjoy this show so much? Why was it such a great experience? My conclusion was, it is a damn good show! Without discounting the talents of the musical “42nd Street”, I really do believe that “My One and Only” is a much better show. In my opinion, the music and story are much more interesting, not to mention the fabulous tap dancing. Besides, how can you go wrong with Gershwin?

My One & Only runs through January 6, 2013 at the Marriott Theatre In Lincolnshire  at 10 Marriott Drive, Lincolnshire, IL.  The performance schedule is Wednesdays at 1:00 p.m. and 8:00 p.m., Thursdays and Fridays at 8:00 p.m., Saturdays at 4:30 p.m. and 8:00 p.m., and Sundays at 1:00 p.m. and 5:00 p.m.  Special added holiday and New Year’s Eve performances. Ticket prices range from $40 to $48, plus tax and handling fees. Seniors and students receive $5.00 off a full price theatre ticket on Wednesday at 1:00 p.m., Saturday at 4:30 p.m. and Sunday at 1:00 p.m. and 5:00 p.m. On Wednesday and Thursday evenings a limited number of Dinner and Theatre tickets are available for $55.00 per person plus handling fees. Dinner is at Kings Wharf Restaurant. Free parking is available at all performances. To reserve tickets with a major credit card, call the Marriott Theatre Box Office at 847.634.0200 or www.TicketMaster.com. Visitwww.MarriottTheater.com for more information.